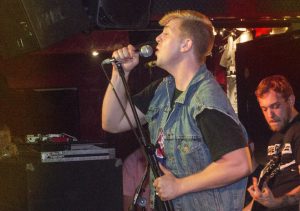 From lifting weights to advocating for same sex marriage, Chris #Martin of #Hostage Calm found the time to sit down with Fusion to talk about his experiences on tour and being an ally for the GSM community.

How’s the tour going?
It’s been sweet! We are on tour with #Saves the Day and Into It. Over It.

So y’all have been on tour for about a month; that’s rough.
Well, we are lucky to play packed shows with legends of the genre every day and our friends with II.OI. We couldn’t really ask for anything more. That’s kind of the dream of why you start a band, to play on an epic memorable tour and get to play for all these kids tonight.
Is this one of your biggest tours that you have been on?
It’s the longest for sure. I think it’s certainly one of the most musically significant because this package between Saves the Day, II.OI., and us represents this creative explosion that happened in the 90s and is happening right now: this common thread of not just the musical experimentalism, but also this pop catchiness and the challenging of the environment. You know, attitude. There is something very special about this tour.

What is the best state that has the best rest stops?
I have been to the New Jersey ones so many times. I have gone up and down the Jersey pike and I used to live in Connecticut and then moved to Baltimore, and I have been to each one of the rest stops on either side multiple times- at least 100 times. New Jersey’s rest stops are okay, but I have to say, not just because I am in Ohio, but there are some really good Ohio rest stops. There is one in Ohio, that has a 24-hour Starbucks, which has been a godsend in some epic overnight drives. Also there is Little America in Montana, maybe Wyoming- I can’t remember. It is one of the most peculiar rest stops, almost eerie because you are in the middle of nowhere, with a state that has like 700,000 people. So there is this GIANT Pleasantville themed house with little knick-knacks and ice cream cones for fifty cents. There are some in the South East that have llamas and live stock right next to the stop.

What is a current pop song, or any song that you would like to cover?
There is nothing of the current pop that I am drawn to, but we have covered the Clash and the Descendants in the past. I could see us doing a Springsteen cover, “Born to Run.”

Who controls the Twitter page?
I do, and it’s the only one I control. We didn’t mean to divvy them up, but we kind of have fallen into our own social media to control for the band. It started out as a way to connect to the fans, and we first saw Twitter there was a sense of, “Are we doing this because bands do this?” or “Are we doing this because we want to interact with the kids coming to our shows, or even the kids who can’t come to our shows?” People from Jakarta, Indonesia can’t come to our shows because we have yet to tour there. [Social media] gives us a chance to get a sense of connection to the fans and it’s helped amplify our band’s social justice agenda. Not even through a serious tone- through trolling and through mocking the news. It’s a nice outlet for the 21st century.

How has being outspoken about your support for same sex marriage affected your success as musicians? Any backlash?
It cuts both ways for sure. In the underground scene, I think there is a lot of dormant support for the entire GSM inequality issue.  I think there was a lot of dormant support in this scene because there is this sense of creativity, individuality, the importance of selfhood, the importance of tolerance and respect.  There just hadn’t been the outspokenness or activism to unite all these people who would love to get involved. So in the underground scene, it has been very pleasant getting to meet all these people who have the same goals in order to feel like we are accomplishing something with the our involvement in the New York same-sex petition and other demonstrations for marriage equality.  We are honored to be involved and help connect those dots.

As for any backlash? I am pretty sure when it comes to some bigger labels looking at our stuff, they probably look at our involvement and prefer us to not be outspoken about this topic.  There was a church protest at one of our shows once in Florida. It’s kind of awesome, but I didn’t get to see it because I was warming up backstage.

I know you support the cause, but does the whole band feel the same way?
Absolutely.  It wasn’t our goal to become this voice of the underground scene on the issue of GSM inequalities. It started out as us writing a few songs about the topic and a slew of other issues in our society.  We had the option to do a few successful demonstrations and we feel that people really latched onto our songs “Ballots and Stones” and “May Love Prevail.”

It was kind of like the perfect storm. We weren’t saying that we were the chosen ones to speak about the issue. What happened was we did speak and people listened. We are honored for that; it takes a village. It’s not something one band can do. It’s something, as a scene, that can expand our reach.

Have you found a positive response from the fans of your band?
Oh definitely. In any scene, from Warped Tour to a hardcore show to a pop punk show, we have scene support. This a testament to having the courage to speak out. The “I Support Same Sex Marriage shirt” can been seen at our shows.  We thought one day, “Man, wouldn’t it be great if there was a shirt that boldly accepted one of the obvious social justices going on right now?” We made that shirt and have found a very positive response, especially from the fans.

Do you think scenes, like Warped tour or hardcore, have become more progressive in accepting of GSM issues?
I think a tide is turning across our generation. There continues a need to tie the same sex marriage issue into the whole fabric of GSM inequality. I think there is a general expansion of understanding happening, but there is so much left to do. Yes, the scene is becoming more tolerant, but there is still a need to keep trucking.

Fun Fact that fans do not know about you?
It’s not a huge secret, but I am recently big into lifting weights. To me this totally ties into punk, the bravado and full on fucking commitment to what you are doing that I think lives in the weight room as much as it does on the stage.

You can check out more from Chris Martin and his bandmates on social media:

Words by Wesley Koogle, Alyssa Maziarz, Drew Kazdin and Abigail Silvis #Intersectionality is an important issue to recognize in the #LGBTQ+ community. The…