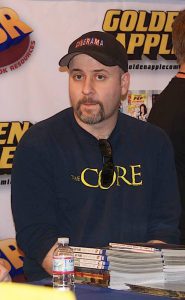 Award-winning #DC #Comics writer Marc #Andreyko inherited the “#Batwoman” series in September. Since then, the openly gay #Kent State alum has made appearances at comic book conventions across the country. Andreyko talked with Fusion about writing for DC, his time at Kent State and the homophobia (or lack thereof) in modern comics.

I noticed in “#Torso”, in one of the fictionalized scenes, your characters are discussing homosexuality, disproving it as a “perversion.” How has your sexuality influenced your work as a comic author? Or has it at all?

Well, the characters talking about homosexuality reflected the beliefs of the 1930s. As you can see in the book, Sam is one of the most heroic characters. It would have been disingenuous to have him be an “out and proud” man back then.

As far as my sexuality influencing my work, well, of course it does. Being gay when I was a teen was akin to having a secret identity and made me relate to superheroes in a visceral way. Does that mean everything I write is “gay”? No more so than a straight writer’s work is straight or a black writer’s work is black. It is a facet of who I am as a man and a writer, but by no means the only facet of who I am.

With rumors of homophobia within the DC Universe, was it difficult to establish legitimacy as an author? Is the comic book community a GSM-friendly one?

Let me squash that one right now: DC is most definitely not homophobic. In fact, DC has been ahead of the curve on inclusion and support for decades. I have never experienced homophobia at all working with DC. In fact, I believe DC has historically had the highest percent of [GSM] creators in mainstream comics. Part of the joy of working for DC is the fact that it is a place where everyone is accepted and celebrated.

The whole homophobia nonsense was one of those internet things that gained traction without any sort of tether to reality. I mean, DC has the only comic book with a gay lead (in the Batman universe, no less) in mainstream superhero comics. Does that sound homophobic to you?

Do you feel you’re an advocate for the GSM community with your work or outside of it?

Absolutely, on both fronts. I try never to write characters for some social agenda. I write characters honestly, be they gay, female, African-American, or heterosexual. Defining a character by a sole trait is both uninteresting and, more often than not, didactic. And, I don’t know about you, but I don’t like being lectured to. By portraying minority characters as just people, I think you gain more thought and acceptance than by writing some saint and/or martyr.

Has there been a favorite piece to work on? Are you more passionate or prideful in creating your own plots and characters or in furthering the legacy of legends, i.e., Batwoman?

I’ve been doing this for almost 20 years now, so that has been my favorite thing! But I do have a few favorite children: “Manhunter,” obviously, because the reaction to her and the book changed my life. It was a dream job; “Torso,” because I got to work with my pal Brian Bendis before he wrote for Marvel; and “The Lost”, which was my first creator-owned book that, hopefully, someday will be completed.

I try to be passionate about everything I write. Prideful? Not so much. I like to mix it up with creating my own stuff and playing with the characters I grew up reading. Variety, as I’ve heard, is the spice of life.

Besides yourself, who’s your favorite writer or artist publishing right now? What do you read?

I never said I was my favorite! There are so many people whose work inspires me and that I admire: Craig Russell, Bill Willingham, Chris Samnee, Ed Brubaker, Mark Buckingham, George Perez, Ben Templesmith, Nicola Scott, Jill Thompson, Joe Hill, Walt Simonson … And more that I am probably forgetting right now. This is a great time artistically to be in comics and I am just happy to be invited to the party.

Though you now reside in L.A., did your time in Kent and Cleveland influence your work? What did you take with you from Kent State?

Most definitely. My time at KSU shaped a great deal of who I am today. I had a greatly talented group of fellow students in the theatre program who constantly challenged one another to do exciting work. My experiences there made me braver, more focused and excited to keep trying new and often scary creative ventures.

Do you see yourself ever returning to Kent State?

I would love to come back and teach a writing seminar! It would be nice to give back to a place that played such a major part in my life. Are you listening, theatre department?

How often do you return to Cleveland?

I don’t get back to Cleveland very often at all. In fact, I was back for the first time in 14 years last October for my sister’s wedding reception. What can I say? After 27 years in Ohio, I never need to see snow ever again. Seriously.

For more of Marc Andreyko, you can see a list of his work for DC Comics at http://www.dccomics.com/talent/marc-andreyko.

by Brittany #Rees   Last night, an impromptu Pride! parade marched through the sidewalks of #Kent State, after the #Westboro Baptist Church failed to…