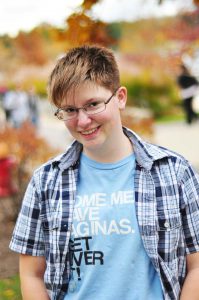 What is the purpose behind the #TRANS*formers club?

It’s just a large group where we can find acceptance for people who are outside of the typical gender binary, people who aren’t strictly male or strictly female. There are not a lot of safe places for that sort of thing on campus.

How did you first become involved with TRANS*formers?

One of my best friends started it at the beginning of last year. It’s been restarted a few times, but she got it going again, and when it started to die out she asked me to take over the following semester. So last spring semester, I restarted it up again.

What are some of your future goals with the club?

I want to do a lot of out on campus visibility stuff. Anything from protests to chalking, I want to get a lot of education out there and we’re working on setting up speaker’s bureaus with some classes. Basically it’s just trying to educate everyone.

What are some things you think people misunderstand about the Trans and gender minority community?

Probably the biggest thing people don’t understand is that there’s not two separate genders, there’s not even just male and female, even if you’re born female and are male, or born male and are female there’s more than that. There’s a-gender, bi-gender, gender fluid, gender neutral, gender queer. There’s a bunch of identities that nobody realizes even exist.

Did you meet a lot of challenges growing up in the LGBTQ community?

Yeah. My family’s very religious and very conservative. Growing up, I didn’t even know that trans and gay people existed outside of movies. The way I like to say is, I thought they were like zombies: They existed and were terrifying but they weren’t real in the real world. And so accepting myself was really hard. I went through a lot of body issues, a lot of depression, it was a big mess until I finally started having friends who were in the community who I could realize, you know, it’s okay to be this way and you can manage this.

Who is one of your favorite icons of the GSM community today?

I have to be kind of stereotypical and say Neil Patrick Harris, just because even though he’s not trans, he is the most accepting person I’ve seen. And he has the frickin’ life I want to lead, though I don’t ever think I’d be a good actor.

What would you like to tell people who are more interested in understanding more about gender minorities?

If you have a question, don’t be scared to ask. I mean, the worst thing you can do is remain uneducated. Even if you think it’s something awkward or you’re scared to ask someone, there will always be someone there to answer questions and if you feel like it’s something you can’t ask, the meetings are open to non-transgendered people, you can come and ask us.

Where do you see yourself in 10 years?

Probably still in school, because I plan on aiming for a doctorate, and I want to be teaching at a college.

What do you think is the biggest issue that the trans community faces today?

Honestly, my close friends Morgan and Kyle have been probably my biggest inspirations in my life.

Domestic and international students mingled over regional appetizers and conversational activities at TRIO’s 2nd Annual Cultural Food Exchange on Thursday. The event, which is…