The 2016 election was a rough one for those both deeply interested in politics and those on the outskirts. It was impossible to go anywhere or talk to just about anyone without the topic of the election coming up. For many people, this led to very argumentative conversations and divisions caused by party affiliations and personal beliefs. To get a better grasp on the effect of this election, students and faculty at #Kent State were interviewed.

The recent election has certainly been a dividing one among families-

Along political lines, has it affected your personal relationships in any way?

KF: My relationship with my family has been the same, because we don’t really let that get in between us, but I did lose some friends online after the election because of obviously different political opinions, and then some nasty comments here and there. So, yeah.

Do you feel threatened by that sort of rhetoric, or talk?

KF: I personally do feel threatened by the rhetoric, just because it is honestly scary. I know that I have a lot of privilege and there are a lot of other people that definitely have a lot more to fear than myself, but I have to admit that it is scary. But I’m not going to let that rule my life anymore, like I’m not going to be afraid and not be myself.

What do you think the future of #LGBTQ rights is going to look like?

KF: First of all, we have to make sure that we’re keeping gay marriage, because we have [Vice President Mike] Pence to deal with. But then continuing on with the fight of getting equal rights for all genders, for everything. Making sure that all health insurance actually does cover all transitional needs and everything else. And then making sure we don’t stop and keep going forward, because once we stop and say, “Oh, we’ve done enough,” then we’re not going to make it. 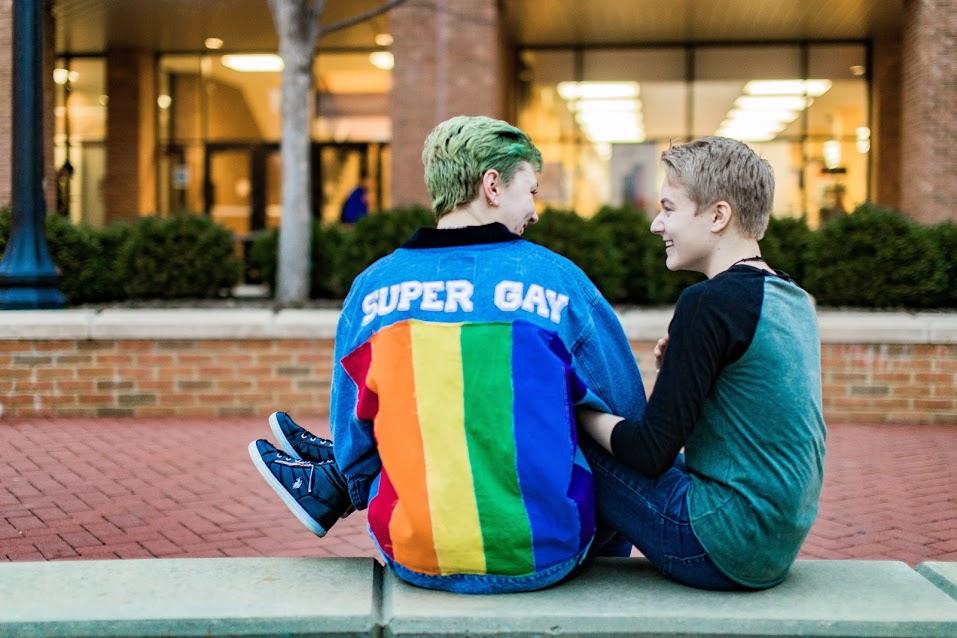 Kat Flood (left) and Riley Braun (right) sit on the grass outside the student center. Photo by Kayla Todd.

How has the election affected your personal relationships? Family, friends?

Riley Braun: I lost a good amount of respect for family members, and also, they are not a fan of my opinions, and me talking about anything political. Because I kind of try to push and say, “this isn’t right” and “this is what is going on here” and how wrong it is or how right it is. So, I don’t think I lost any friends, really, because most of them are pretty gay and liberal. But mostly family members, it was rough. It’s been rough.

Did you already have a strained relationship with these people — not to go too deep — but did it only heighten it, you think?

RB: With the election, it brought out more of what their principles are, and what their morals are, and what they actually think is right. They show a lot of racism, and homophobia, and transphobia, so it just kind of showed it more from what we’re used to, because it’s been talked about more in our family. Because my family, we talk, we talk. It’s like drama. It was already somewhat strained with me being trans and in the community, but they’re more vocal about it. So that’s why it’s strained more, and people, like my family, since they’re very vocal about it, they like to shove their opinions on you, like yell, and aren’t really the best about that.

Do you live on campus, or away from your family?

RB: I live on campus, and I do not enjoy going home. Not a fan. I’m moving out in the summer to Kent, so it’s kind of like, you have me, and Kent State, and then you have them, who you kind of want to push away sometimes, but you know you shouldn’t, but I do.

What do you think the future of LGBTQ rights is going towards?

How has the election affected you, your family, or friends?

Jon Utz: It hasn’t been the best, honestly. My parents – my dad and I – disagree on quite a few things politically.

Have you always disagreed?

Has this only heightened the difficulties?

JU: Absolutely. I tend to avoid the subject of politics with my parents for this reason.

Has this affected your friends in anyway? Or the way that you present yourself, or talk to people?

JU: It has, especially online. I see people tearing each other apart! Not even discourse, just full blown arguments attacking each other. I’m sitting on the sidelines watching this all go down and it’s very concerning.

What do you think the future of LGBT rights is heading?

JU: I think at this point all we can do is hope for the best, and just fight back however we can. Seriously, we’re not just going to sit here and take it.

Ken Ditlevson: So, the day-to-day – really, there is no day-to-day, every day is a little different, it really is one of the perks of the job, because every day is different, there’s a lot of variety. So, we help students feeling safe and supported at Kent State by doing trainings, though some days we’ll do safe space trainings or ally workshops with students, we sometimes work with students who are just needing referrals on what student groups we have on campus that are supportive and inclusive of LGBT. We help students with advocacy if they are running into problems with a roommate or with a faculty member or staff, we can step in and help a student advocate for a change in a roommate or looking at policy change. We sometimes help students with unsupportive families, and we have an emergency fund that we operate through the center for when students are cut off from family support, so sometimes we’re helping students that are in crisis. We have a lot of students that come down just for the social aspect that our center offers, so we have a lounge space that’s connected with the LGBT student center. A lot of students come down just because they want to make friends, or want to get connected – with a potential date, or somebody to hang out with and do things with after class or on the weekend. So, there’s a lot of variety.

How long have you been here?

KD: I’ve been here for a little over two years.

Have you seen any trends lately? I know you can only speak very generally – and I wouldn’t expect you to speak anything but generally. We had a very divisive election that has put a strain on many people, their families, their friendships. I was just wondering if you could speak to that.

KD: We definitely have had a couple trends. The first trend was right after the election the center was really swamped with people just wanting to come and vent, and express concerns. We had a lot of students who were concerned about what protections there would be going forward, just a lot of uncertainty. And a lot of students who were disappointed with the results, and in particular that the president had some stances that were not as inclusive of the LGBT community. A lot of concern of, “is marriage equality going to be taken back? Are there going to be the trans guidance offered by President Obama?” There was speculation if that was going to continue under the current administration. Unfortunately, as of last week, that was dropped. The guidance was dropped. So, there’s still a lot of uncertainty, a lot of people just concerned with what this is going to mean for their own lives or to the lives of the people that are important to them. So, that was the big one. The other trend is that we saw a huge upswing in requests for safe space training.

Collect glow items Friday as you run, walk, or jog the 4th annual Rainbow Run 5k trail. All of the money raised from ticket…