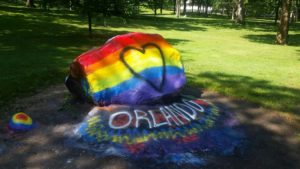 On June 12, the eyes of the world were on the #LGBTQ community which suffered a terrible loss at the hands of a murderer who I refuse to name. That tragedy was the worst for my community in recent memory if not in history. But soon the world will probably forget all about Pulse Nightclub and the 49 heroes we lost.

I remember walking into class on Dec. 14, 2012, opening my iPad and seeing the news about a shooting at Sandy Hook Elementary School in Newtown, Connecticut.  I thought, “This is the worst thing that has ever happened in my lifetime.” It reminded me of the way people talked about 9/11. But, a week later I forgot about it and moved on with my life, just like the rest of the country.

That was a mistake.

I remember where I was when I heard about the shooting in Orlando, Florida. I woke up at 8:00 a.m., and saw tributes on Facebook. Then, I immediately checked CNN on my phone and I burst into tears.

At that moment I made up my mind. I would not let Orlando become the next Newtown or Aurora to me. I will never forget this and I will do everything in my power to ensure that no one ever forgets the names of the heroes turned angels.

June 12 was the first day since I started working at Cedar Point that I truly did not want to go to work. It had nothing to do with my job and everything to do with my mourning. I wanted to mourn the family members I had lost and I couldn’t properly do that while I was working.

I feel guilty for saying I am grateful it wasn’t me.

My first break came at 2:00 p.m. I walked away from my ride, clocked out at 2:05 and at 2:07 I got a text from my father saying, “I suppose you’ve heard about Orlando. Thinking of you and praying for your safety.”

My father texting me the instant I was finally able to receive the message speaks volumes to the connection between parents and their children. It’s almost as if he knew I was on break and I would be able to respond right away.

I am grateful that his texts expressed love and gratitude that I was okay instead of the fear and panic between parents and their children in Orlando.

After my shift I returned to my room and  thought about the day’s events. Now that I finally had time to fully analyze the situation, it truly sank in; my community, my family had been attacked. I thought back to Newtown and Aurora and I cried harder than I ever have before. I knew the country would soon forget about my family and the loss we suffered.

It is almost inevitable: new stories will capture the headlines and the victims in Orlando will be forgotten. After every mass shooting, people remember the name of the shooter(s) and they forget the names of all the victims.

The best way for us to ensure these angels are never forgotten is to continue talking about them as well as fighting for equality with a renewed vigor. Yes, it will be hard and painful. But we must continue talking about them and reminding people what true hatred and evil look like, while fighting to ensure that these heroes did not die in vain. We must continue honoring the angels by saying their names. Let the history books of the future remember names like Luis S. Vielma, Deonka Deidra Drayton and Jean Carlos Mendez Perez, instead of the name of a murderer.

Imagine a homeless man comes to you on the street and asks you for help. Would you simply say, “I am praying that you keep warm and that you find some food,” or would you answer your god’s call to action and physically help the man?

I am willing to bet most of you would physically help the man in an instant even though you don’t know him. The victims in Orlando are the man on the street. Prayers can help but actions will help. The victims need blood donations, they need hate crime laws that protect LGBTQ people and they need real change.

Prayers are important in times like these but prayer and faith must lead to action. Your prayers can be answered in others’ actions, just like your actions can answer others’ prayers.

Action takes many forms after a mass shooting or any tragedy. The most immediate way to act is to donate blood. Donating blood takes roughly an hour of your day. It is relatively quick,painless and it saves lives. One donation of blood has the ability to save three lives.

The horribly ironic issue that came to light this past week is the FDA’s ban on gay men donating blood. Technically the FDA does not ban gay men from donating as long as they have remained celibate for at least a year. This regulation was implemented just last year. However, countless gay men were barred from donating because there is “too much of a risk” for the spread of HIV.

The Human Rights Campaign, Equality Ohio, and the Promise House in Toledo, Ohio are excellent LGBTQ charities that are worthy of your help and donations. A GoFundMe page was set up immediately after the massacre and it has already received over $5 million in donations that directly benefit the victims and their families.

The easiest way you can honor the angels is to perform 49 random acts of kindness over the next 49 days. You can do 49 randomly nice things, expecting nothing in return. Go beyond holding the door open for someone, you probably do that anyway. Buy someone’s groceries then help them carry the bags to the car. Give someone your seat on the bus. Call your grandparents just to catch up. If you notice someone having a bad day, do your best to make it just a little bit better.

Our heroes turned angels should never be forgotten. They should live on in the work we do, in the kindness we exhibit and the love we share.

Rest in power and watch over us