In collaboration with Kent Wired

According to the University of Nebraska Lincoln’s Guide to Gender and Sexuality Terms, a lesbian is defined as “non-men attracted to non-men.” It seems natural that any person who is described by that definition would utilize that term. However, that is not always the case. The term “lesbian” is at the center of many debates, both outside of and within the queer community, leading some people to re-evaluate what it means to be a lesbian and whether they want to use the term as an identifier.

Lauren Montler, a senior speech pathology major at Baldwin Wallace University, has been in a relationship with their girlfriend, Celia Martin, for about a year and a half. They describe that they have experienced “a lot of sexualization from cis, heterosexual men trying to understand what we do in the bedroom,” mostly from people they know, “which stings even more.” This has negatively impacted their relationships with these people.

“I definitely try to distance myself from them more because I know that they’re trying to understand,” they say, “but the internet exists and I’m not here to answer questions about that.”

Instances of sexualization can easily turn from uncomfortable comments to direct danger. The BBC reports that in 2019, Melania Geymonat and Christine Hannigan were on a bus coming home from a date when they were attacked by three teenage boys, who shouted at them to show how lesbian sex works and then physically assaulted them. Geymonat and Hannigan told the press that this incident was part of a larger, systemic issue of homophobia and sexualization

Martin has adopted code-switching to avoid situations in which she might face these systemic problems. “I feel like I’m always kind of changing my behavior regarding being a lesbian kind of depending on the situation I’m in because I’m never quite sure how I’m going to be treated, whether it’s being sexualized by straight men or being ostracized by straight women,” she says. 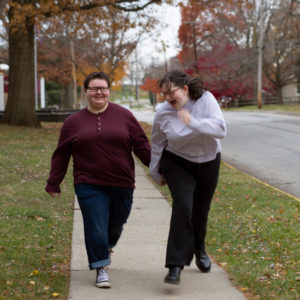 These pressures for lesbians to adhere to certain standards is not just a problem coming from outside of the queer community. Lesbians face a massive gatekeeping problem from other lesbians, whether for their gender identity, past sexual experiences or views on trans people. The Oxford Engish Dictionary defines gatekeeping as “the activity of controlling, and usually limiting, general access to something”—in these cases, the label of lesbian, or lesbian spaces, community or relationships.

For example, not all lesbians use she/her/hers pronouns. This is often written off by exclusionists as a new concept. Admittedly, it is difficult to assign contemporary labels to historical figures, and is considered irresponsible to do so by most historians. Additionally, when historical sources show that more than one set of pronouns is used to refer to an individual, it is often difficult to tell the motivation behind those discrepancies. While they could be ignorant or malicious misgendering, they could also be intentional changes based on the desires of the individual. However, performers Stormé DeLarverie and Maxine Feldman and writer Leslie Feinberg are several figures from the past who had known relationships with women and referred to themselves with or were referred to with a variety of pronouns, including he/him, they/them, she/her and zie/hir.

These lesbians also face the obstacle that pronouns are often seen as directly correlated with gender. However, according to Reimagine Gender, “Although our pronouns are informed by and reflect our gender, pronouns alone can’t tell you someone’s gender. All someone’s pronouns tell you are really that – what pronouns that person uses.” For example, lesbians may identify as women and use they/them, he/him, a combination of pronouns, or neopronouns. The New York Times states that neopronouns can either be “created to serve as pronouns without expressing gender” or noun-self pronouns, “in which a pre-existing word is drafted into use as a pronoun.”

They also may not identify as women at all. Sam Zaborowski, a junior at Kent State double majoring in psychology and neuroscience, describes herself as “gender agnostic,” identifying equally with she/her and they/them pronouns. They know many people who currently or formerly identify as lesbians and under the gender-nonconforming umbrella and finds that being a lesbian has completely changed her ideas about gender.

“Personally, I think so much of gender plays off of the gender roles that we’ve been given and so once you go outside of those roles even a little bit, especially in something that’s so important to gender like a sexual or intimate relationship, it kind of flips your entire worldview of your gender upside down,” Zaborowski says. “I almost view being a lesbian as a different gender because you interact and process things so differently.”

Dr. Lisa Diamond, an associate professor of psychology and gender studies at the University of Utah, has studied this phenomenon extensively, discovering that it is more common in older women. She tells the Guardian, “What we know about adult development suggests that people become more expansive in a number of ways as they get older…I think a lot of women, late in life, when they’re no longer worried about raising the kids, and when they’re looking back on their marriage and how satisfying it is, find an opportunity to take a second look at what they want and feel like.”

Unfortunately, despite the prevalence of this experience, “gold star” lesbians, or lesbians who have never slept with men, are sometimes valued over lesbians who have slept with men. An article from Pride outlines that this term can be utilized to justify many kinds of bigotry and problematic ideology. The idea of placing “a huge amount of value on the virginity of women and girls (virginity meaning, typically, penis-in-vagina hetero sex)” mirrors purity culture that is often found in sexually conservative cultures that encourage abstinence before marriage. It also encourages bi and panphobia, tranpshobia and prejudice against survivors of rape, particularly when “Gold Star” status is wielded by trans exlusionary radical feminists (TERFs) who do not consider trans women to be real lesbians.

Reporter Laurie Penny traces the modern TERF movement back to the early 2010s, when there was an uptick in trans and nonbinary visibility. In tandem with the social media boom, this made many refine their ideas about and language relating to gender, aiming for increased inclusivity. Many, especially establishment liberals, struggled to adjust to the change, and a group of already anti-trans feminists who had been theorists and activists since the 1970s and 80s took advantage of the cultural moment to springboard their ideas into broader acceptance. This ideology, as Penny describes, includes the belief that “if anyone can ‘become’ a woman, then the word ‘woman’ means nothing, and therefore, apparently, trans people are out to destroy the entire concept of womanhood by their very existence.”

While TERFs can be men or women, queer or straight, young lesbians in online spaces are a particular target of the TERF movement. As a part of their recruitment process, TERFs impress upon young lesbians that the issues they face as lesbians and as women, largely perpetuated through patriarchy, are the problems that should be prioritized, and as result, activism and even conversation around other topics is equivalent to silencing lesbians and lesbian concerns. Additionally, TERFs frame backlash against TERF ideology and rhetoric, orientations that overlap with lesbianism (bisexuality, pansexuality, asexuality, etc.), and trans lesbians as an attack on the lesbian community and lesbianism. Some even claim that trans lesbians are “demanding that cis lesbians literally have sex with trans women to prove that they are not prejudiced.”

As Evan Urquhart and Parker Marie Molloy write in an article for Slate, “TERFs are small in number, but they make up for that in visibility (and obnoxiousness). Their existence puts a strain on relations between trans women and cisgender lesbians,” leading non-TERF lesbians to try and distance themselves from TERFs. For example, when the Group Get the L Out, which believes that lesbians should not participate in the LGBTQ+ community “under the false premise that trans equality is holding up cis female liberation,” pushed their way into leading Pride in London’s 2018 march, many cisgender lesbians took to social media to express their opposition to TERFs under the hashtags #LWithTheT and #NotADebate. As one of the organizers of the hashtag, who spoke to them. anonymously for fear of additional backlash from TERFs, said, “Our hashtag has shown that not all lesbians are transphobic, and this small group does not speak for the community, and this has been engaged with by lesbians of all ages.”

“TERFs have set the movement back a long time…lesbianism is and should always be a safe place for trans people,” says Martin. “Lesbians should make a point to invite trans women, whether they’re lesbians or not, into queer spaces and make it known that they are safe.”