On Nov. 20, the sold-out Modista fashion show was about to begin in Rockwell Hall. The stage was decorated simply, with two tapestries on either side of a projector screen depicting heavenly scenes. The screen featured a projection of an angel and a dark angel looking over an erupting volcano.

The crowd of about 200 people went silent as the lights dimmed. Models in handmade designs walked out as guests let out gasps and looked on in awe. The designs featured details such as feathery angel wings, sparkles, sequins and satin materials.

The group wanted a theme that was “approachable, but not done before,” President Evan Neuman told the audience. COVID-19 restrictions prevented the group from holding a show in 2020. The Modista Fashion Group functions as a fashion-focused student organization founded in 2008. The organization is dedicated to unifying and supporting minority fashion students.

The show featured designs from nine Kent State students, all with different interpretations of the Heaven and Hell theme.

Pearl Heinley, a freshman fashion design major, was one of the student designers in the show. She designed looks based off the femme fatale archetype. She competed in fashion shows during high school and wanted to participate in Modista’s show to continue producing a yearly line. It helps her exercise her ideas and see them to completion, Heinley said.

The Femme Fatale is a woman using her sexuality to have power over men, according to Bustle. At the same time, she can be seen as a feminist icon to women because she’s using misogyny in her favor. Heinley designed five outfits based on this archetype. She included leather and satin in red, white and black colors.

She put her first model in black wide-leg leather pants and a short collared top. Shiny rhinestones took the place of buttons on the top, and what looked like a large red tie draped around the collar. A black and red hat sat angled on the side of the model’s head.

Two models walked together with red and white mirrored dress designs. Puffy sleeves covered one arm on the ruffled satin dresses. Rhinestones cascaded across the bodice of each dress.

“I want [my designs] to be remembered … as silly little outfits,” Heinley said. “It’s like a tiny performance of an overblown stereotype of a woman.” 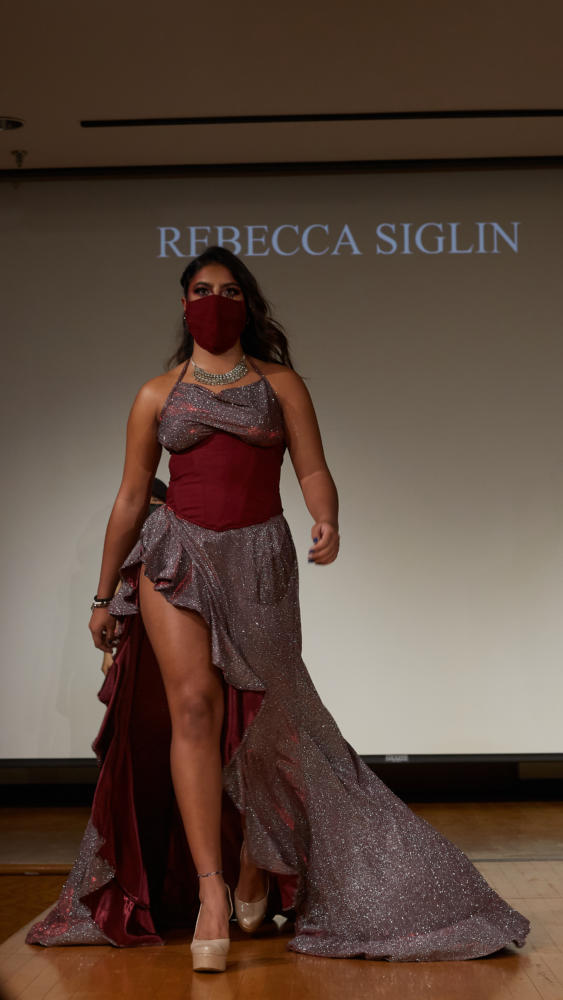 Sullivan, a senior psychology major, is passionate about modeling and working on building up a portfolio, she said.

Sullivan modeled for designer Addie Farrell. She portrayed an angel taking control of her demons. She led another model representing a monster around with a leather leash.

A long, white ruched dress split down Sullivan’s left side, with white fishnet tights and combat boots underneath. The centerpiece of her outfit was large feathery angel wings. Her outfit was covered in splotches of fake blood, a stark contrast from the bright wings.

“It’s a grungy kind of corrupted heaven,” Sullivan said. “I just love playing with stuff like that and seeing what you can come up with.”

Modista’s show was Holcomb’s first runway show. He is a second year music education major, and was excited to cross walking in a runway show off his checklist.

“I have always loved fashion,” Holcomb said. “I have a dream of becoming a model someday.”

Holcomb walked for designer Rebecca Siglin with three other models. Each person represented one of the four horsemen of the apocalypse: Conquest, War, Famine and Death. The four horsemen are symbols of the destruction that will happen during the end of the world in Christianity, according to Learn Religions. Holcomb was the horseman of Conquest.

A religious-themed corset vest covered his torso, with a mask to match. The panels of the vest had gold detailing and were outlined with purple. He wore white pants and heeled boots. A thin gold necklace hung around his neck, and a thin gold bangle wrapped around his left bicep.

“It went really well,” Holcomb said. “It feels great to finally put it out there.”

Written By
Leah Amato
More from Leah Amato
You can glow, get a T-shirt and support the LGBTQ+ Emergency Fund...
Read More