On the same level as the Union Jack and the American flag, the rainbow pride flag has become one of the most recognizable symbols in the world. The pride flag and its symbolism hold great historical and cultural significance. Understanding the flag’s detailed history is essential to fully understanding the importance it symbolizes today.

Gilbert Baker, an openly gay man and drag queen, invented the flag in San Francisco in 1978. Baker felt inspired by Harvey Milk, one of the first openly gay U.S. officals, to create a queer symbol of freedom and pride.

“Because of Gilbert’s tireless advocacy, he did everything from doing the first Gay Games in San Francisco and decorating the stadium with rainbows in the early 1980s to making the nylon flag and 94 pieces of which were then given to contingencies around the globe,” says Charles Beal, a close friend of Baker and president of the Gilbert Baker Foundation.

Beal describes Baker as a passionate advocate and an influential pioneer for the LGBTQ+ community. He says that Baker’s intentions for the rainbow flag perfectly symbolized Milk’s original message of hope and freedom.

According to the Gilbert Baker Foundation website, the first rainbow flag flew on June 28, 1978 during the Gay Freedom Day Parade in San Francisco. The flags for the pride parade were handmade by Baker himself with the help of a few individuals.

However, Baker soon discovered pink fabric was difficult to manufacture and produce, so the flag was limited to seven stripes. As the flag started to fly in 1979, it was modified again when Baker realized it was visually unpleasant having an uneven number of stripes. Additionally, when the flag was hung, some stripes were not visible due to the lamp posts. Eventually, the turquoise stripe was also dropped and the iconic six-striped rainbow flag remained.

Baker developed many variations of the rainbow flag over the years. In 1986, he added a black stripe to the flag to honor victims of the AIDS epidemic. In 1994, the 25-year-anniversary of the Stonewall riots, Baker created the largest variation of the rainbow flag. The flag was a mile long and was recognized by the Guiness Book of World Records as the world’s largest flag. 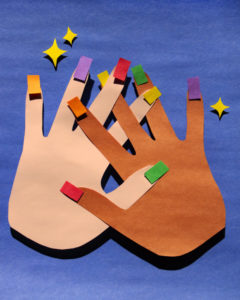 Before the pride flag, other historical symbols for queerness existed in various contexts. For instance, the pink triangle symbol was a prominent predecessor to the pride movement.

According to the History Channel, the pink triangle symbol derived from the Holocaust when Nazis forced homosexuals to wear pink triangles in the concentration camps. Time states that through this dehumanizing process, these individuals were labeled as “the lowest of the low in the camps’ hierarchy.”

“Most of these symbols, including the pride flag and pink triangle, were deeply criminalized throughout history,” says Molly Merryman, a Kent State Peace and Conflict Studies professor. “With the pink triangle’s reclamation, lesbians would actually use the black triangle more often because they were put in the anti-social category in concentration camps, which was symbolized through the black triangle.”

“Since the 1970s and 1980s, the meaning of the flag has definitely changed. As rights have been achieved, the activist side of it is somewhat less prominent,” she states. “Putting up pride flags during Pride Month represents a celebration of a community, not necessarily an activist agenda behind that community. It should be noted, however, that in some parts of the world for the countries still seeking queer rights, it continues to serve as a pure symbol of activism.”

In recent years, the use of the rainbow pride flag has been relatively normalized. Beyond the classic rainbow pride flag, Queer in the World states that over 50 variations of LGBTQ+ flags currently exist. In 2015, the rainbow flag was recognized as an official universal symbol by the Museum of Modern Art.

“The pride flag truly is a national symbol of queerness. And the proof of that is if you go to urban centers that have a large gay population, you will see the pride flag hanging alongside the American flags, existing as a public marker of visibility,” says Barclay Barrios, Florida Atlantic University professor of English.

From an educator’s standpoint, Barrios deeply values the historical significance of the pride flag. He agrees that the pride flag will always be an important symbol but believes it has been slightly commercialized in today’s age.

“The pride flag has shifted from having political representation to having more of a commercial aspect,” he states. “On one hand, we want companies to embrace us, recognize us, and validate us, but there is a lot of criticism that pride itself has been commercialized and these issues have been exploited for profit.”

He emphasizes that the issue regarding the commercialization of pride is extremely complex and it is certainly not a black and white issue. Truly Experiences reported that in 2021, the top companies that participated in pride branding during Pride Month were Apple, Netflix, Disney and Nike. Although some companies may be more ethical than others, this can be harmful because many companies are performative and contribute little profit to the LGBTQ+ community. Despite these factors, the pride flag continues to be a symbol of freedom and hope for LGBTQ+ individuals everywhere.

“The pride flag to me gives me a sense of belonging in a world where I am not always welcome in,” says 20-year-old Ohio resident Colleen Minarach. “If I see it flown or displayed in windows and doors I know I can find acceptance within that space and to me, that is absolutely priceless.” 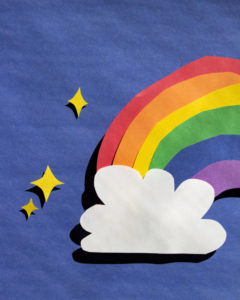 In recent years, the progress flag, a new variation of the pride flag, has gained recognition and popularity among queer individuals. Created by Daniel Quasar in 2018, the progress flag features additional stripes beyond the traditional six-striped rainbow flag. Blue and pink stripes were added to represent transgender individuals and black and brown stripes were added to represent marginalized groups, including communities of color and individuals affected by HIV/AIDS. The stripes are presented in a chevron pattern to symbolize a progressive arrow.

The progress flag has become widely accepted, and some individuals view it as a more inclusive rendition of the flag. However, it should be noted that Baker’s original intent of the flag was to be all inclusive, as the colors of the stripes do not represent individual identities.

Although many variations of the flag have been produced, Baker’s original rainbow design serves as the root of most designs and remains one of the most iconic symbols of queerness.

“In my view the rainbow flag is unfinished, as the movement it represents, an arc that begins well before me,” Baker stated in 2010. “Its breadth is far broader than all of our experiences put together, reaching the farthest corners of the world with a message of solidarity and a beacon of hope for those who follow in our footsteps.”

0 replies on “The History of the Pride Flag Highlighted”