Being Black and queer in modern times confers a lot of weight and responsibility that can sometimes be overwhelming. The mixture of the two cultures and the nuances that come with them give the impression that a person should choose one over the other. This could cause a major identity crisis for someone who falls into a double minority. However, Reegan Saunders and Khiara McCarroll are two examples of the opposite. Saunders is a junior journalism major at Kent State. McCarroll is a Kent State alumna and former Fusion staff member. Together they show that with confidence in oneself, time and effort, the clashing of these two cultures will only aid in the culmination of your identity.

“For the longest time, I separated being Black and being queer. Like, I split them into two identities. But for me now, it’s just one. Growing up in a Black household and in the Black community, I never really had those conversations about what it means to be queer. Since I’ve come out, my family has been super accepting, but back then I was so afraid because I didn’t know how to approach the topic. My family is also quite religious. I was raised as a Christian, but since I’ve started connecting more with myself I realized I don’t believe in God anymore. I think it’s hard to believe in some almighty entity when a lot of the people in the Christian and Catholic community are so anti-gay.

A lot of queer people do not understand my experience, especially cis, white queer people. In class I get misgendered a lot. I have this one class where we each have name tags on our desks, and I wrote my pronouns on mine, and people still use she/her pronouns which can really get to me sometimes. And it’s queer people oftentimes misgendering me.

Being Black, queer and a member of Gen Z is such a unique experience, and there are nuances I don’t think anyone else can understand. And at the end of the day, I look to myself. There is no one who can tell me the best way to express myself. You know, no one else experiences dysphoria in the exact way I do, no one else experiences gender euphoria in the exact way I do. So I think it is up to me to pave the way and hopefully be an inspiration to my peers and to generations to come.”

“I knew I always liked women but it took awhile for me to realize it. In my family, I have gay cousins that have not officially come out since it’s something people don’t really talk about. I did have role models, however. My two cousins being queer women allowed me to look towards them and realize how much of myself I see in them. And that it’s okay that I am different.

“I feel like queer culture differs greatly to straight culture and a lot of that queer culture was founded by Black queer women and Black trans women. Even with that, many non-POC queer people will take inspirations from Black queer culture but then make you feel excluded from them. Especially now since being Black and queer is seen as being cool and trendy, there are still people who say things like, ‘no Blacks,’ ‘no fems,’ etc., so things just get very confusing in that realm.” 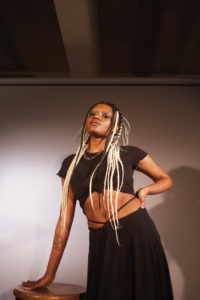 “If I could go back in time and give my younger self advice, I would tell myself to stop worrying about what other people think of you. You’re different no matter what, so embrace that fact and experiment with whatever you want to, whether it be clothes, makeup, etc. Don’t let anything hold you back!”

Although they come from different backgrounds and experiences, both Reegan and Khiara had the same outcome — a love for themselves and their culture. Some days can be better than others, but they understand their identities can be as diverse as a rainbow.

0 replies on “Being Black and Queer”