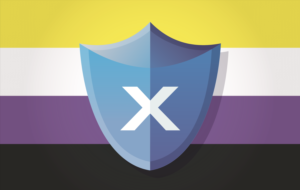 What significance does the letter “X” have? It’s only one of 26 letters, and it’s one of the least frequently used. For Dana Zzyym, an intersex and non-binary individual, as well as countless others from these communities, it is about to mean a whole lot more. The U.S. State Department has announced that individuals who do not identify as male or female will be able to choose to list “X” instead of “M” or “F” on passports. This opens up a new possibility for the queer community and will allow for the better expression of gender through passports.

The State Department, under Secretary of State Antony Blinken, announced in June 2021 that they plan to put a third option under the gender selection portion of the passport application, according to the BBC. Once this policy comes into full effect, you will be able to simply mark “M,” “F” or “X” in the box referencing your gender. The third box for gender selection will be put in place in “early 2022,” according to their website.

Highlighting the importance of this move, Lauren Vachon, professor and coordinator of the LGBTQ Studies program at Kent State, said, “IDs impact everybody. We all have either a passport or a state ID or a driver’s license or multiple documents.” Vachon also emphasized the power of the individual, adding, “lawsuits for civil rights can have enormous impact.”

Simultaneously, the State Department announced a policy that stated individuals no longer have to provide medical documentation to have a gender on their passport different from the one assigned at birth. This policy went into effect at the time of the announcement. Blinken has praised these actions as being “further steps toward ensuring the fair treatment of LGBTQI+ U.S. citizens, regardless of their gender or sex.”

This new gender option on passports highlights just how much civil rights lawsuits can do and how much impact one individual can have. Zzyym sued the State Department in 2015 over the lack of a gender marker that accurately reflects their identity. This resulted in Zzyym getting their passport with an X designation issued to them in October 2021 and opened this option for other intersex, trans and nonbinary individuals.

Explaining the impact that this move can have for the whole queer community, Charlie Coward, a senior psychology major at Kent State, said, “It might be a great opportunity to raise awareness of the intersex community and stop pushing them into certain boxes…I just think that if we can make this one big step as a federal agency, the closer we get towards better legislation, protections and understanding of the trans and intersex communities.”

This lawsuit took six years to resolve and is nearing seven years for full public implementation, but it shows what a single person can do. When your rights are not being respected, you can fight back, you can change that and you can help others while you’re at it. Zzyym explained in an NPR article, “yeah. It just – legal recognition says I am and we are a human being. And we’re not being erased. You know, because for centuries, society has – it had intersex people – are existent which has led to much isolation and suffering.”

DJ Johnson, an intersex freshman Integrated Mathematics Education major at Kent State, portrays how these new options feel by explaining, “I think it’s a wonderful and inclusive option! Traveling can be very stressful, and so I think this option gives anyone who is gender neutral one less thing to worry about!”

Written By
Jake Herbolich
More from Jake Herbolich
Think of a historical figure who has been shunned from history in...
Read More

0 replies on “The Importance of the Letter “X””