The History of Lavender as a Symbol of the LGBTQ+ Community

Lavender is commonly known as a color, pale blue mixed with mauve, and a plant, a small shrub that is part of the mint family, according to the Oxford Dictionary. It is less commonly acknowledged as a significant historical representation of power and resistance. It is unclear if this symbol arose from the herb or the color, but lavender has been used in queer contexts for centuries.

Christine Rai, Assistant Professor of English at Frederick Community College in Maryland, has presented about lavender and humanity for various organizations, including Smithsonian Associates, a part of the Smithsonian. She described the lavender reference saying, “This is pure conjecture on my part but I imagine use of this color may have originated in the LGBTQIA+ community as a way to covertly signal identity in public spaces and from there, spread more widely in society to be used as a symbol to disparage and control people perceived to be ‘degenerate.’”

She then went on to describe how the ancient Greeks were “likely the first in the west to cement it [lavender] as an incredibly useful plant, though it predates recorded history and much of the early information around its origins and uses are apocryphal,” meaning the authenticity is unknown but it is widely believed to be true.

Purple was introduced to Western culture as a “color of desire” in the 7th century because of Sappho who, according to JSTOR Daily, is fabled as the first “woman-loving woman.” Sappho was a Greek lyrical poet from the island of Lesbos whose writing included romantic lines such as “violet tiaras” and “purple blooms” to describe women. This led to traditions in the 1920s of lesbians gifting each other violets as a sign of “sapphic interest.”

As years went by, the queer intention of violets spread to purple in general. Christobel Hastings wrote for CNN that in the late 19th century, fashion was forever altered with the accidental invention of synthetic purple dye. It grew in popularity and soon many people began to wear it. This changed with the rise of Aestheticism, a European art movement that avoided the wholesomeness of the Victorian age and the ugliness of the industrial age. It turned in favor of “beauty, passion and ‘art for art’s sake,’’’ as Hastings wrote. Public opinion began to label Aestheticism as effeminate, which ultimately led to the color lavender to be linked to homosexuality. 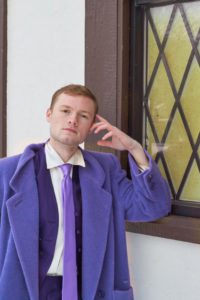 A prominent leader in this movement was Irish writer Oscar Wilde, the author of the novel “The Picture of Dorian Gray,” which was considered scandalous because of its homoerotic themes. He would use the color purple to describe love between men, talking of “purple hours,” meant to represent the time spent with a queer lover as a source of immense joy in an otherwise gray world, as described by Eleanor Medhurst for DressingDykes.

“Though lavender’s meaning and applications have remained largely stable,” Rai says, “its popularity with the general public has waxed and waned, hitting a low point in the west from the post-Victorian era to the beginning of World War One.”

In the early 20th century, lavender held a negative connotation. The phrase “possessing a streak of lavender” was used to criticize homosexual men. According to JSTOR Daily, a notable use of this phrase comes from Carl Sandburg’s 1926 biography on Abraham Lincoln. Sandburg wrote, “a streak of lavender ran through him; he had spots soft as May violets.” This led to queer assumptions about Lincoln that were never proven, but many believe to be true becasue of his relationship with Joshua Fry Speed.

According to the Register of the Kentucky Historical Society, Speed was a politician and close friend of Lincoln’s. They lived together and shared the same bed for four years. Following this, they exchanged letters of their love affairs for a brief period before diverging and having little contact. This association of Lincoln with queerness and the color lavender further built on the stereotype that purple was effeminate and unmasculine.

Throughout the middle to late 20th century, lavender was used by public figures to negatively label people who were part of the community. During the McCarthy era and the Second Red Scare in the 1950s, Senator Everett Dirksen popularized the phrase “lavender lads” to label and stigmatize gay men. During this time, President Eisenhower declared Executive Order 10450 which, according to Hastings for CNN, was state-sanctioned discrimination meant to purge homeosexual employees from the federal goverment and block  any incoming applicants. Over 5,000 employees lost their jobs based on their sexuality. This period was labeled as the “Lavender Scare” by historian David K. Johnson.

The LGBTQ+ community began to reclaim lavender as a sign of power and protest during the late 20th century. Boyce Bivens, a junior printmaking student at Kent State, completed a residency at Zygote Press making prints on the history of flower language and the queer community, including lavender. “I think of lavender as a symbol of power because it goes back so far in queer history,” Bivens says, “It’s an identifier through generations of strength and community and overcoming the parts of society that haven’t been kind to queer people.”

In 1969, just a month after the Stonewall Inn Riots, a march through New York City was held and lavender armbands were worn in a show of “gay power.” In that same year, Betty Friedan, of the National Organization for Women (NOW), denounced lesbian membership and claimed they were a threat to feminism. This led to lesbian members separating and idenitfying themselves as the “Lavender Menace.” They created hand-dyed shirts with the name written across the chest and, according to Hastings, wore them in 1970, when they stormed the stage at the Second Congress to Unite Women and kickstarted a conversation on lesbianism, the very topic Friedan fought to prevent. 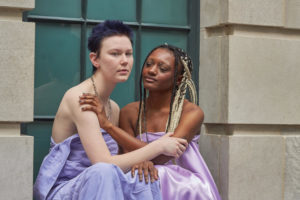 The concept of lavender as a symbol of the queer community continued to gain traction. Bee Reid, who releases art under the name Corey Drew, a graduate student in the jewelry, metals, and enamels program at Kent State describes this, “Lavender has touched all different facets of the community, so it can be used as a radically inclusive symbol.”

In 1974, after the action of the Lavender Menace, the Gay Media Action Advertsing campaign in Boston created the Lavender Rhinoceros. Medhurst wrote that the rhino was chosen to represent the campaign because “it is a much maligned and misunderstood animal.” According to Arielle Gray in an article for WBUR, the campaign was created to run public ads on the Massachusetts Bay Transportation Authority (MBTA) to pull support for Boston’s Pride march that year. Ultimately, they rejected the campaign after an unfair price increase Gay Media Action could not pay. As a response, the lavender rhino debuted at Boston’s Pride as a symbol of protest and resistance. It was done in relation to joy, activism and reclamation. This was seen again in 1978 when Gilbert Baker created the original rainbow flag and included the purple stripe to represent spirit.

Both Reid and Bivens talked about the importance of reclaiming lavender as a symbol for the community. Reid describes, “The queer community has reclaimed so much that has been used against us. Our resilience is in finding power in what was used to hurt us and creating something beautiful out of it.”

“Lavender is able to encompass so many different parts of identities within the queer community,” Bivens agrees. “By reclaiming it we’re taking it as a symbol of power, not one of weakness.”

0 replies on “Loving in Lavender”