How Funky Makeup Has Evolved Into Queer Signaling

To introduce myself, I’m Mandolin. I’m pansexual and non-binary meaning I’m not attracted to any specific gender and I also don’t really identify as any gender either. Makeup, for me, has been something I’ve leaned on since I was twelve, about eight years now. A personal anecdote of my adolescence immediately coming to mind is turning to makeup as an out for my queerness and expressing my internal self, even years ago in highschool. Now it’s evolved into extravagant looks that have unintentionally signalled that I’m a queer individual to people in the community. 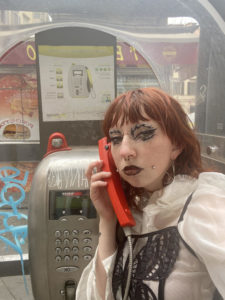 Everytime I get ready in the morning, I’m deliberate with what I wear and corresponding to the ‘lewk.’ Lewk is a term coined by the queer community referring to a face of full glam. Every time I look in the mirror each morning, I’m always trying to one up my previous work and striving for something out-of-the-box. By doing that, it makes me feel more me everytime I walk out of my apartment. I think makeup signaling stems from the extravagance and camp of the 1980’s makeup and ballroom culture. It was also brought back by male influencers like Manny MUA and James Charles in 2016 using makeup to express queerness.

There was an upspike of queer women and nonbinary people who started turning to makeup to express themselves as well. Once people started feeling more safe and accepted socially wearing funky eye makeup, it has grown exponentially. I have noticed that a majority of the current and past makeup trends have been kickstarted mainly by queer people of color. 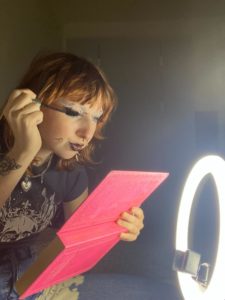 For example, the majority of people who see me on the street are thrown off by the fact that I have no eyebrows, but to me and the queer community it’s quite familiar. It is especially common among Drag performers to have half of their brows or even no brows so you can redraw them on for drag or just not have them at all (and have extra eyelid space).

Along with queer makeup trends, I believe a big culprit to the growth of  funky eye makeup is the heightening use of social media: especially YouTube, Instagram, and TikTok. People getting curated media shown to them allows people in the community to see niche videos of makeup tutorials on how to achieve funky makeup looks. People who watch will then go and try it for themselves. 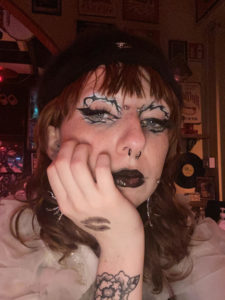 It’s a different way of trends evolving; in the 1950’s and 1960’s, carabiners and hankee code were popular because of word of mouth since social media wasn’t even a mere thought. To show your queerness whilst being quiet about it in a less socially accepting society, these accessories filled that void. Now that queerness is celebrated and society is pivoting, the extravagant and fun makeup is safe to wear out as a daily face.

Funky makeup for me is something I wear everyday to feel genuinely me. Romantically, it isn’t for anyone’s gaze but mine, but I do think that by wearing it out, I find the queer crowd that I want to be friends with and surround myself with. It’s visual storytelling that will bring people in: they want to read the story I tell with the pigments and glitter I adorn daily. As corny as it is to say, I like to think of it as my battle armor I put on in the mirror. When I leave my apartment I feel ready to tackle the day as being genuinely me on the outside, and it matches my bright and funky inside self. I would even go as far as to say it’s self-care to me.

Self care isn’t just giving yourself a bubble bath, but more so paving the way to better yourself and create a better you. It’s absolutely a process I love to tackle every morning or before going out for the night. I sit on my bed, lay out all my tools, put my airpods in and put my music on shuffle. 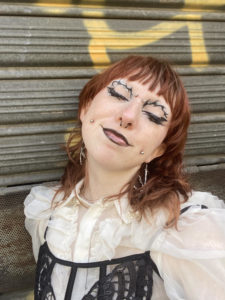 To wrap this up I’d also like to say a thought I’ve been having recently that ties both queerness and makeup together. In my mind, to do makeup successfully (to yourself, not necessarily to other people around you, it’s how you perceive it) you have to be absolutely in touch with your anatomy, your bone structure, your nose, your lids, you. I think queerness and skills with makeup parallel in that you have to be super in touch with your mind. What I mean by that is makeup is physical skill, putting on eyeliner, blending eyeshadow. Whilst queerness or transness is being in touch with your mind so well that you have the realization of “Oh I realized I’m bisexual and genderfluid.”

0 replies on “The New Carabiner”