Since Conway coined the phrase, many journalists, political commentators and others have reacted to the idea of ‘alternative facts’ with satirical humor and dismay. The New York Times is currently running an online advertisement, proclaiming its journalism as “No alternatives. Just facts.” A Columbus pizza shop announced a “zero calories,” meat lovers’ pizza, alongside the hashtag #alternativefacts. But perhaps most frequently—and most chillingly—people describe Conway’s description of falsehoods as Orwellian. 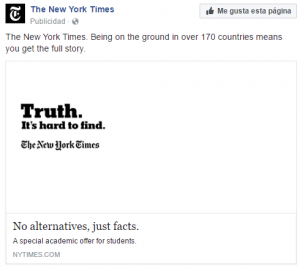 The adjective “Orwellian” refers to author George Orwell’s 1949 dystopian novel, 1984. A central theme in the novel is how political actors can distort language to increase their power and distort the public’s understanding of reality. In the book, the totalitarian government enforces use of the language, Newspeak. Winston Smith, the main character, works for the government, getting rid of old words which the government believes could lead to dissent.

Newspeak and misleading phrases like ‘alternative facts’ influence the public’s perception of reality. When someone hears that a false statement isn’t incorrect but an ‘alternative fact,’ they may start to believe the falsehood. And when people repeat the falsehood over and over, like President Trump’s demonstrably false claim that “massive voter fraud” led to his popular vote defeat, more people may start to believe it.

Since they help determine people’s understandings of the world, language and word choice matter. As a trans person, I feel a deep, personal understanding of how and why they do.

The Liberating Power of Language

In 2012, I finally met another trans person who explained to me what “#transgender” means. Before that, my understanding was highly limited. I didn’t realize I was trans because I didn’t have the language to say so.

Although I went by MJ and wore masculine clothes and short haircuts from ages five to 14, I didn’t realize that transgender was a real thing to be. If I’d heard the word at all, I knew it only as a punchline and later in some vague context of Brandon Teena’s murder in Boys Don’t Cry. Everybody, from my parents, peers, teachers and school administrators, to people on TV and in pop culture, told me I was a girl. Either implicitly or explicitly, they told me that genitals determine and equal gender. Since I didn’t have any other understanding of the issue, I reluctantly tried to accept that idea as fact.

Finding the language to understand that I’m trans freed me from living a life I couldn’t stand. Instead of resignedly calling myself a girl without truly believing it or avoiding the issue of gender as much as possible, I could finally say who I am, in a truthful and accurate way.

Once I learned what transgender actually means and met others who describe themselves that way, I started realizing that I wasn’t a girl and never was. I realized that people aren’t born with genders at all, but they are assigned genders when they’re born, and society enforces gendered expectations onto people throughout their lives. Only after attempting to “be” a girl, (even a masculine one), for most of my life, did I learn: the notion that I’m a girl is an ‘alternative fact,’ or in other, more accurate words, a falsehood.

There are a lot of falsehoods about gender:

To name a few.

Those are all falsehoods, or ‘alternative facts’ about gender. In truth, gender is a part of people’s personalities, and since infants don’t yet have personalities, they don’t yet have genders. Genitals don’t determine gender, for many reasons. People are born with “ambiguous” genitalia. Also, people have “ambiguous” hormone distributions, such as people with Polycystic Ovarian Syndrome or other endocrinological conditions. Bodies change due to illness and injury, so viewing gender as inherently determined by physical attributes is not accurate.

These are also reasons I do not subscribe to the common assertion that “sex” and “gender” are different. What people describe as “biological sex” refers to society’s practice of applying the concept of gender to physical attributes. However, body parts do not inherently have genders. There is no reason people need to view facial hair as “male” and higher-pitched voices as “female.” Plus, since I own my body and its sex characteristics, it is not a female body. I’m male and the body which belongs to me is male, as well.

And of course, gender roles which declare women subservient and inferior to men are simply hogwash.

Language Shapes How We Perceive Others

The ways we talk about gender influence people’s ideas about it. When a local newspaper describes a trans woman as “born male,” rather than reporting the factual statement that she was assigned male at birth, this reinforces the inaccurate and dangerous falsehood that trans people are not our genders.

Sometimes, people, particularly cisgender men, feel so threatened by what they see as trans people “deceiving” them by merely existing, that they lash out violently. This happens most often against trans women of color, who are vulnerable to violence in multiple ways. And the idea that trans people are fundamentally deceitful stems from the idea that we are not our genders.

That’s why language matters. It shapes how people view the world and each other. Misunderstandings happen, of course, and sometimes people react to misinformation in tragic, violent ways. That’s why people need to speak accurately and respectfully, not just about trans people and other marginalized populations, but about other political issues as well. For some it’s easier to ignore or accept genocide if it’s called “ethnic cleansing.” And for some, it’s easier to kill a black trans woman if you see her as a deceitful man or as a life that doesn’t matter, with all the subhuman connotations of the N-word. Respectful, accurate speech, free of falsehoods or euphemistic, propagandist terms for falsehoods, leads to accurate, humane understandings of each other in the world we share.

We Don’t Have Time for ‘Alternative Facts’

Before I came out as trans, with the language to express it clearly, I was miserable. I felt a profound yet nebulous dissatisfaction with life and my place in it. Through alcohol and other dangerous means, I tried to escape the only reality which society presented me: that I was a girl and I couldn’t be anything else.

Today, I know that idea is false. I am male and I have never been female. Today I no longer feel so discontent with life that I want to escape it. Although I’m grateful that I’m able to live as myself now, I wish I could have found the language to understand it sooner. Thankfully, trans visibility and accurate language usage are on the rise. Kids are #coming out as trans earlier, giving them a chance to stay alive and find happiness.

Unfortunately, politically-involved conservative Christians and their representatives, such as Vice President Mike Pence, seek to promote the ‘alternative facts’ about trans people; that we’re not our genders, sinners, dishonest, perverted, etc. Meanwhile, the risk of suicide for trans youth remains extremely high. That’s why I’ll keep speaking about trans people in respectful, factual ways. With an average suicide attempt rate of 41 percent, along with hate-fueled violence against our most vulnerable, trans people do not have time for ‘alternative facts.’