Currently, colleges and universities debate about safer spaces, freedom of expression, and the educational value of competing ideas. How can schools can allow differing opinions while fostering safer education for all? #Kent State University also considers these questions. Students have noticed anti-gay protesters on Kent State’s campus for years.

Political protests are one example of competing ideas. Since May 4, 1970, Kent State University has been famous for protests. Like foreign affairs, LGBT rights are a political issue. But what’s the best response to those who protest against LGBT rights? 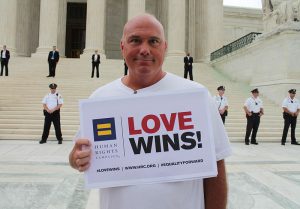 Of course, two men sharing a kiss near anti-gay protesters is one response. And it’s a powerful one. As the marriage equality slogan goes, love wins.

Anti-gay protesters have been around Kent State for years. Corey Grau, a senior, took the kissing photo a few years ago on his way across campus.

“I was standing there taking pictures and those guys came up and were like, ‘Want to get a picture of us kissing?’” Grau said. He gave a “thumbs-up” about the kiss.

Lindsay Wheeler graduated from Kent State with a political science degree. She also shared her thoughts about the protesters.

“I noticed radical Christian folks with angry signs preaching on a megaphone in Rizman Plaza, throwing around words like ‘abomination.’ They had giant posters with awful graphic images that were obviously upsetting a lot of people. There were lots of groups counter-protesting, including other Christian groups apologizing for this hateful group’s words. It was really upsetting. I can’t imagine how upsetting it is for members of the #LGBTQ community. They come several times a year, every year. Awful.”

“I believe they do an anti-choice protest too.” She added.

Because Kent State receives government funding, protests are allowed. Wheeler explains that the anti-gay protesters follow the rules. They do not promote violence. Though “no one is happy about them,” they have the right to express their view.

Also, the term “political tolerance” describes a person’s willingness to give freedoms to people whose opinions differ from their own. Sadly, some people may always oppose equality. But LGBTQ people and straight/cis allies can make sure our voices are heard, too.

After 1960s riots at Cooper’s Donuts and the Stonewall Inn, the modern #LGBTQ rights movement began. Today, the community still defends our rights. We write about LGBTQ issues and send letters to anti-gay legislators. We kiss in front of homophobes or join protests ourselves. There are many ways to say, “We’re here, we’re queer, we demand equal rights!”

Of course, bigoted protesters aren’t the only ones speaking out. Resources, information and events can be found at the LGBTQ Student Center. Pride! Kent, Trans* Fusion, and Threads also engage the LGBTQ community. Off campus, Trans Alive meets in Fairlawn. The LGBTQ Community Center of Greater Cleveland also has resources.

Also, if anti-gay protesters become overwhelming, you can call these crisis lines:

Season 2, Episode 1: “The Devils Are Here”   Last Season on “#Empire”: Lucious was grooming one of his three sons (Andre, Jamal, and…