On Tuesday, #Kent State adjunct professor of English, Amanda Fincham visited local community health center, AxessPointe. While there, she noticed their intake forms had been updated to include demographic questions about #LGBTQ people.

In addition to questions about general identification information, the intake form now offers patients the option of listing their sexual orientation and whether they are #transgender.

Specifically, the form asks, “Do you think of yourself as Bisexual, Lesbian/Gay, Straight, Something Else, Don’t Know or Choose Not to Disclose,” “What Sex were you [assigned] at Birth,” and “What is your Current Gender Identity.”

The form also includes a statement explaining the new questions and clarifying that answering is optional.

“We understand the questions below are new. This information helps provide you with the best quality care. There is an option not to disclose to each of the questions. AxessPointe does not discriminate based on this information,” the statement reads. 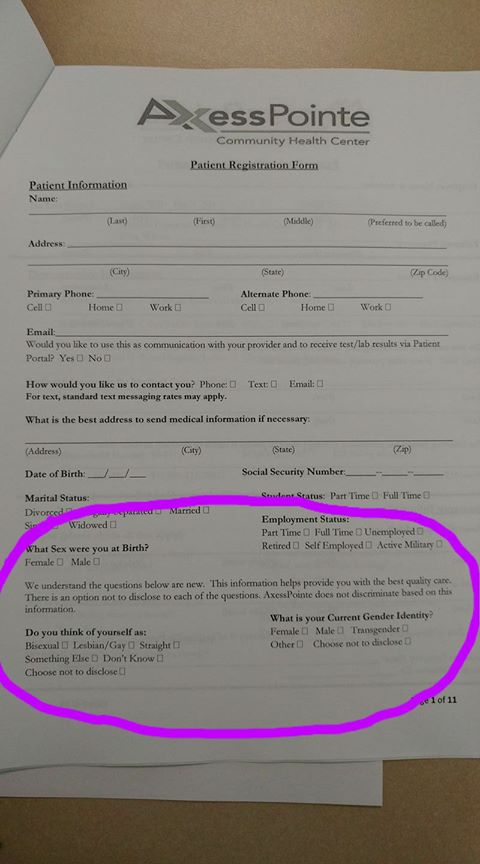 Fincham believes the new options are a positive change.

“The updated version is a good indication that we are moving in the right direction – that being not only on the grand scale of providing competent, compassionate medical care to patients regardless of identity, but also the smaller scales too, such as increasing LGBT visibility and setting a professional/cultural example for the way we should be. Being LGBT is just a small part of who we are as complex beings. This update, I think, could remind people of that.” She said.

“Besides, no matter how small of a step it actually is, it will always be the small steps that make the biggest difference.” She added.

Fincham was so impressed with the health center’s new inclusivity that she decided to commend the staff about it. Later, she shared the conversation on social media.

“As someone who this somewhat applies to/on behalf of those who use it and might not say anything about it, thank you. This is AWESOME, and more offices should include something like this on medical intake forms!” She said.“Thank you! You would be surprised how many people have come up to complain that we even added it to the sheet. They don’t realize that LGBT people often require care that is sensitive to that information, but they don’t seem to care either,” the receptionist replied, according to Fincham.

In her social media post, Fincham elaborated on why the new questions shouldn’t be regarded a problem.

“Being asked (by medical personnel or in general) how you identify does not challenge, negate, or invalidate your “heterosexualness,” your “cisgenderedness,” [sic] or your character. You do that yourself if/when you throw a tantrum about it.” She wrote.

A representative from AxessPointe did not respond for comment in time for publication.

This week, #Glee made me laugh. It made me cry. It made me want to sing. What’s not to love? The smash show continued…