Kids who grew up in the ‘90s were thrilled by Disney’s remake of the 1991 film, Beauty and the Beast. But after director Bill Condon announced that Gaston’s sidekick, LeFou, would be gay, homophobic critics were infuriated.

Franklin Graham, a well-known American evangelist, decried the announcement in a Facebook post, claiming that Disney was attempting to push the “LGBT agenda” onto children. 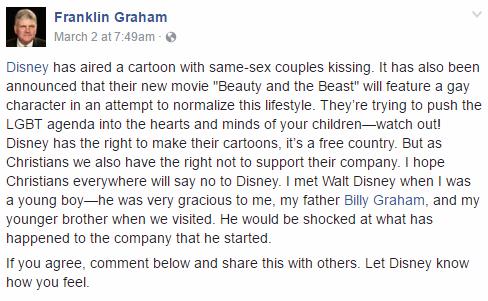 Graham is notable for making controversial statements against #LGBTQ rights, such as praising Vladimir Putin’s extreme anti-LGBTQ “propaganda” law. The law criminalized distributing media to children which describes homosexuality in a neutral or positive way. Graham defended Putin’s decision, claiming that the Russian president believes that “taking advantage of children, exploiting children is wrong for any group.”

Graham isn’t the only person who believes Disney’s inclusive decision somehow harms children. Christian #Entertainment Reviews review of the film states that the mere implication that LeFou is attracted to Gaston, along with a dancing scene between LeFou and another male character, are reasons enough for younger audiences to not watch the movie.

One Million Moms took this viewpoint even further. The organization was created by the American Family Association, which the Southern Poverty Law Center determined to be a hate group. One Million Moms created a petition to spread awareness about Disney’s decision to make LeFou gay. The petition says the film introduces issues of sexual orientation too early. The notion that children should wait longer to learn about orientation is debatable. Many people realized they were gay at a young age and the group appears not to oppose children learning about heterosexuality.

Brook Poston and “This Modest Mom”

Perhaps the film’s most notorious opponent is a blogger named Brook Poston, who runs a blog titled “This Modest Mom.” In a post that gained rapid controversy, Poston shared her disappointment over Disney’s decision to make LeFou gay. She said, as a result, she chose to cancel her family’s upcoming vacation to Disney World.

In a comment to the Huffington Post, Poston revealed death threats and similar remarks directed at her family. While Poston’s views are without a doubt controversial, she and her family did not deserve to receive those personal attacks. Nonetheless, what she shared in her blog post is homophobic and wrong, for a number of reasons.

Her post begins with a disclaimer, warning the reader that her post is based on her conservative Christian beliefs. She writes that though she doesn’t agree with others’ “lifestyle choices,” she loves them anyway. This implies she sees being gay as a choice and nothing else. This seems to be a common belief for many Christians.

Then, I noticed a recurring theme, her disappointment at every inclusive choice made by both Disney and advertisers. She and her family ceased watching numerous shows on ABC, owned by Disney, when the shows showcased explicitly LGBTQ characters. Additionally, Poston stated that every time she sees a commercial featuring an LGBTQ character, she cringes.

Poston’s blog post is in tune with the rest of the critics’ tone. There seems to be a concurrent displeasure with the mere existence of an LGBTQ character in this movie, despite the absence of any romantic or sexual action whatsoever.

Uncomfortable Position as a Gay Christian

This is ridiculous, considering that both Luke Evans, the actor for Gaston, and Ian McKellen, Cogsworth’s actor, are both gay men in real life. Yet to my knowledge, nobody is protesting actual gay men performing roles in this movie.

For me, learning about the absurd amount of backlash Beauty and the Beast has faced is uncomfortable enough, since I’m gay. And as a gay Christian, it’s incredibly frustrating to see other Christians equate my orientation to something atrocious.

For example, a comment on Poston’s blog initially seemed to lovingly reprove the author, explaining that she was pushing people away from God with her words. But just as I was going to cheer, I read the following:

“I refuse to believe that homosexualism should be seen differently than, say a pathological liar, an obese person gorging themselves, someone gossiping, a prostitute etc etc etc. anyone with sin.”

I could write plenty of articles on the oh-so grand debate on whether or not we LGBTQ individuals are somehow sinful, but this isn’t the time. But for goodness’ sake, equating us with liars and gossips, just for being gay? Bye, Felicia.

People have blown this whole LeFou thing absolutely out of proportion. He doesn’t even kiss a guy in the movie, much less partake in sex. Just having an openly gay character in the film was enough to disgust the critics.

I hate to be the gay boy to burst this bubble, but sorry (not sorry), LGBTQ people are quite real. Trying to hide us from media and denying our existence won’t ever change that.

I’m sick of other Christians pushing people like me away from God, with their gross obsession with our lives, and claiming our goal for peace is an agenda to “convert children.” What a joke.

They wonder why some LGBTQ people despise Christians, while ignoring the fact that they despise us first. Whether it’s open personal attacks, or more subtly, like the petition from One Million Moms, it’s the same. I long for the day when my fellow Christians work collectively to help end the horrors that LGBTQ individuals face, rather than bemoaning our appearances in popular media.

#The New Normal approached the hot button issue we were all waiting for: #gay marriage. With two unmarried gay men planning a family, the theme…