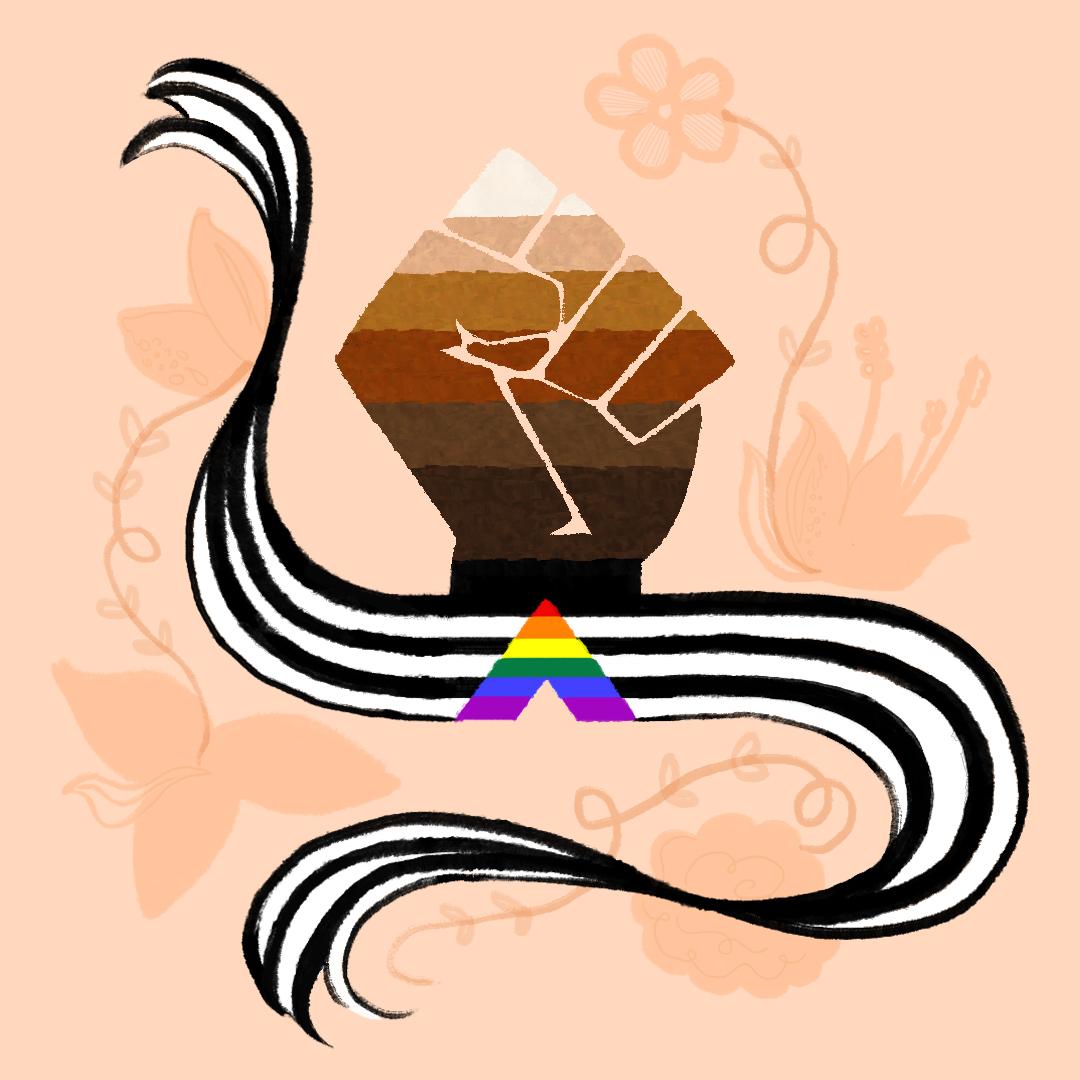 In the relentless year of 2020, we find ourselves in a state of reckoning with the long history of racism in the United States. Propelled by many disheartening inequalities that continue to exist and the unjustified deaths of George Floyd, Breonna Taylor, Ahmaud Arbery and more, the Black Lives Matter movement has gained significant momentum as more people wake up to the reality of how far we still need to go to dismantle systemic racism. Pride Month, which is celebrated in June, looked very different this year, and its convergence with Black Lives Matter protests and activism remind us that discrimination is intersectional. Intersectionality is the theory that the overlap of various social identities, such as race, gender, sexuality and class, contributes to the specific type of systemic oppression and discrimination experienced by an individual. #LGBTQ+ people of color have intersecting identities which lead them to be dually marginalized in society.

The work of LGBTQ+ allies must embody this intersectionality.

Forty-two percent of LGBTQ+ adults in the U.S. identify as people of color, according to the Williams Institute at UCLA, including 12% identifying as Black and 21% identifying as Latinx. However, LGBTQ+ people of color are underrepresented in many areas – including media, employment and government – and have been particularly disadvantaged throughout U.S. history. The role of an ally is centered around bringing attention to these issues and amplifying the voices of those who too often go unseen. More than being a friend and supporter, being an ally means using one’s privilege to stand up for the rights of people who have never had that privilege. Coming to terms with your own privilege or unpacking any biases you may have is a crucial first step in taking action, and this reflective process will help solidify your intentions.

Education and awareness are also a necessary foundation for allyship. This may sound obvious, but it involves putting real effort into research and learning. Melanie McFarland, a Black journalist for Salon, says, “Right now there are a lot of white people diving into what should be required reading about systemic racism in America … Many of the people who purchased these books know they’ll look great on their shelves, or plan to read them simply so they can say they did. … Point being, if you’re going to do the reading, do the work that comes with it afterward.”

McFarland calls this “virtue signaling,” in which people feel proud because they’ve created an image of themselves as an ally. Truly engaging with newfound knowledge and following through to make it valuable in your actions is what actually constitutes allyship. For white LGBTQ+ allies, knowledge of not only systemic racism but also the unique experiences of LGBTQ+ people of color is essential.

Online resources such as the Movement Advancement Project and the U.S. Transgender Survey provide reports on the disparities that LGBTQ+ people of color face. MAP is a source of many reports and statistics regarding the LGBTQ+ community, and their 2016 report, “Unjust: How the Broken Criminal Justice System Fails LGBT People of Color”, is highly relevant. The specific groups studied included Black, Latinx and Native American respondents. The purpose of this report was to examine “how racism and anti-LGBT discrimination combine to make LGBT people of color uniquely vulnerable to entering the criminal justice system and also facing unfair and abusive treatment once they are in it.”

USTS also provides many reports, specifically surveying the experiences of transgender people of color. Their 2015 U.S. Transgender Survey gathered data about the experiences of 796 Black respondents, 1,473 Latinx or Hispanic respondents, 319 American Indian or Alaska Native respondents, and 783 Asian, Native Hawaiian or Pacific Islander respondents. These surveys found that unemployment rates range from 2 to 5 times higher than the rates among cisgender members of each of these groups within the U.S. population. Between 21% and 57% of respondents in each report have experienced homelessness at some point in their lives, and 11% to 22% experienced homelessness because of being transgender. Sixty-seven percent of Black respondents said they would feel somewhat or very uncomfortable asking the police for help, compared to 57% of respondents in the USTS sample overall, which is a testimony to the corrupt criminal justice system’s fixation on Black individuals.

The discrimination that LGBTQ+ people of color experience and the resources they have to combat it are compounded by their intersecting identities. This must be a core focus for LGBTQ+ allies now more than ever, and there are certain things to consider when pursuing this role.

LGBTQ+ equality and racial justice have had a very similar journey and are intertwined in many ways, therefore it should be nothing less than expected for LGBTQ+ allies to also be in support of the Black Lives Matter movement. When it comes to learning more about this, McFarland emphasizes the importance of not placing “the burden of your racial awareness education on your Black friends.”

Black members of the LGBTQ+ community, and the broader community of all people of color, are already burdened by societal pressures and acts of injustice. They are very likely experiencing more distress than the feelings of helplessness or overwhelm that you might be dealing with in these troubled times. As McFarland explains, “When we’re feeling helpless, it seems natural to turn to a trusted confidante who has a personal, visceral experience with racism to get some answers. But that is precisely why you shouldn’t do that.”

Having meaningful and cathartic conversations is always important, but there is a difference between reaching out to someone to support them versus doing so only in search of information. Conversation lends itself to empathy, and while this is wonderful for increasing your understanding as an ally, remember to tread carefully in conversations and ask permission before discussing anything very serious or potentially unsettling.

Intervention and handling your own mistakes are two other crucial aspects of being an ally to LGBTQ+ people of color. Many people who consider themselves allies remain silent even in situations where speaking up matters most. Silence is not a neutral position to take as an ally, and it is important to intervene whether or not the person or group being discriminated against is present. While allies should be corrective of discrimination they encounter, it is unrealistic to assume that you will make no mistakes. Humans make mistakes, even when we have the best intentions. Make the effort to recognize you made a mistake, apologize and pledge that you will be more intentional with how you operate in certain situations.

Finally, don’t let your attention to racial justice as an LGBTQ+ ally fall away like a passing trend. The fight isn’t over, and being an ally means staying engaged and seeing it through. Continue to educate yourself as time goes on. There is comprehensive data available if you further explore the MAP and USTS reports, and sources such as this MD Edge article and this NPR article offer insightful perspective on the experiences of LGBTQ+ people of color. This information is very useful for enhancing awareness and understanding. Furthermore, for those who are able, there are many organizations you can donate to as a meaningful way to support their missions and advocacy to the Black LGBTQ+ community.

The complex and unique experiences of LGBTQ+ people of color are not talked about enough and this must change in order to cultivate a different future for the next generation – one that is less marked by losses and inequalities.