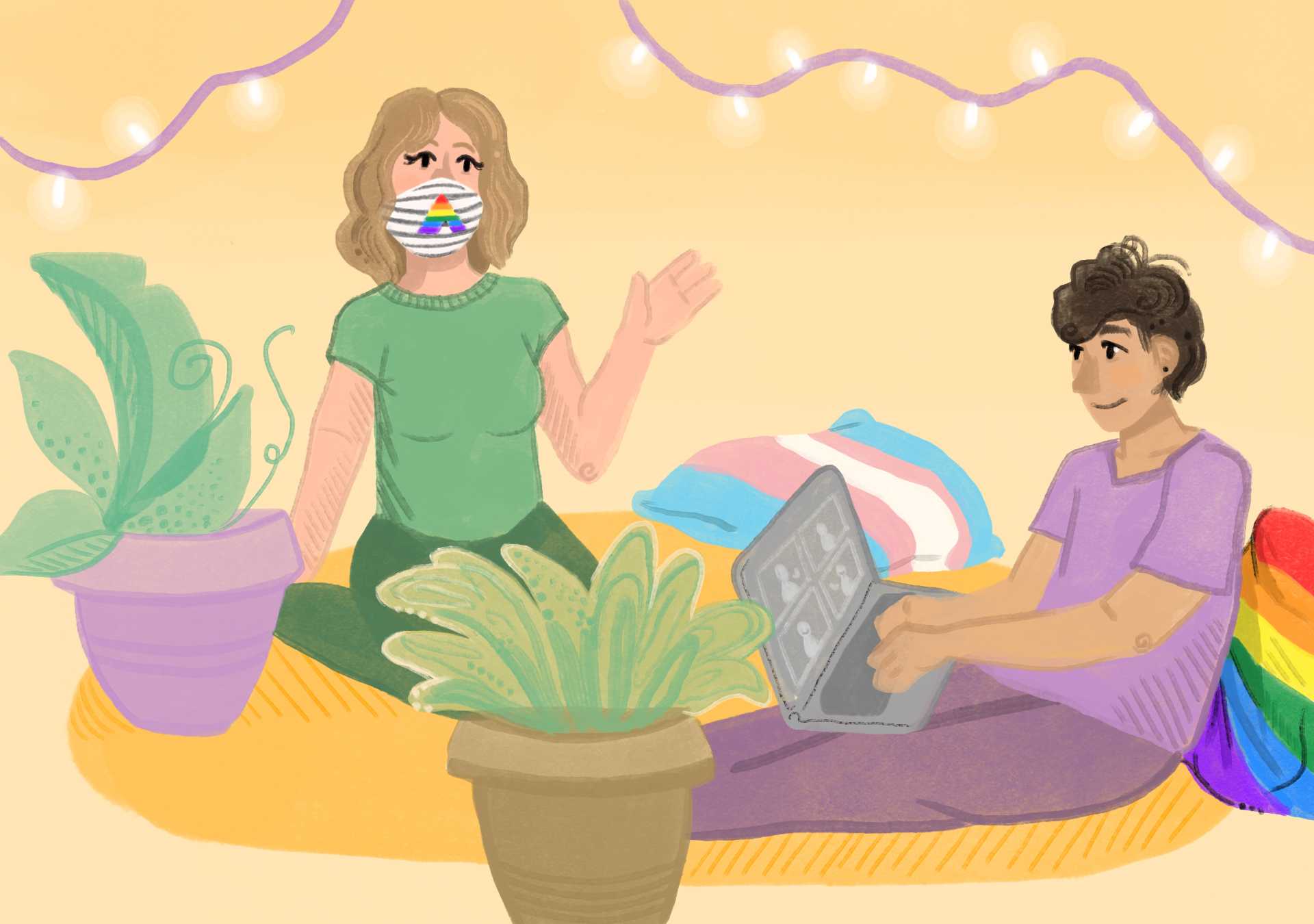 The #COVID-19 pandemic has confronted everyone with unexpected challenges. We have all experienced individualized impacts and accompanying feelings that are often difficult to deal with. The repercussions have rippled throughout many aspects of our personal and professional lives, and these unfamiliar circumstances will leave a mark on future generations.

Systematically underprivileged groups such as the #LGBTQ+ community have unique sets of challenges associated with this ongoing situation. While LGBTQ+ people are not inherently more likely to contract COVID-19 than other groups, there are several factors that put them at increased risk and make them more vulnerable to the social, economic and mental health impacts of the pandemic. For LGBTQ+ allies, being aware of the additional struggles individuals within the community face is conducive to being a helpful source of support during this time.

The virus does not discriminate; however, this does not mean we should ignore the specific inequalities and vulnerabilities that do exist for the LGBTQ+ community. There are several factors which may result in individuals within the community being more susceptible to infection than the general population. The LGBT Foundation summarizes this concept clearly in a recent report: “The impact of the virus is widespread, however individuals from marginalised or disadvantaged groups who already experience poorer outcomes in healthcare are often disproportionately affected by the wider healthcare implications of the current situation.”

The LGBT Foundation also highlights specific factors that put the LGBTQ+ community at increased risk. Firstly, LGBTQ+ individuals are more likely to be living with HIV, which attacks a specific type of immune cell known as the CD4 helper cell and weakens the body’s ability to fight off infections. Those living with HIV who do not know their status or are not accessing proper treatment are of particular concern, as a compromised immune system is more susceptible to the symptoms of COVID-19.

LGBTQ+ individuals are also more likely to smoke: 18.8% of heterosexual people smoke, compared to 27.9% of lesbian women, 30.5% of bisexual women, 23.2% of gay men and 26.1% of bisexual men, according to the LGBT Foundation Issue Brief. Smoking is correlated with increased risk of coronavirus pneumonia, and sharing cigarettes, which is something that is particularly common among the most disadvantaged smokers, LGBTQ+ people included, is a way in which the virus spreads.

Additionally, LGBTQ+ people are more likely to be homeless or insecurely housed, and many people in such living conditions may be unable to self-isolate properly or may not have what they need if they do fall ill. Many homeless and housing-insecure people also face barriers to accessing primary care without a fixed address. Another one of the most significant issues is that LGBTQ+ people may be more reluctant to access healthcare due to fears of encountering LGBTQphobia, which could result in people with COVID-19 symptoms avoiding medical advice or care once these symptoms develop. A survey referenced in the LGBT Foundation’s report found that “14% of LGBT people have avoided treatment for fear of discrimination because they are LGBT. This rises to 37% of trans people and 33% of non-binary people.”

The impacts that come with the safety measures put in place to combat the spread of the virus are also ever present. There is no denying that practicing preventative measures is necessary at this time, but we now see what we must sacrifice to do so. In many cases, the demanding nature of these adjustments is amplified for the LGBTQ+ community. The consequences of physical distancing, for example, separate people from their support networks and connections within the community are severed. The Trevor Project explains that what often accompanies this is a decrease in positive social interactions and an increase in negative ones, stating that “an unintended consequence of physical distancing is potential loss of the social connections that protect LGBTQ youth from suicidality.”

The emphasis on youth here is something important to consider, as young LGBTQ+ individuals may still be working through their identities and seeking validation within the community. This stage in their lives is a tough time to be isolated and lacking social support. Lack of face-to-face support may also worsen the already higher rates of anxiety and depression in LGBTQ+ people and, as reported by the LGBT Foundation, “poor mental health has been linked (to) other behaviours detrimental to overall health including extended use of substances, self-harm, eating disorders and suicide ideation.” Behaviors such as these are often exacerbated in conditions in which normal routines are disrupted.

An example of increased negative interactions resulting from social isolation is the possibility of being confined in an environment that may be unsupportive or abusive.

“Based on existing research on rates of family rejection,” states The Trevor Project, “many youth will spend their days confined to places that are unsupportive of their sexual orientation and/or gender identity for an indefinite amount of time.”

Additionally, LGBTQ+ individuals are more likely to experience domestic abuse; therefore, social isolation means that many are trapped inside with abusive partners or family members. The LGBT Foundation reveals that since the safety measures came into effect, they have seen a 30% increase in domestic violence calls to their helpline.

Lack of employment, income or savings is a major contributing factor to the possibility of being isolated in an unsupportive environment, as this is a primary reason many people have little option but to move back in with parents or family who are LGBTQphobic or otherwise unaccepting of their identity. Similarly to how healthcare concerns for the LGBTQ+ community are heightened, economic strain and unemployment concerns are worsened by the current social climate. Because employment inequalities already exist for the LGBTQ+ community, according to the Movement Advancement Project, there is even more apprehension when employment becomes inconsistent and uncertain for the whole of society.

Regarding transgender and nonbinary individuals specifically, Dr. Katherine Nguyen Williams of Psychology Today reports certain worries that she sees in her own clients. One recurring concern that she observed was the impact of decreased access to medical assistance and postponement on gender-related appointments or procedures. Emergency measures have put practices deemed as unnecessary on hold, often including services such as electrolysis and hormone injections, which can considerably alleviate feelings of anxiety and gender dysphoria. Williams shares the conflicting emotions that occur with a sudden change of plans: “Some of my transgender clients have also expressed an understanding, but natural disappointment due to the delays in medical appointments and surgeries to help with symptoms of gender dysphoria. Some clients have waited years for these procedures; one client described it as ‘heartbreaking’ that she is unable to get bottom surgery.”

Williams also describes another impact felt by trans and nonbinary individuals – the “competing anxieties” they feel which causes them to question the validity of their gender-related fears and worries. In situations where they are living with people who misgender them or use deadnames, they question whether it is still fair for them to worry about their gender identity and ask people in their lives to use the right pronouns and names during a pandemic. The wavering fear between their own personal struggles and the way the pandemic impacts everyone around them can cause further mental turmoil and uncertainty about the future of their identity and self-acceptance.

“It is a truism that crisis amplifies existing inequalities — the social and economic hierarchies that pre-date the pandemic are reproduced within it,” says Graeme Reid of Human Rights Watch (HRW), which is an organization dedicated to fighting human rights abuses. Reid is the director of HRW’s LGBT Rights Program, and he researched the ways LGBTQ+ people around the world are more vulnerable to the pandemic “especially where their status intersects with poverty.” Examples of regions he discusses include Panama, South Korea and South Africa, all of which lack public support for LGBTQ+ individuals regarding COVID-19.

As Reid explains, “Transgender Panamanians found themselves between a rock and a hard place during gender-based quarantines when neither their identity documents nor their expressed identities protected them from abuse. They were forced to rely on courier services for supplies — a luxury they could ill-afford. … In South Korea, scapegoating on the heels of media reports about an infected person who went to gay clubs amplified fears of familial rejection as well as the threat of employment discrimination and other economic repercussions in the public sphere. … And in South Africa, LGBTQ migrants from the continent live extremely precarious lives, compounded by COVID-19. They lack community support networks due to homophobia, and have no access to the government-issued emergency supplies available to needy South Africans during the lockdown.”

While experiences during these unprecedented times are highly individualized among different countries and communities, expanding our awareness beyond that of what occurs in the United States is important for enhancing our perspectives, which in turn makes us more understanding and empathetic.

As an #ally, educating yourself is the first step to being an insightful and helpful influence in someone’s life. LGBTQ+ individuals you know could be contending with a very specific set of challenges. Be aware of these possible experiences and what community support and health resources are still available; discuss these resources with any friends, family members, peers or others who might be struggling. For Ohio-specific updates on LGBTQ+ legislation during the pandemic, Equality Ohio’s COVID-19 LGBTQ Ohio Info Center is available. Virtual support resources for the LGBTQ+ community include, but aren’t limited to, The Trevor Project, Trans Lifeline, the LGBT National Help Center and Gender Spectrum, which is also a source for allies to educate themselves.

Even if you are unable to connect in person, continue to make the effort to reach out and provide support however you can. Affirming that you are someone people can trust and confide in can provide a sense of comfort and security for someone who is lacking an immediate support system. Especially considering the current limits to human connection, conversation is an imperative part of ensuring your intentions are clear and that you are able to understand how it is that you can provide support for a particular person. Psychology Today discusses examples of the kinds of dialogue allies can initiate, and one piece of advice is to “ask open-ended questions such as, ‘I’m so sorry to hear that you are feeling this way. What can I do to support you during this time?’”

Asking what they are specifically looking for from an ally is a great way to approach potentially difficult conversations. The following are a few more useful ideas from Williams:

In addition to these helpful prompts, try to relate with them about your own fears and share anything you’re doing to help you navigate feelings of discomfort and uncertainty. Most importantly, make it clear that you want to do whatever makes them more comfortable even if that means you have to make your own adjustments to what you’re used to. Prioritize what is helpful over what is easy or familiar to you – whether it’s a situation of learning to understand their sexuality, gender or both, honest conversations are always a pivotal part of this process.

An essential part of being an ally to the LGBTQ+ community is understanding the individuals you wish to support as well as why the role of an ally is so important. Life-long learning is necessary, and right now, this includes educating yourself on the ways the COVID-19 pandemic impinges on the lives of those within the LGBTQ+ community, and specifically how much more difficult it can be for individuals to seek out support. Considering how limited and isolated many people are feeling, it’s possible to say that some have never needed a trusted ally more than they do now.

Currently, colleges and universities debate about safer spaces, freedom of expression, and the educational value of competing ideas. How can schools can allow differing opinions…