In the last twenty years or so this country has seen a major shift in the way we view sexuality. Gays and lesbians are steadily gaining the right to marry their #same-sex partners. Anti-gay behavior and discriminatory speech is becoming less tolerated, and in some situations, grounds for termination in the work place. The fight for same-sex monogamy has leaders from even the conservative right cheering for marriage equality –though they’re still few and far between. 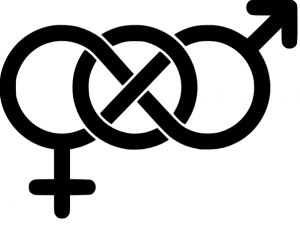 Interlaced male and female identifiers, a common symbol for #bisexuality.

In a culture where we view life as a #binary code—man/woman, gay/straight, black/white, etc. where does bisexuality or gender non-conformism fit? After reading a study done on bisexuality and its influence on the LGBT movement and the heterosexual culture, I began wondering how bisexuals (and even those who identify as #pansexual) see themselves in “the love triangle,” if you will.

Kristen Esterberg poses this series of questions in her 2011 study “Shaking up social categories is hard to do” surrounding bisexual romance:

“If we define bisexuality as simply behavior—sexual desire or activity with both men and women—then we miss something important. Is a lesbian who occasionally sleeps with men ‘really’ bisexual even if she continues to think of herself as a lesbian? Is a married man who occasionally fucks men really bisexual, even if he thinks of himself as straight? What about a gay man and a lesbian who have sex with each other on occasion? Is theirs simply queer sex? Bisexual sex? Straight sex?”

It seems the possibilities surrounding sexual desire or #identity are endless these days, but our culture has a hard time viewing sexuality as simply a behavior, rather than a biological desire. Some (both hetero and homo) believe that bisexuality and other gender non-conforming sexual behaviors or identities threaten the very fabric of the gay and lesbian movement, because it advocates sexual desire as a choice. Ever heard someone say it’s just the road to gay town? Others believe that it’s bringing our culture closer to free gender expression and away from a set of societal ideals that only limit our sexual desires and needs as human beings.  And then there are those who think that we’re all, to some degree, bisexual in nature.

What do YOU think? Is our binary viewpoint distracting or promoting a non-conforming sexual identity? Do you even think our culture is as binary as experts suggest? And regardless of your sexual identity or practices, what’s your take on Esterberg’s questions?

Go for it in the comments section!