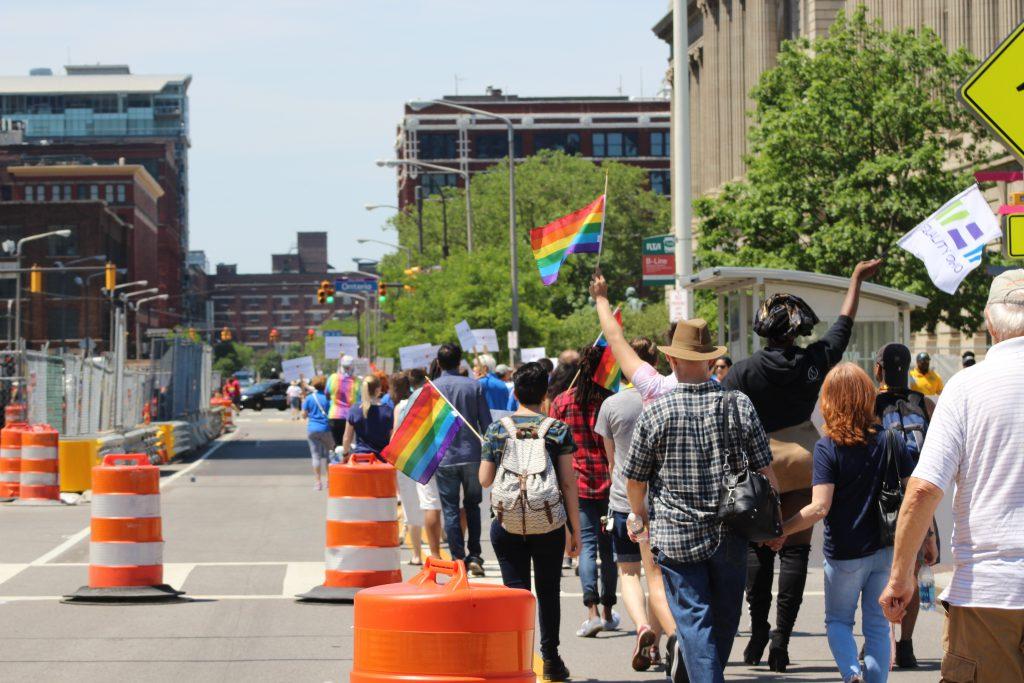 Supporters marching down the street chanting. Photo by Anu Sharma. 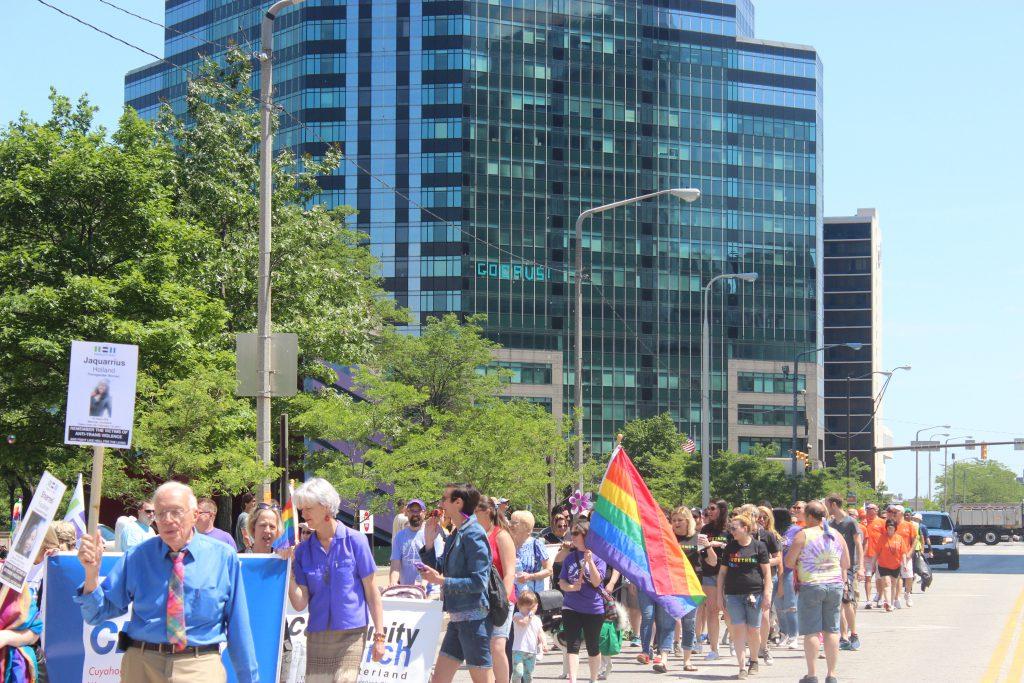 The parade, which took place on June 3, started at the corner of East 6th Street and Lakeside Avenue. Marchers gathered in front of the Free Stamp as they waited for the parade to start. The march concluded at the newly renovated Public Square. 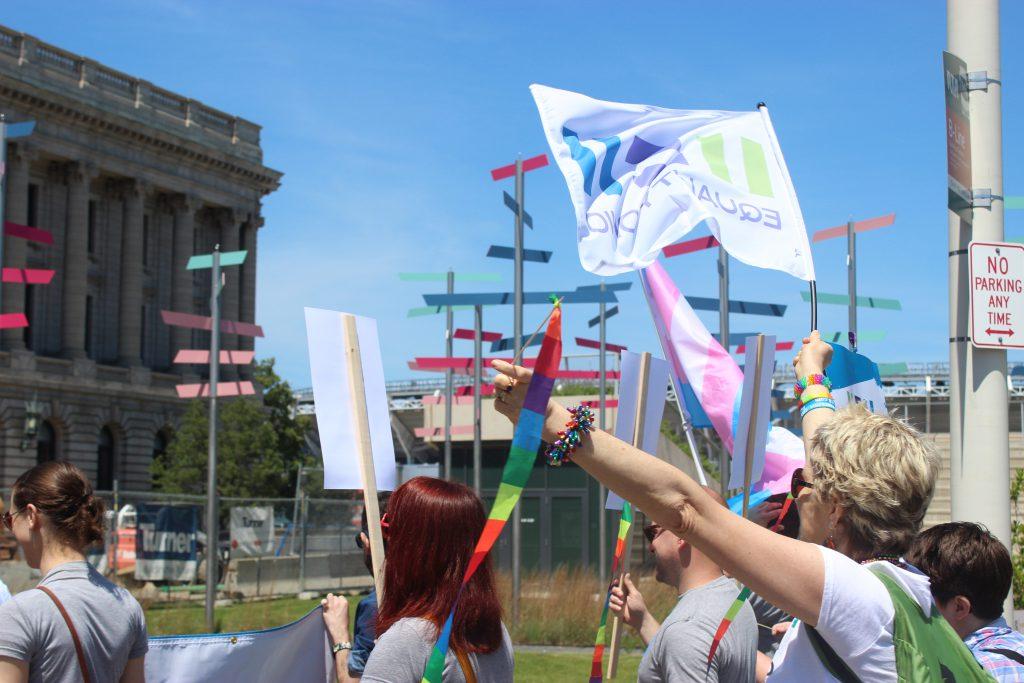 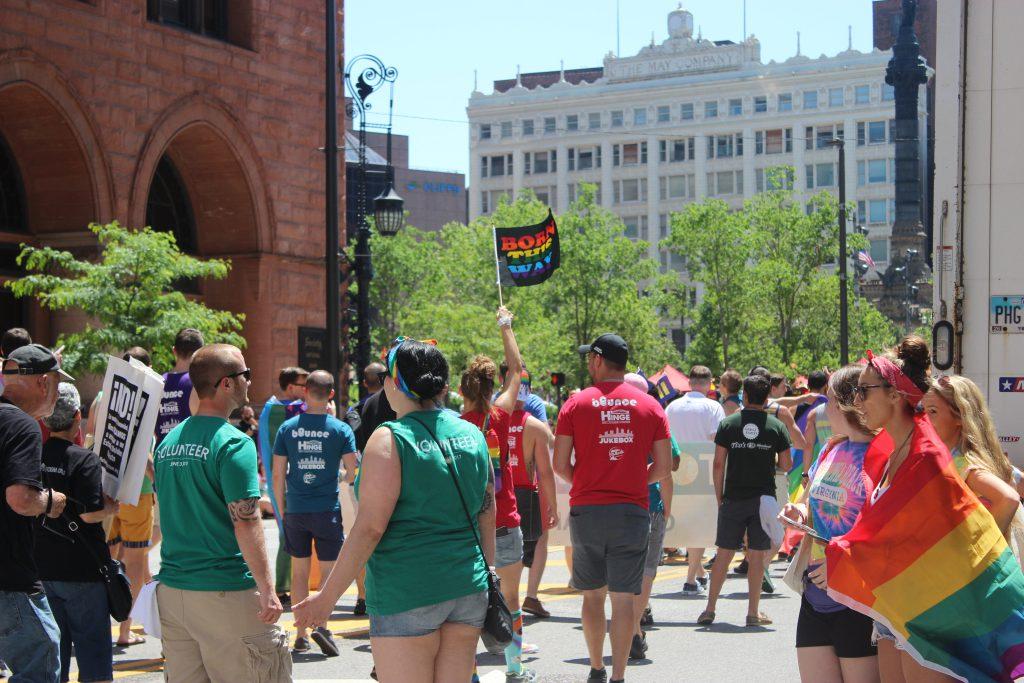 On the square, tents were set up for selling merchandise and organizations like Equality Ohio and #Human Rights Campaign gave attendants an opportunity to sign up for activism opportunities. Members of the local Food Not Bombs, an anti-hunger and anti-war collective, provided free snacks. 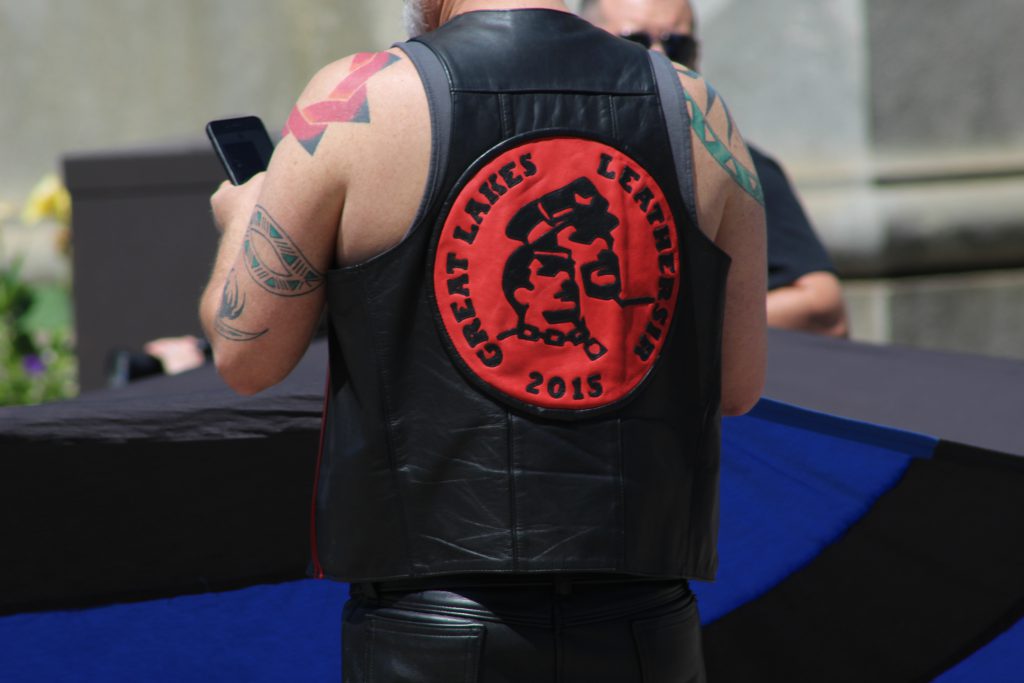 A member of Leather Pride. Photo by Anu Sharma. 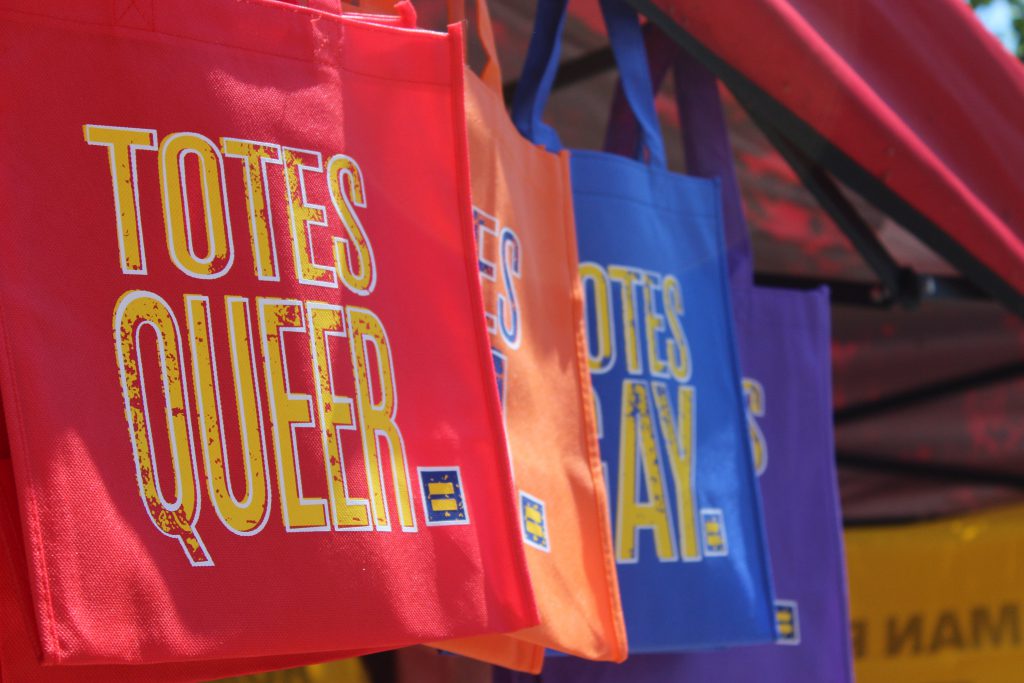 The Human Rights Campaign sells tote bags at the event. The bags read slogans such as “totes queer” and “totes gay.” Photo by Ella Abbott. 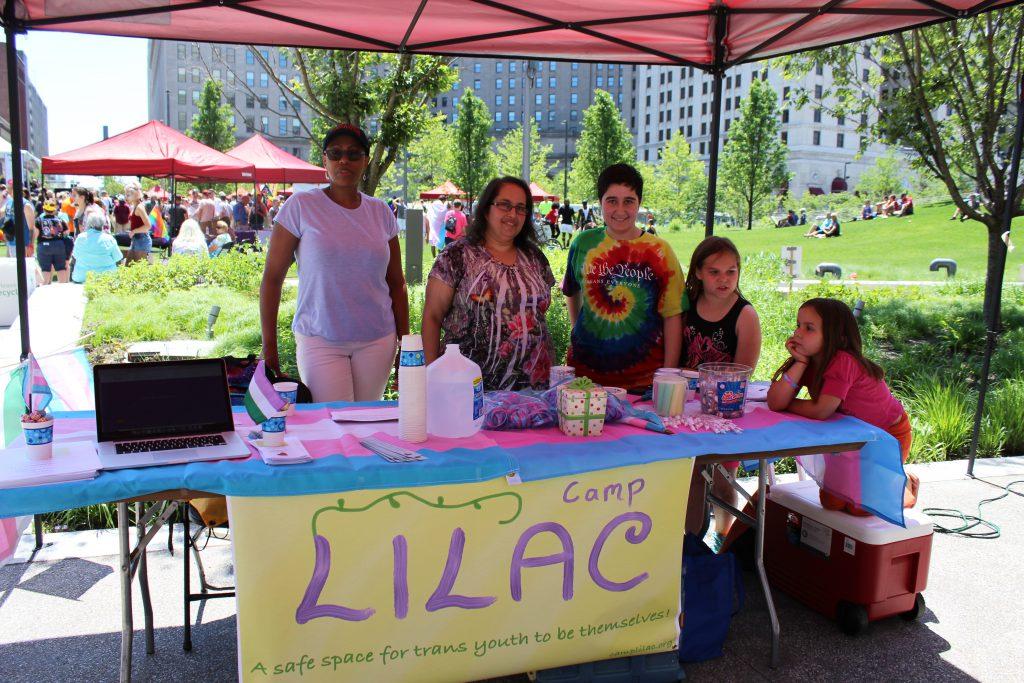 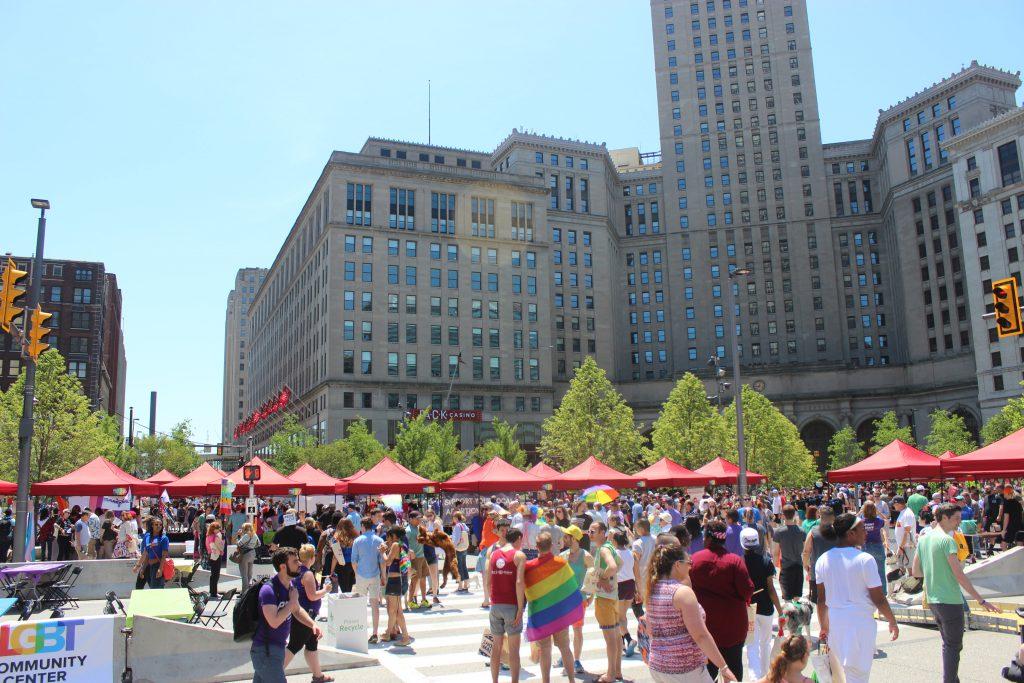 Tents cover the square in front of Tower City. Photo by Ella Abbott

At a large stage in the center of the square, musical acts performed throughout the day and local politicians took to the stage to speak about the necessity for equality within the city. 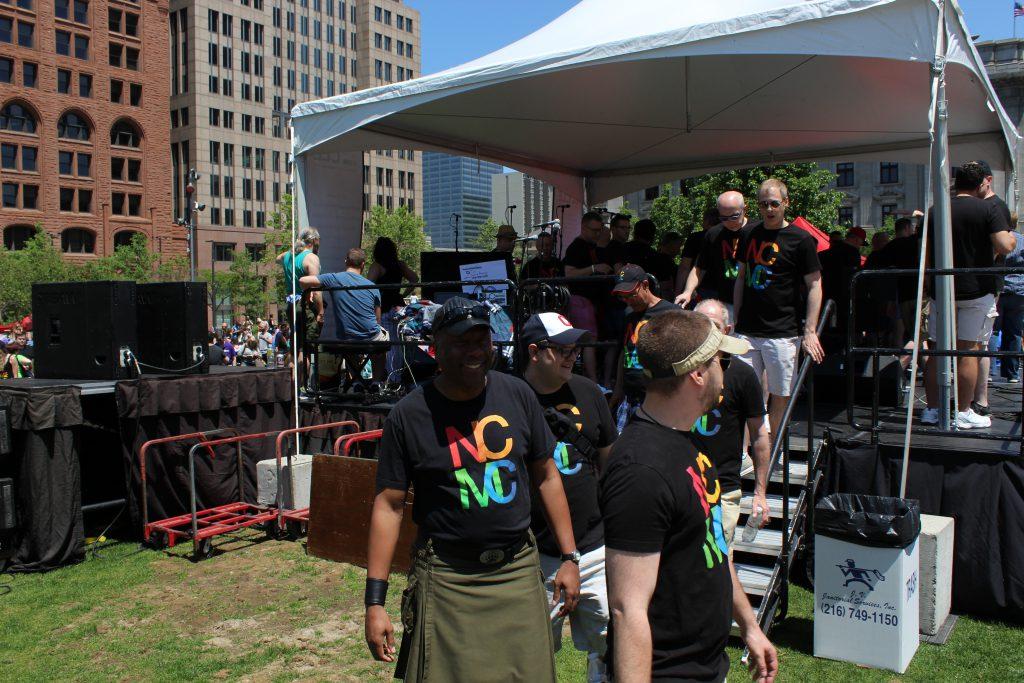 North Coast Men’s Chorus walk off the stage after a performance. Photo by Anu Sharma. 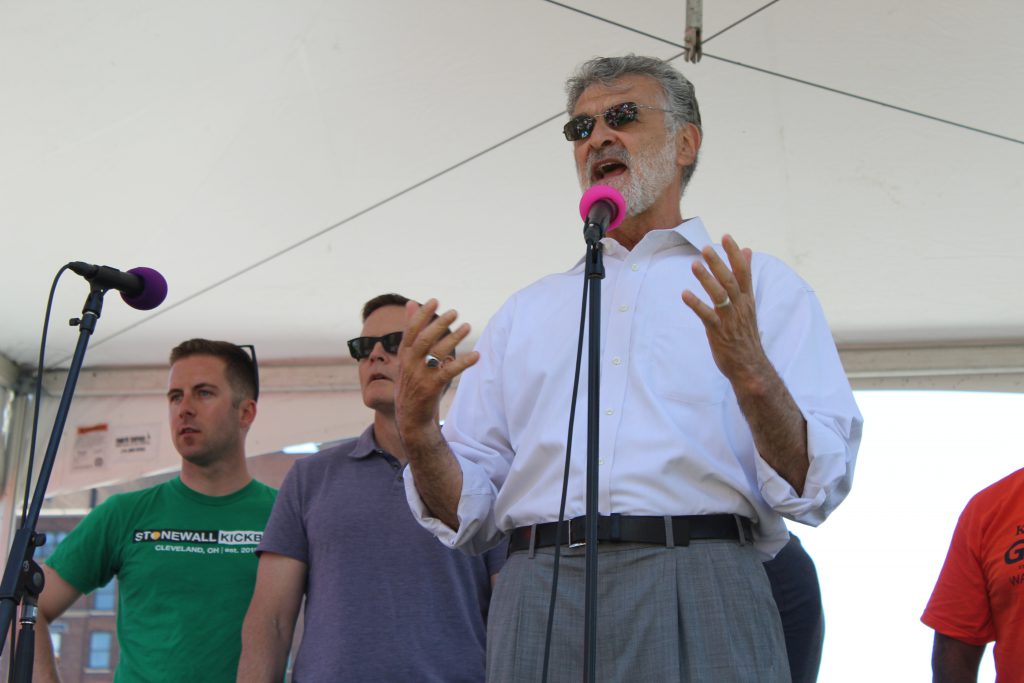 Cleveland’s mayor, Frank Jackson, attended the event. He moved about the crowd, speaking to and taking pictures with those that stopped him before taking the stage himself. 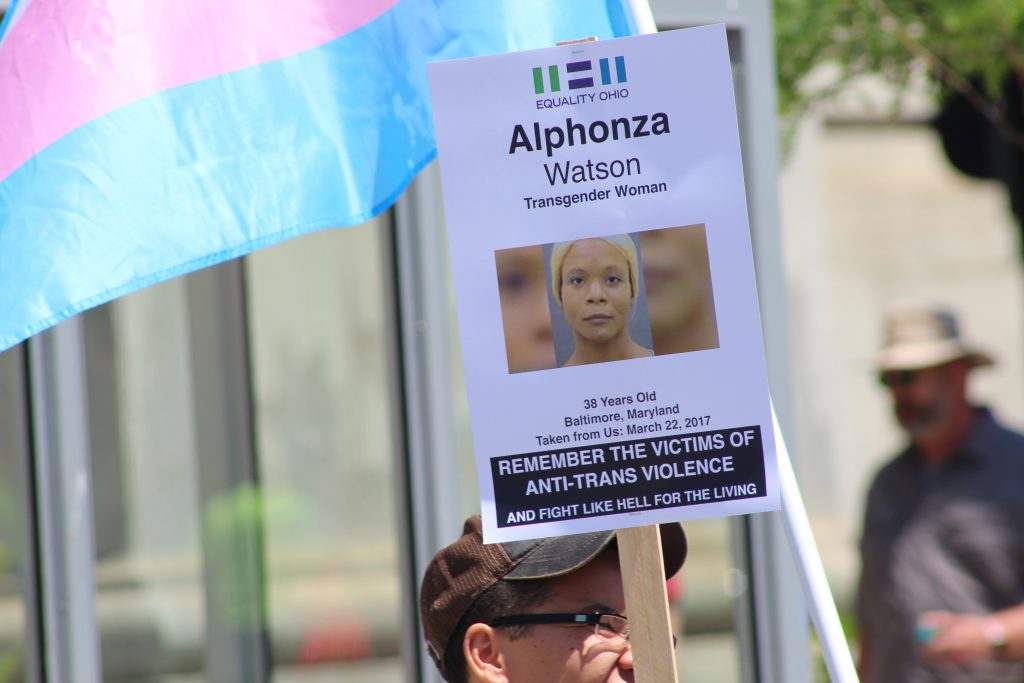 Equality Ohio carried signs in recognition of every trans person who was murdered this year. Photo by Anu Sharma. 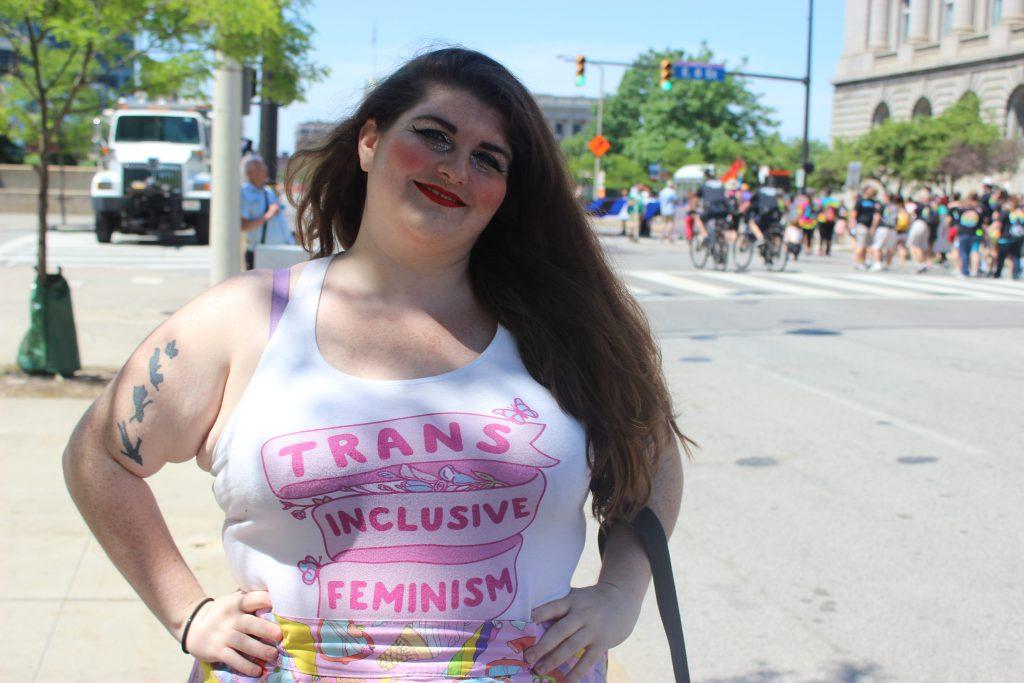 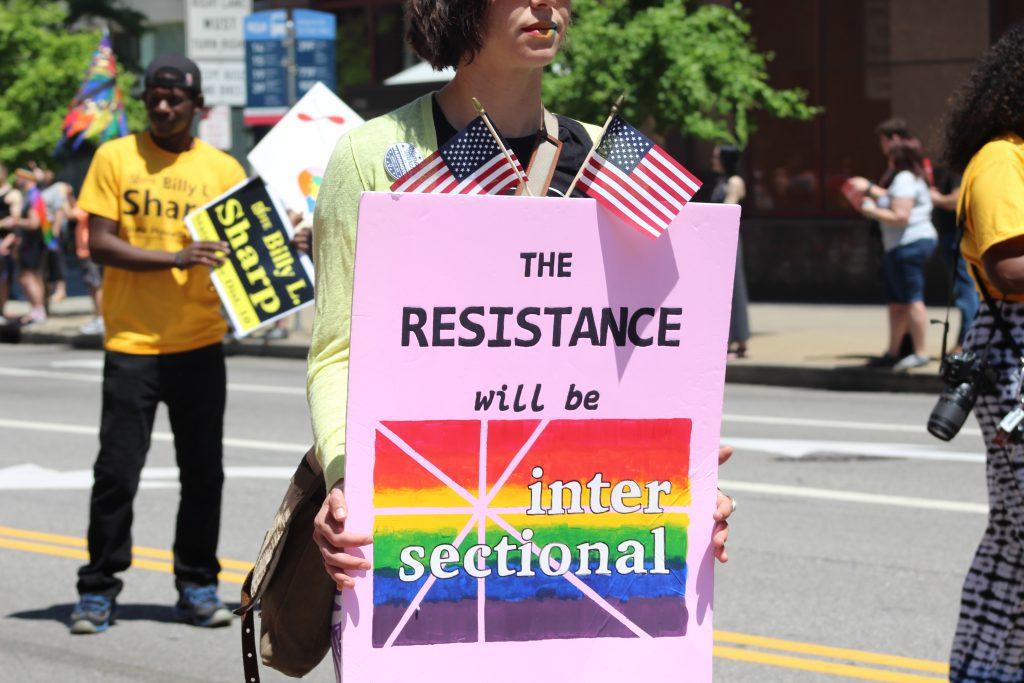 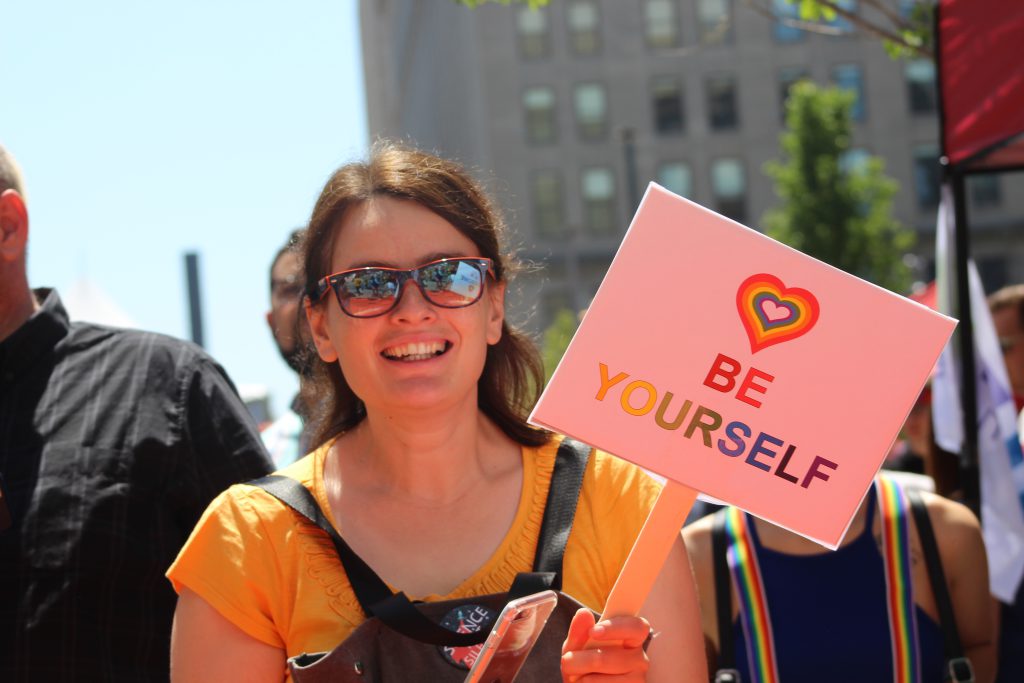 A woman smiles as she holds a poster “Be yourself” with a rainbow heart. Photo by Anu Sharma.

The lead sponsor of the event was Key Bank, for which a number of employees marched in the parade. Other organizations that marched included Planned Parenthood, Near West Theater and the Cleveland Stonewall Democrats. 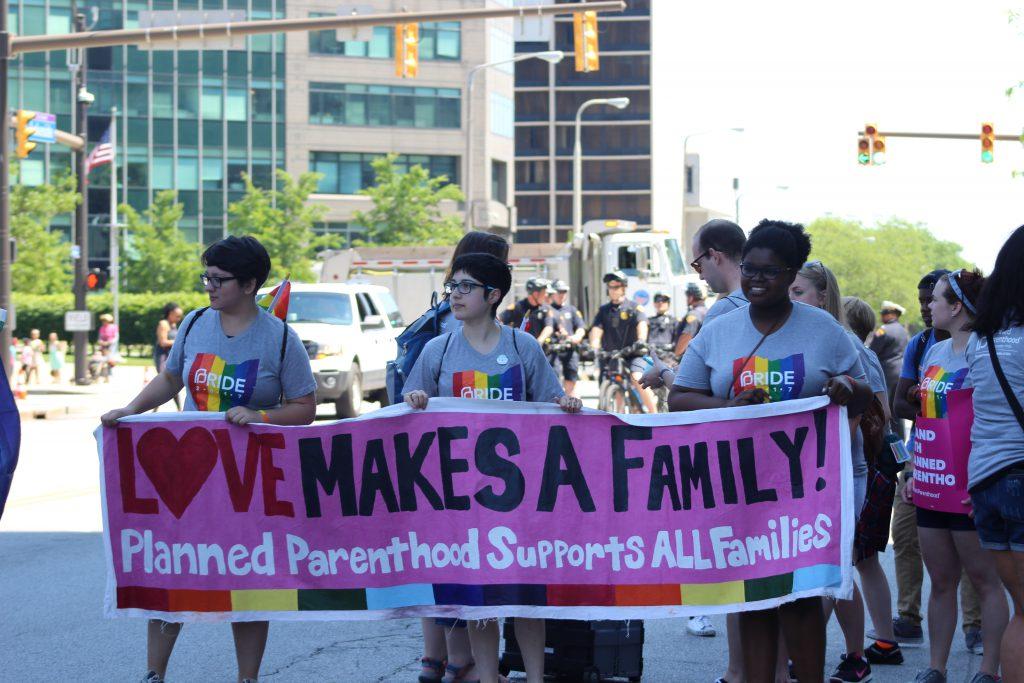 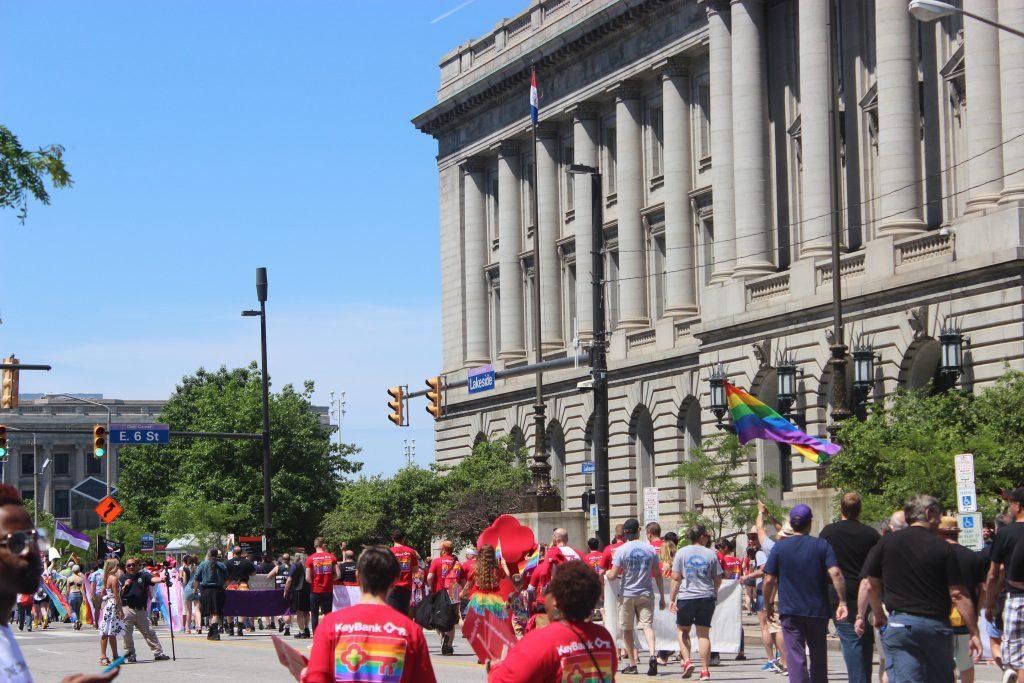 The parade begins at the corner of East 6th Street and Lakeside Avenue. Photo by Ella Abbott.

The Stonewall Democrats is an organization dedicated to “educating, endorsing, electing and holding accountable, pro-LGBT Democrats across Greater Cleveland,” per the mission statement on their website.

Trinity Cathedral, an Episcopal church in downtown Cleveland, marches in the parade with a banner reading, “God loves you, no exceptions.” Photo by Anu Sharma. 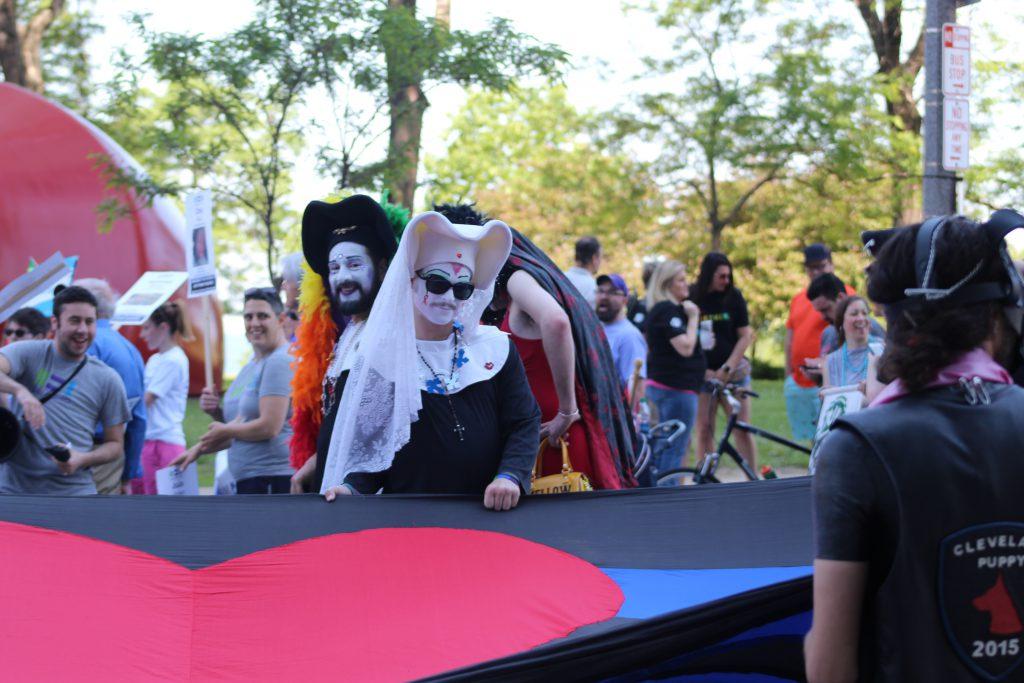 Sisters of Perpetual Indulgence, a charity nonprofit for HIV/AIDS and #LGBTQ causes, safer sex education and deconstructing gender. MJ Eckhouse pictured in the background with a megaphone. Photo by Anu Sharma. 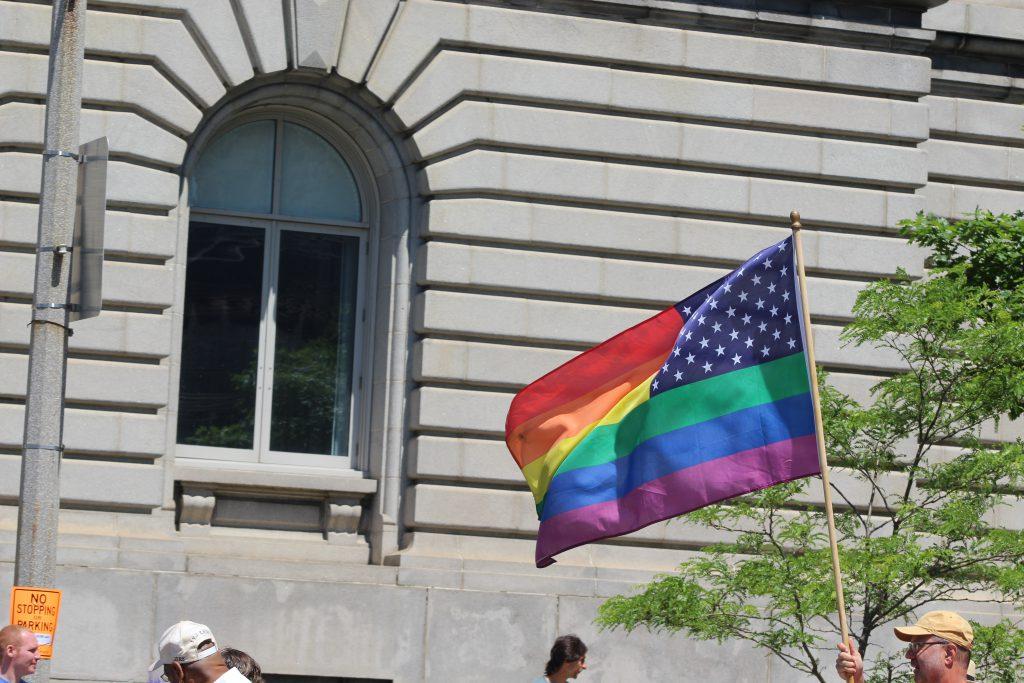 Marchers display an altered version of the American flag including rainbow stripes. Photo by Anu Sharma.

As the marchers moved from the staging area towards Public Square, people gathered along the parade route to watch and cheer. 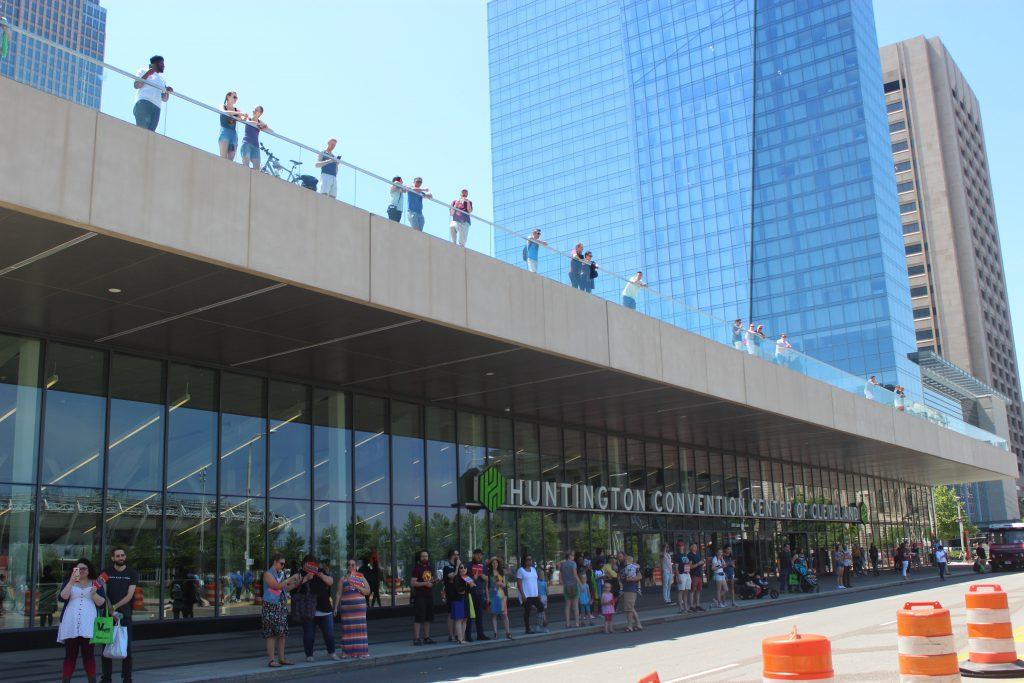 Editor’s note: MJ Eckhouse, editor-in-chief of Fusion is also an intern with Equality Ohio and attended this event as an intern.

#LGBTQ students, staff, and faculty gathered with allies on Tuesday, January 26th for sweet treats and new information about the Spring semester at #Kent State.