On Saturday, Columbus transgender advocate, Bobby Wakesleep, announced her plans to help provide educational resources about and for trans people. Her method is easy and accessible: ask public libraries to carry books about transgender issues.

Wakesleep wrote on social media, “Who wants to take a few minutes of their time to make trans people’s lives better, especially poor and isolated ones? I’m trying to increase access to good trans texts by getting libraries to purchase them.” 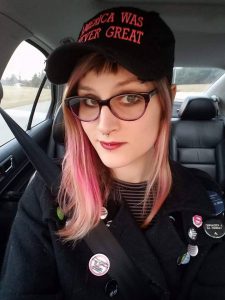 Her post continues, explaining how to effectively make such requests and clarifying that her primary goal is to offer trans people, particularly trans youth, with information and perspectives to help them understand themselves.

“The list is mostly devoid of books geared toward cisgender people,” writes Wakesleep. “This is simply because I prioritize getting books by trans people into the hands of other trans people, and do not read books intended to explain me to cis people because that would be kind of silly.”

She adds that it’s also important to provide cis people with books written by and about trans people, especially those cis people who have trans family members.

Wakesleep admits that her list is incomplete and encourages people to request books that she hasn’t listed. She divided her list into two categories, one list for “smaller, rural, isolated and broke” libraries, and another for “larger libraries in progressive areas,” which may already have the titles on the first list. She also included a third list, which she describes as the “fastest, least comprehensive and most personally-biased.” However, the third list also includes summaries which Wakesleep wrote. She explains that these summaries help convince libraries to make the purchases and says that people interested in working on the project may copy her summaries for that purpose.

“We really need people working on this at all levels of society and in all areas.” She wrote.

Wakesleep, which is a pseudonym she uses to protect her privacy, says she doesn’t do much else within trans activism. However, she runs an online clothing store, Calidora Clothing, which offers “shirts for angry trans girls, queer anarchists, internet oddballs and our accomplices.” She also gives yearly interviews to medical students and manages the pro-trans rights Facebook group, Keep Locker Rooms Safe.

So far, the Columbus Metropolitan Library has approved 15 of Wakesleep’s book suggestions.