On Saturday, Vera Campbell, her wife Caitlin and their three children visited the I-X Center Indoor Amusement Park in Cleveland. An employee refused Vera entry to the women’s room, where she was going to help her six-year-old daughter with her overalls. Vera said the employee repeatedly called her a man and blocked her from entering the restroom to help her daughter.

“She stopped me and told me, ‘I’m sorry sir, you can’t go in there.’ I asked why not, and corrected her calling me sir, and she explained, ‘I can’t let you in, there are women and young children in there.’ I explained that I am a woman, and that my child is one of those young children,” said Vera.

In Cleveland, it is unlawful to discriminate against #transgender people in public accommodations, including restroom use. The city enacted the trans-inclusive non-#discrimination ordinance last year.

According to Vera, the employee blocked her entry and said, “If you have a problem with it, we could call security over to handle it.” Vera then asked to speak to someone with more authority.

“I’m just like, this is crap, this is discrimination, you can’t do this, and she’s just ignoring me completely while we’re waiting,” she said.

Vera offered to show the employee her ID, which says female. The employee reportedly ignored this offer.

Since Cleveland’s law prohibits discrimination against trans people, Vera was not legally required to show her ID.

Three security guards arrived and one of them told the employee that since Vera ID lists her as female, she should be allowed in. The guards also suggested that she use the family restroom, which Vera said “isn’t the point.”

Vera explained that the chief security guard scrutinized her ID, then said since it matches, she should be allowed in the restroom. By then, Caitlin had finished helping their children and they were ready to leave the restroom area.

The incident made Vera feel awful and embarrassed, she said.

“I haven’t had to deal with that yet. Not here. I’ve had some dirty looks and stuff but nobody’s ever attempted to actually stop me from going into a restroom. It’s been a rough few months, so we were just trying to go out and have a nice night.”

However, this wasn’t the first time Vera encountered discrimination. She said she and her family have been discriminated against when seeking housing. She explained that they were forced to leave their #Kent apartment, breaking the lease. They spoke on the phone with landlords who seemed eager to rent to them, but consistently changed their minds when they met Vera and her wife in person. She said this happened dozens of times. 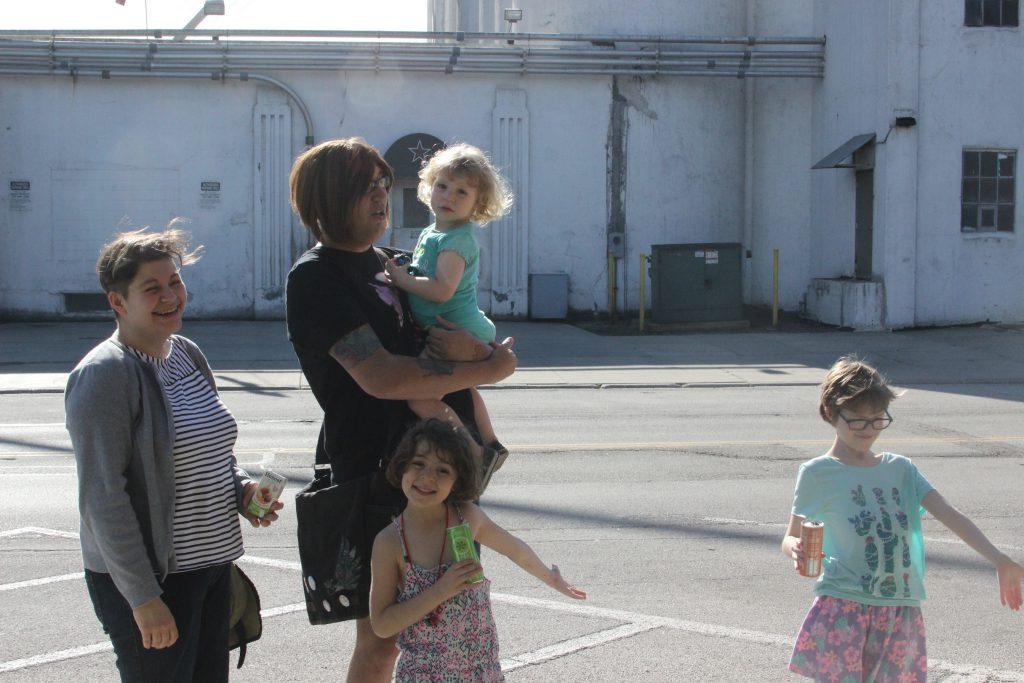 Caitlin (left), Vera and their children in Kent. Photo by MJ Eckhouse.

As a result, the family recently moved from Kent to Lake Milton. In 2015, Vera and Caitlin began plans to open a shelter for #LGBTQ people experiencing housing discrimination. However, the project was derailed due to zoning regulations.

After the incident at the amusement park, Vera contacted Equality Ohio, an LGBTQ rights nonprofit. Gwen Stembridge, the organization’s Northeast Ohio coordinator, gave a statement explaining that anti-LGBTQ discrimination happens, despite Governor Kasich’s claim that he hasn’t heard much about it.

“I intended to use the hashtag, ‘ithappensKasich’ because we at Equality Ohio know that this kind of discrimination occurs, which is why we advocate and educate about these non-discrimination protections. There was a video interview of [Governor] Kasich a few weeks ago, where, I believe it was Cleveland.com, actually interviewed him asking if he was going to advocate for fully inclusive non-discrimination protections at the state level and he said, ‘Well, if it happens in Ohio then we should do something about it.’ So, Equality Ohio has been working with partners to respond by having people tell their stories of discrimination in Ohio by having them use the hashtag, ‘ithappensKasich.'” Said Stembridge.

Vera plans to press charges against the amusement park.

“Nobody should have to deal with that garbage. Especially not in a city where it’s not even legal to do so. It shouldn’t be legal anywhere, but if it’s illegal, it’s illegal.”

The I-X Center did not respond to requests for comment.

Despite the humiliating discrimination, Vera and Caitlin decided to continue their day at the park so their kids could enjoy themselves. However, the children noticed how their mom was being treated.

“I didn’t feel very happy, because they said Mama was a boy,” said Cyan, 6.

Ellis, 8, agreed. “I felt very sad because of how my mama was getting treated very badly.”

“We can assure you that we have addressed the situation with our staff. In addition, we have reiterated our policy to all of our employees and made it understood that discrimination on any level is not and will not be tolerated in our facility. The bathroom attendant in question was not one of our full time employees, she was here working through a temp agency, because of that we have contacted the staffing agency to make certain they also reiterate to  all of their staff and temp workers our expectations of all workers in our building  as well as our policies in regards to any and all discriminatory acts. The IX Center has and always will be a facility that prides itself on welcoming all individuals into a safe and entertaining environment. We have reached out and spoke directly with the mother involved in this unfortunate incident and assured her it is not customary of our facility or employees and will not happen again in the future.”

Another update may follow, clarifying specifically how the I-X Center intends to prevent such incidents from happening again and what their current non-discrimination policy entails.

A twenty-something gay guy exits a #sex shop carrying his latest fixation in a plastic bag. You probably assume he’s bought anything from a…