In the 21st century we’ve seen an evolution of the #music industry with stars like Lady Gaga, Usher, Ke$ha and Taylor Swift. It’s hard to deny that stars have dominated the charts in the past 12 years and they all have something in common – they were discovered on their own, through hard work and determination.

Not only have we seen self-made artists dominate the charts this past decade, but we’ve also seen a rise in the number of 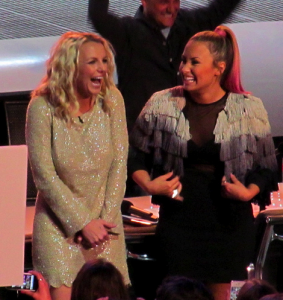 artists, such as One Direction, Leona Lewis, Kelly Clarkson and Cher Lloyd, who make it big using talent shows such as American Idol, The Voice and America’s latest, #The X Factor. The X Factor started in the UK by music mogul #Simon Cowell and is formatted differently than his previous show, American Idol. In The X Factor you’ve got four judges, or mentors. These mentors are the decision makers when it comes to getting through the audition round, and as with any talent show, you need a majority of the votes to make it through to “boot camp.” In the boot camp round contestants are asked to show their dancing skills and further demonstrate their singing ability. Shortly after boot camp, contestants are eliminated until 32 remain and these 32 are randomly split up to perform at the judge’s house. The judges then select a set number of contestants to move onto the live shows and the judges then become their “mentors.”

Now that the explanation of how The X Factor works is over, let’s all get into what you all came here for – my opinion on this season. We’ve seen the introduction of two new judges to the panel, #Britney Spears and #Demi Lovato. Let me just say that I’m a huge fan of both of them, but I take #pop culture seriously and I’m fairly critical. With that being said, I don’t have many complaints about Simon’s decision to bring in these two talented ladies. As we all know, Britney hit a bit of a snag back in 2007 and never quite recovered until recently. Even after her climb back up the ladder of fame it never seemed to me like Britney was quite happy with being back on tour, but maybe that’s just me. With her spot on The X Factor I’ve noticed a side of Britney we haven’t seen in a long time – she seems happy. She’s constantly smiling, laughing and just having a gay ol’ time. While Brit Brit’s happiness and joy is refreshing, it’s not always rainbows and unicorns, however – Britney’s proven to be somewhat of a critical diva as well.

Miss Demi Lovato, on the other hand, has surprisingly fit in the judge’s seat well. At first I was a bit skeptic as Demi’s still young and has quite a career ahead of her but she seems to be settling in quite well. I’m interested to see if she’ll decide to return for future seasons.

As with any #television talent show you get a handful of people who clearly know they’re terrible singers and are only there for the TV time, but this season has included a wealth of talent. With auditions like 15-year-old Dinah Jane Hansen’s rendition of “If I Were A Boy”  and Julia Bullock’s version of “Pumped Up Kicks” there’s no doubt in my mind that the judges will find and mentor a star who will dominate the charts through the better part of the rest of the 21st century.

It’s passionate. It’s surreal. It stops time. It takes your breath away. But in view of the larger picture, it only lasts a few…