Last Season on “#Empire”: Lucious was grooming one of his three sons (Andre, Jamal, and Hakeem) to take over Empire. Andre has Bipolar Disorder which normally affects the way he handles family affairs. He does a lot of the business for Empire. Jamal is very talented: he sings and plays piano but he’s also gay, which puts a huge rift between him and his father who is homophobic. Hakeem is the playboy rapper who loves to party. Cookie, Lucious’ ex-wife, helped start the company with drug money, was released from federal prison and returns to claim what is hers: half of her share of the company. Jamal has to fight his way to the top of the company and the whole family has to deal with murder, drama, accusations, jail, and illnesses.

Crowds of people have showed up for a #FreeLucious benefit concert. Most people think that Lucious was wrongfully put in jail (though he did kill his friend and Cookie’s cousin, Bunkie Williams, in Season 1), and don’t know that Lucious is in there for a good reason. His fans have started the FreeLucious campaign in an effort to free him. Meanwhile, Cookie is trying to mingle with people who can help Empire, which Jamal is now running. Hakeem and Cookie are planning a hostile takeover of Empire. Cookie uses the excuse that she is doing it for her boys, and although that may be somewhat true, she’s also using her children against one another. The concert is also a front to impress an investor because when it comes to her company – and Cookie – it’s all about the money. The money would help Cookie boost Empire.

A caged gorilla descends onstage. This is really weird and is somewhat later explained in Cookie’s speech. Yes, Cookie is in fact 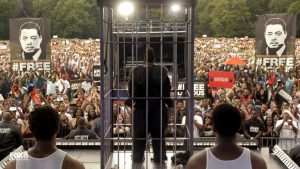 in the gorilla suit but it’s made to look as if it’s a stunt double. The costume seems too big for her and it did come across as a
huge surprise to see Cookie in the cage. A very interesting introduction indeed.

Lucious, in jail, sees Jamal performing on one of the nice TVs in jail. Another one of Cookie’s cousins, Jermel, (who is in jail for shooting one of Frank Gather’s men) alerts Lucious that Gathers himself will be coming into the jail. Gathers was a part of the drug schemes that Lucious and Cookie were a part of when they were younger.

While the concert is going on Cookie meets with Mimi Whiteman, a lesbian businesswoman who could add more funds to Empire. Mimi doesn’t hide her flirtatious attitude and when the camera pans to her and Cookie looking cozy at the concert, Lucious gets jealous. What else is new. Frank Gathers enters the prison and it’s really hard to take him seriously because he’s played by Chris Rock. While there’s nothing wrong with Chris Rock and his acting abilities, it’s really hard to take him seriously in a non-comedic role. It was just kind of weird. Especially since he was supposed to be an intimidating hardcore drug lord.

Jamal is struggling to be the businessman his dad wants him to be. From rescheduling meetings, ignoring his brother, and being an asshole, Jamal is spread thin and it’s not going to be good in the long run. He visits Lucious in jail where they talk about general business stuff and Lucious wants to know who the “Lesbian bitch” is that was cuddled up next to Cookie.

Andre wakes up from his recurring nightmare of him and his wife burying Vernon after they killed him. Rhonda assures him that they aren’t suspects of the murder so far. Back in the jail Frank Gathers talks to Jermel, Cookie’s cousin. Frank knows that Jermel killed his guy, Teddy, so he’s prepared to make him pay.

Cookie puts together some “lesbian party” in order to impress Mimi. Anika, Lucious’ ex-fiance as well as the woman who is sleeping with Hakeem (He’s not one to care about age differences), shows up at the party much to Cookie’s dismay. They discuss trying to wrap up the $250 million dollar deal all while Mimi makes goo-goo eyes at Anika. Subtle, isn’t she?Mimi still putting the charms on Anika, (she called her Anita) asks her to dance. Anika refuses but Cookie makes her, thinking that if she can get Anika and Mimi together they can seal the deal. Sex sells, doesn’t it?

Jamal finally has time to himself. He’s at his apartment, apparently back together with his ex, Michael. They’re honestly so cute together and I wish we would see more of them this season. They might be the only sane couple on the show. Though Jamal’s attitude could use some improvement it was very, very nice to see him pull Michael’s hair and give him a rough hot kiss. Now we’re talking! That scene gets me every time! And the look on Michael’s face afterwards says it all.

Trouble is still brewing between Jermel and Frank Gathers and it seems like it’s spilling to the outside. Cookie has received some suspicious flowers that her sister Carol wants to warn her about. Roxanne Ford, meets illegally with Lucious in jail. She’s a new prosecutor who’s determined to make Lucious’ life a living hell and keep him in jail. She wants to get Lucious to snitch, he doesn’t think much of her, calling her a “black bitch in cheap shoes.” After the meeting, Lucious comes across Frank meeting with his two daughters, one of which is Frieda who is apparently a good rapper and Lucious takes interest in her musically.

By now the time has come. The hostile takeover is in place, the money seems to be good and Anika, Cookie, Andre, and Hakeem burst in on Jamal’s business meeting. Technically they wanted to take Empire from Lucious and remove him as CEO but Jamal didn’t take too kindly to that. Though Lucious has been cruel to Jamal it seems that ever since he chose Jamal to run Empire their relationship has improved exponentially. But the joke is no Cookie and company as Mimi Whiteman is at the meeting. She’s met with Lucious and has created a better deal, one that doesn’t mean she’s removing Lucious from the equation.

As the episode is winding down we see Jermel who is now beat up and forced to watch Frank Gather’s eat a meal. Jermel says that it was Cookie who put him in jail which creates a whole new enemy-Lucious.  Cookie returns home to find a mysterious box in front of her door and her sister in her house. Carol explains that the mysterious roses are from Frank, for real. And inside the box is the rotting head of Jermel. Even though Lucious is against Cookie and mad at her for the attempted takeover, he is still protective of her. And when you mess with family…well, you die.

Stand-up comedian, actor and #LGBTQ activist, Shane M. Stahl, 32, is a native of northeast Ohio. As a teenager he came out as gay,…