Season 2, Episode 2: “Without a Country”

Previously on #Empire: Lucious found out he doesn’t have ALS, which means he might be around longer. Cookie told Tiana that she was still family to them (yet we barely see any of Tiana) and Cookie is looking to record back at the “ghetto” studio. Roxane Ford was trying to get Lucious to plead guilty, but he refused. Cookie tried the hostile takeover with Mimi Whiteman but was thwarted by Lucious. A family meeting ended with Cookie viciously slapping Jamal, although they both didn’t want to hurt each other.

Cookie, Andre, and Hakeem are forced to remove their office stuff out of Empire. She starts gathering together people to help her build her own company. Cookie seems to think that she can use the album Hakeem recorded at Empire to further their company and get them off the ground. Hakeem argues that he’s more than a rapper and wants to try his hand at recording, all the while undermining his mother and letting Anika in on it all, even though Cookie hates her. This seems like it can go wrong on so many levels. Andre is still on the fence about joining Cookie’s new company but his heart lies with Empire.

Hakeem comes up with the “wonderful” idea to start a girl group, which Cookie agrees to. But first they have to find an actual recording space and set up. Cookie tries to bargain with Ghetto Ass Studio and is surprised to find Anika recording with V. Now this is the first time in a long time (since episode 1 of the first season) that we’ve actually seen V singing. It’s almost as if they forgot about her. Shocking. She singing a song that is definitely not as powerful as her first track “What is Love?” and aside from the show V is actually a very talented and impactful artist. I didn’t connect with the few bars she sung however. But back in the show, V’s having a stereotypical artistic tantrum which Cookie tries to quell.

Back to Lucious in prison: it seems like his paperwork for his medicine has mysteriously disappeared from the prison records, which means that Lucious cannot get his drugs. Though he doesn’t have ALS now, Lucious has been re-diagnosed with myasthenia gravis (a neuro-muscular disease that leads to fluctuating muscle weakness and fatigue).

Cutting back to Jamal, we see him performing a song for an online interview. I thought Jussie Smollett’s acting here was really amazing. He seemed super natural and like he was actually answering questions for a real interview! Cookie then bursts onto the scene, interrupting the interview (which is live recording I’m sure) to ask Jamal about letting Hakeem have the royalties to his album back. They walk out to the balcony together pretending everything is OK for the public eye. Cookie also drops the bomb that she is starting a new company right as she’s leaving. 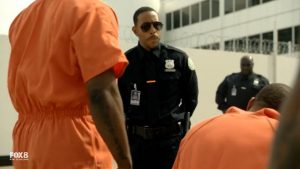 Lucious is enjoying some time with his friends (or lackeys) on the rec yard of the prison. Now we get to see this episode’s guest star–Ludacris! He plays one of the guards at the prison and looks absolutely amazing in a cop uniform! Very sexy! Lucious goes into a coughing fit (which is a side effect of his disease) and attracts the attention of Ludacris. Ludacris isn’t a nice cop and handles one of Lucious’ “friend” harshly, yelling and forcing him into handcuffs though the “friend” didn’t really do anything too drastic.

Hakeem has begun the try-outs for his girlgroup and he finds a prissy stuck up girl with an attitude named Valentina. She wants to be a big star all by herself and refuses to work in a girl group. I hate this character actually. For the first Latina character on the show, this isn’t really good representation. She’s just so pathetically annoying and her Spanish accent is strange (with some googling I found that she is played by Becky G, a Mexican-American singer), and seemed like it was forced. Hakeem is smitten with her and still wants her to be in the group even though she refused. Andre doesn’t think it’s a good idea for Hakeem to be spending all his time on this new girl group instead of working on his music. To be quite honest, Hakeem is one of my least favorite characters and I really don’t care what he does with his career. I have a feeling that Cookie’s new company will crumble soon and they’ll all go back to Empire. Not even Hakeem’s group will save them.

Lucious confront Ludacris again. The exact motive for Ludacris’ mistreatment of Lucious is that he should not get special treatment just because he is a celebrity, which is a decent approach but I don’t think he has to be so aggressive about it. It’s an excessive use of force and aggression, perhaps a reflection on what is happening with African Americans and the police system today (similar to the message at the beginning of episode 1). He also seems to be in favor of Roxanne Ford and reveals that he has taken the authentication form Lucious needs to have access to his medication. Jamal then meets with Lucious to discuss Empire business. Jamal tells him about Cookie and Lucious tells him about dropping a single from inside prison. A mysterious man in a pimp suit overhears their conversation and introduces himself as Thurston “Thirsty”  Rawlings who says he can be of some service in the fight against Roxanne Ford.

Now we cut to Tianna and Hakeem tries to recruit her into his girl group to no avail. Jamal pulls up to the Ghetto Ass Studio just as Hakeem is exiting and commands him to get into the car, telling him how Lucious wants him back at Empire. Later on, Valentina is in a hot tub with Hakeem. She says that she studied Spanish in high school, so that may also be why her accent is weird.

Rhonda is at Jamal’s place, voicing her concerns about Andre to her brother-in-law. She’s pleading for Jamal to take Andre back at Empire. She also drops the news that she’s pregnant which convinces Jamal to talk to Lucious about letting Andre back in.

A corrupt guard drops off some medication for Lucious, saying that it’s from Thirsty. They then head out to a small supply closet where Lucious’ friends are set up with recording equipment. They record the song and get interrupted by Ludacris who makes a big deal out of the situation. He sends Lucious to solitary and talks down to him, making more threats. When Ludacris (His official character name is McKnight) gets off work, he’s violently attacked in the parking garage. Their motive is to get the track that Lucious recorded in jail. The people that beat up Ludacris then pass the computer (with the files on it) to Thirsty. I guess you have to continuously play dirty to get what you want, a running theme in the show.

Hakeem illegally drops his album online which is still under Empire royalties, meaning that Empire can now sue Lyon Dynasty for using their music without permission. Andre takes this as the straw that breaks the camel’s back and decides once and for all to quit Cookie’s company and put all his effort into helping Empire. Cookie finds a company space and decides on the name Lyon Dynasty. It was definitely better than “Pride of Lyons.”

Andre goes to see Lucious in jail to try and patch things up but that doesn’t really work. Lucious denies him almost instantly. Andre questions why his father hates him and Lucious has a flashback of his mother who is bipolar (which is where Andre gets it from). Lucious can’t help but to see his mother in Andre and he says that he doesn’t hate his son. I don’t think he can cope with seeing his mother’s illness in his son just yet. It seems kind of weird to me since he’s apparently coping with Jamal being gay now and he had a problem with it throughout the first season.

Hakeem and Jamal seemed to be having a moment but then Hakeem tells him about how he leaked the album online. Jamal doesn’t take it well and kicks Hakeem out stating that he’ll sue him. Lucious’ new song is now on the radio. The episode ends with Lucious in court and everyone is waiting for Thirsty to arrive. He’s extremely late but claims that he has some stunning new evidence. He presents the “evidence” to the judge and Roxanne. The judge’s file however contains pictures of him in various BDSM acts, so Thirsty is actually blackmailing him. (We can only assume that Roxanne’s files don’t have these “interesting” pictures.) The judge then decides to release Lucious on bail which is set at $1 million, easily payable with the money Empire makes. So Lucious is back on the town and ready to take what’s his.

LET’S #BARACK N’ ROLL, OHIO If you thought your vote didn’t count in this great state we live in, think again! When Obama took…