What has twelve letters, is worth $26 billion dollars, and has the single most recognizable set of initials in the world of #fashion? If you guessed French-powerhouse #Louis Vuitton, often stylized as LV, you guessed correctly. A manufacturer of everything fashion from wallets, bags, and luggage to gowns fit only for a Na’vi princess (yeah, sometimes I’m a geek, too), Louis Vuitton has been a staple on runways around the world for decades.

But what is it about this iconic brand that screams it’s the best in the business? It’s super-fucking-fabulous artistic director, #Marc Jacobs. 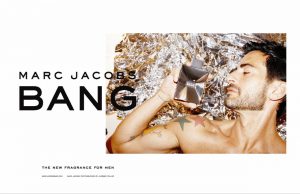 Marc Jacobs in his own cologne advertisement.

Jacobs isn’t only in charge of all things creative for LV, but he has two of his own #design lines (Marc Jacobs and Marc by Marc Jacobs). A bit narcissistic maybe, but you would be too if you had half of the bravado Marc has. I mean, none other than fashion’s badass would wear a sheer lace collared dress to the Met Ball, an annual event at the opening of the fashion exhibit housed at the Metropolitan Museum in New York.

But, in all reality, Marc Jacobs has earned his spot in the fashion universe – over his fifteen years as Louis Vuitton’s Artistic Director, the brand has not only expanded into a prêt-à-porter (ready-to-wear) clothing line, but has become the top selling luxury brand year after year. The fashion house, which always sells, has had its high points (fall/winter 2009) and it’s lows (fall/winter 2012). Like, Marc, what were you thinking with those hats? They are not cute.

Nevertheless, Marc has been a philanthropic asset to the #gay community with numerous products donating their proceeds toward funding AIDS research. His work in and out of the fashion world has earned him the fourteenth spot on Out Magazine’s 2012 “50 Most Powerful Gay Men and Women in America” list. In 2010, he was named one of Time Magazine’s “Time 100”. He has also received nine awards from the Council of Fashion Designers. And, as if that long list isn’t cool enough, Marc Jacobs is a Chevalier of the Order des Arts et des Lettres in France (that’s like being “knighted” in England, in case you’re unfamiliar).

Bottom line is that this guy’s got it all, but you don’t have to tell him twice. If you were Marc-fucking-Jacobs, you’d know too.

Some attribute the beginning of the queer liberation movement to transgender people of color. Currently, there are places that are not made with…