By Autumn Holzemer and Carlyle Addy.

“Authentic living is how I got up today,” said Wriply M. Bennet, answering a question during a Q&A session at the first-ever Trans in the CLE conference on Saturday.

Earlier that morning, Bennet woke up, got out of bed without time to braid her hair, threw on a wig and headed out the door to the conference. Bennet is an activist and artist who delivered one of the keynote speeches.

The LGBT Center of Greater Cleveland and Planned Parenthood of Greater Ohio partnered to organize the conference.

Ever Bolden, the other keynote speaker, described authentic living for him as recognizing support from family, friends and his faith community. He adds that authentic living is not the same for everyone.

“Your journey is a personal journey. Don’t let anyone else dictate what you’re supposed to do and not do,” he said. 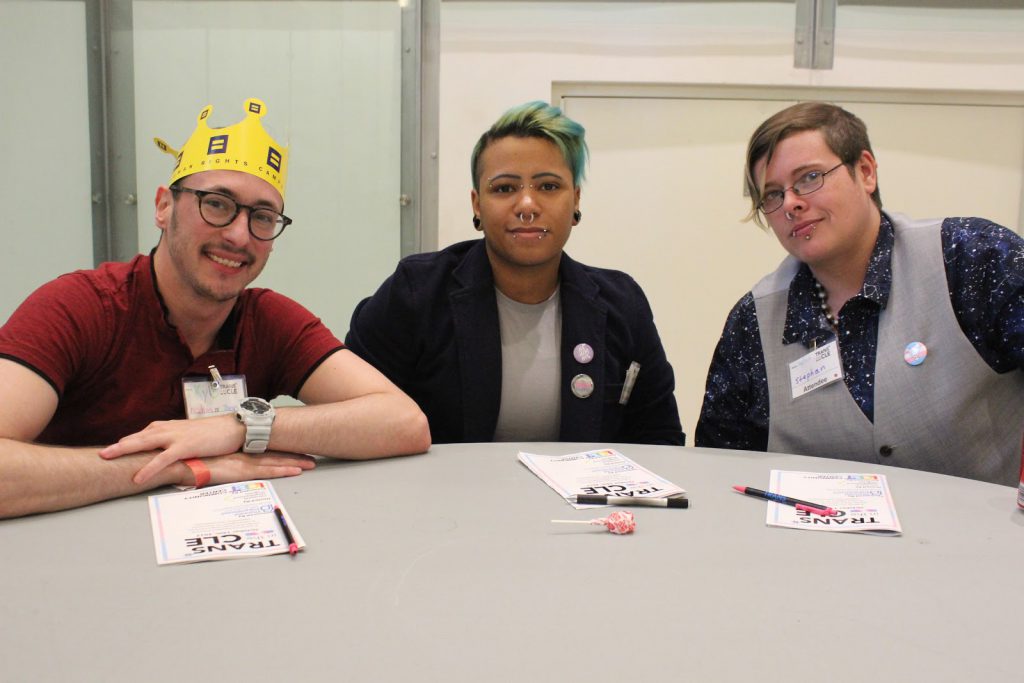 After the keynote, the conference attendees split between several workshops.

At one workshop, titled “Freed in the Body,” attendees spoke about their journeys–especially as nonbinary individuals. Several people shared about being misgendered by family or coworkers. Zac Boyer, workshop facilitator, told a story about a straight, cisgender coworker who refused to acknowledge their pronouns. Boyer said that they explained to the coworker that using male pronouns for a nonbinary person equates to using feminine pronouns for a man. Attendees of Boyer’s workshop also shared stories of being misgendered by medical providers, prompting a discussion of RAD Remedy, a search tool to help trans people find competent medical professionals.

During lunch, attendees talked about why they attended the conference. They all came looking to gain more resources for themselves, their workplaces and their communities. 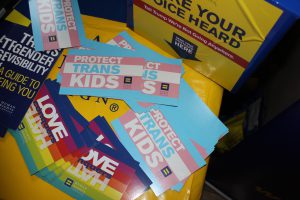 Postcards waiting to be delivered to President Donald Trump. Photo by Autumn Holzemer.

Princess McDowell, a poet and writer from Dallas, led a session about assigned and current names. McDowell gave the group time to write about the origin of their names. Then, some people volunteered to share what they wrote.

Bennet was one of the “Black Pride 4” protesters arrested for disrupting the Columbus Pride parade in June. The protests objected to systematic racism, both in the LGBTQ community and the nation at large. Bennet expected the group of 10 protesters to be larger and almost called it off. Instead, a racist remark from a white parade attendee reinvigorated Bennet. She put duct tape over her mouth and walked into the street. The group of protesters blocked the parade route and four of them were arrested. Bennet said she was held in a men’s facility and regularly misgendered both by law enforcement and by the media. Bennet’s trial date is set for Nov. 20.

Accordingly, one workshop focused on the consent decree currently in effect in Cleveland. This decree puts police policies under scrutiny and gives the community a chance to review and change current Cleveland Division of Police policies. Mario Clopton-Zymler, former chair of the Cleveland Community Police Commission, spoke about the need for bias-free policing. He said the commission is currently focused on bias-free policing. Clopton-Zymler cited statistics on police officers harassing the LGBTQ community from the Williams Institute.

This information box about the author only appears if the author has biographical information. Otherwise there is not author box shown. Follow YOOtheme on Twitter or read the blog.

A previously rejected case attacking spousal rights for gay spouses of government officials in Houston, Texas, is now being reconsidered by the Texas Supreme…