My wife and I attended the Game Change Conference held in the #Kent State student center on Oct. 9. The conference, hosted by Kent State, the #LGBTQ Student Center and KSU’s Center for the Study of Gender and Sexuality, offered a unique opportunity for the LGBTQ community to network together.

Beginning at 8:30am and continuing through 4pm, the conference included educational sessions, lunch and a keynote speaker. There are three sets of sessions and each session includes four different educational seminars for attendees to choose. Each seminar has a speaker from different local or state LGBTQ organizations including Equitas Health, GLSEN of Northeast Ohio, PFLAG, Equality Ohio, CANAPI and University of Akron’s LGBTU. 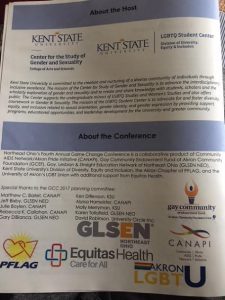 Speakers included professionals, students, allies and LGBTQ community members who brought their unique knowledge and experiences to rooms filled with the curious, the novices and everyone in between. It was simply a great way to socialize while learning and sharing, as well.

I was only able to make it to two sessions and lunch but my wife attended the entire conference and all three sessions. For both of us, it was an experience worth sharing.

At check-in, we were each given a satchel designed like a messenger bag with the conference’s program inside. The program contained a schedule with details for each session and speakers’ names. The program also provided information about the tireless organizers who put the conference together, including Kent State’s Ken Ditlevson of the LGBTQ Student Center and the Sociology Department’s Director of the Center for the Study of Gender and Sexuality, Molly Merryman.

The program also listed a photo and some information about this year’s keynote speaker. To our delight, it was someone we both respect and are inspired by, the Human Rights Campaign’s National Press Secretary Sarah McBride! 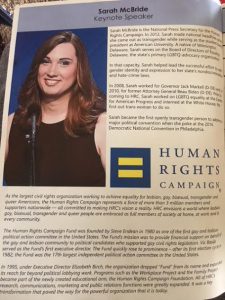 My wife and I determined which sessions to attend Luckily, we were interested in the same ones, unlike last year. We chose “Know Your Rights: Trans in Ohio.” The session was about navigating and advocating for the health and wellness of transgender people under Ohio’s current political realities. The speaker from TransOhio even included a detailed presentation about the laws and protections (or lack thereof) for trans Ohioans. The presentation also covered topics including bullying, Title IX Protections, employment, legal, housing and healthcare rights and trans students’ rights at both the high school and the college level. It was informative.

Another session we attended was “Trans Rights and Resistance in Trump’s America,” which covered the unfortunate reality of the politicization of trans people and their rights nationwide. It was a fantastic reminder by a speaker from Equitas Health, of how far the LGBT community has come regarding equality as well as how far we still must go to ensure political equality for all members of the community.

Other sessions included “Fostering an Inclusive Workplace for LGBTQ Employees,” “Being a Respectful and Engaged Ally” and “Sexual Prejudice and Sexism: Two Sides of the Patriarchal Coin.”

During lunch, Sarah McBride gave an unbelievably moving and inspiring keynote speech. She spoke to the hearts and minds of everyone who attended. She also did a Q&A at the end where she spoke individually with anyone who was interested in getting to know her and her work a little better. I got to meet her personally!

McBride is an unbelievable force; inspiring, strong, brave and unwavering in her dedication to elevate LGBTQ voices. It was an honor for us to have her in attendance and to meet her afterward. Like McBride herself, the 4th annual Game Change Conference is a game changer, as it strives to ensure that all voices, big and small, LGBTQ or cis and straight, are represented, given a space to thrive and a voice that will be heard.

Black Queer & Intersectional Columbus (BQIC) is calling for charges to be dropped against the ‘Black Pride 4,’ who were arrested on June 17…