Kyle Griffith is a server at a Buffalo Wild Wings in Kentucky. He happens to be gay, and recently had a disappointing encounter involving two girls he served.

After serving these two girls on the night of Jan. 17, Griffith cashed them out and left their receipt on the table. When he came back, the girls were gone, and for some reason, they left no tip.

Instead, he found a handwritten message left on the receipt by one of the girls. This message read “Sorry I don’t tip f—–s” and “# UNeedJesus.” 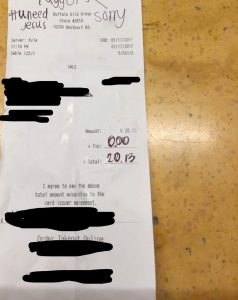 The receipt, posted by Griffith on his Facebook and by a friend on Imgur.

This was quite upsetting for Griffith, as he explained in an interview with WDRB, a local news station in Kentucky. He told the interviewer that, as a server, he depends on tips as a main part of his income. On top of that, the unfair treatment understandably angered him..

To ensure that the public could be aware of what happened, Griffith took a picture of the receipt and posted the photo to Facebook. To his surprise, the photo was shared by many people. In addition to that, Griffith actually received a comment on the photo from the offending customer.

The girl apologized, while saying that she had been only joking. Griffith took the apology with grace, but also noted in the interview that his sexual orientation is nothing to joke about.

Throughout this incident, Kyle Griffith, although reasonably angry, was nonetheless quite merciful in how he dealt with this customer. When he posted the receipt photo to Facebook, he edited out her personal information so it wouldn’t be public. In the face of homophobia, Griffith followed former First Lady, Michelle Obama’s advice, “When they go low, we go high.”

His reasoning for this was simple: he wanted the problem, not the person to be the focus of the public’s attention.

This is an impressive attitude towards a harasser. It would have been simple for Griffith to enable the internet to direct its vengeance towards the girl. But in the end, he chose the higher ground.

Of course, that isn’t always the easiest choice to make. The desire for revenge after being harassed is all too human. Griffith’s decision to act with grace instead of anger indicates that he has the “Christian” morals that they failed to show.

#Kent State’s Black Squirrel Radio now has an #LGBTQ-centered show, This Is For The Outcasts. The show’s title comes from a song lyric by G.L.O.S.S., a “queer…