This week, someone stapled a hateful, anti-#LGBTQ flyer on a Cleveland State University (CSU) bulletin board. The flyer includes an illustration of a silhouette hanging from a noose and the text reads, “Follow your fellow faggots,” along with several claims about the frequency of LGBTQ-related suicide attempts.

The words, “fascist solutions” appear at the bottom of the flyer next to a Nazi symbol.

In May, a similar flyer was found at a bus stop in Houston.

Another poster was stapled above, with an illustration of a white man and woman above the words, “We have a right to exist.”

Photos of the posters circulated on social media yesterday. Nicole Zollos, a Cleveland State student, posted the photos yesterday evening. Her post has been shared 119 times.

Zollos said she was “shocked and appalled” that someone at CSU would do something like that. She said the person who put up the posters clearly did not have approval from the university, since CSU requires all flyers posted on their bulletin boards to have prior authorization and these posters lacked the approval stamp.

CSU recently opened a new LGBTQ center, which Zollos suggested was probably the motivation behind the posters. She said that while she felt hesitant about publicizing such views, she wanted to dispel the notion of “not in my  backyard” and demonstrate that “people like this exist even in our own community.”

Today, CSU President Ronald M. Berkman sent an email to the students, faculty and staff commenting on the posters. The letter reads:

Tristan Rader, a Democratic candidate for Lakewood City Council, said the university should clearly condemn bigotry instead of attempting to balance “both sides.” 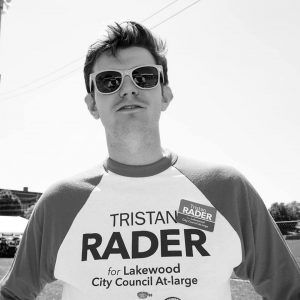 “That’s not enough,” said Rader, in response to the president’s statement. “People want to make it about free speech when it’s about hate.”

Rader, an alumnus from CSU and #Kent State, said the CSU administration reached out to him about the incident. He said they are proud of him, as an alumnus running for office, so he hopes to achieve a stronger response.

“This is the time to fight bigotry of the worst order,” wrote Rader on Facebook, where he shared the photos. He implored the CSU administration, “Now, stand the hell up for your LGBTQ+ students and students of color!”

President Joe Biden nominated Pennsylvania Health Secretary Rachel Levine as his administration’s assistant secretary of health on Jan. 19. If approved by the Senate,…