When Merriam-Webster announced it added the non-binary pronoun “they” to the dictionary on Sept. 17, it was met with both considrable praise and backlash.

Since birth, children learn about pronouns and what it means to be a boy or a girl. At such a young age, we are taught that your pronouns directly relate to who you are biologically, but we are now becoming more aware that sex and gender are not one and the same. 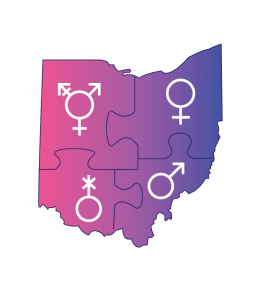 “[Pronouns are] a very important piece of our identity and who we are,” says Ken Ditlevson, the director of the #LGBTQ+ center at #Kent State. “Just being able to refer to someone in a respectful way, that’s what pronouns are all about.”

It can be almost second nature to refer to a person by their biological gender, but as time goes on, more evidence is being presented that there are more than just two genders and two pronouns, and that pronouns do not always coincide with your biology. The World Health Organization defines gender as, “the socially constructed characteristics of women and men, such as norms, roles, and relationships of and between groups of women and men. It varies from society to society and can be changed.”

It begs the question: When should we start teaching our younger generations this information? Planned Parenthood says that children can become aware of gender as early as two or three years old, and that when some people do not feel they identify with their biological sex then they will chose to identify as another lable such as genderqueer or genderfluid. 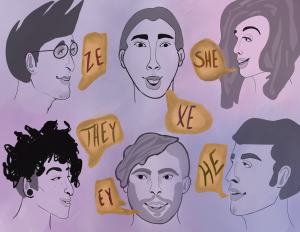 Katie Mattise, the assistant director of the LGBTQ+ center, thinks it’s the earlier the better.

Mattise says that by teaching our future generations early, we can make diverse pronouns common knowledge. This will not only help us work on our conversational skills, but also boost our relationships and improve the lives of LGBTQ+ kids.

“You can make assumptions based off of someone’s gender expression but sometimes those assumptions are going to be wrong and will drive a wedge in your relationship,” he says.

He suggests introducing yourself with your own pronouns first to help make that person more comfortable with you.

Kent State has a number of initiatives to support its LGBTQ+ students on campus. The LGBTQ+ center on campus offers ally training to Kent State students in order to help them learn more about the community and how to support their LGBTQ+ friends and classmates. In the dormitories, RA’s have been trained to ask residents what their preferred pronouns are in order to make the students feel more comfortable living amongst their peers on campus.

The easiest advice for students who want to be better with using pronouns is to just try and learn more. Ditlevson says to not be too hard on yourself, it’s natural to make mistakes and misgender from time to time.

Understanding and trying to better yourself at correctly using pronouns will not only help you get better, but also help teach those around you to use them properly.

Editor’s Note: Story Reported by Kent Wired, Madeleine Winer Freshman Brandon Stephens had a roommate last year who was uncomfortable with Stephens’s homosexuality. “He would…