“This was my first time in drag out of the house,” is not a sentence one expects to hear from someone who was just cheered offstage by over 100 people, but Karen Isaacs walked away from an impromptu performance with a smile. She was one of the three audience members who volunteered to show off their best runway walk at Queen Esther’s Ball, while the next scheduled performer was changing.

“It was just like a total high. It was so cool,” Isaacs said.

Isaacs wasn’t the only one with a new experience from the event. Performer Anhedonia Delight said it was her first Purim.

Anhedonia Delight has been performing for two years. Before that, she dressed in drag for Halloween and saved the costumes in her closet.

Like Halloween, Purim is a holiday that usually involves costumes, based on the story of Esther, a Jewish figure who concealed her identity in order to marry the Persian king and prevent an attack against the Jewish people of Persia. Many Jewish temples and synagogues hold annual carnivals to celebrate the holiday.

In fact, both student organizers of the event, Arin Weinstein and Rachel Marchese, remember carnivals at their temples. Weinstein’s mother used to dress her as a hamentaschen (a type of Jewish pastry traditionally associated with Purim) every year. Marchese remembered playing games with her sister at their festival. She said her sister still has a stuffed animal from one of the carnivals when they were young. The two of them wanted to extend this tradition to the campus community. 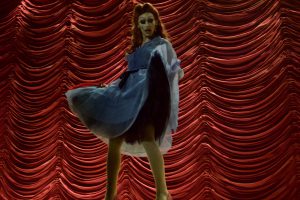 Hillel worked with the #LGBTQ Student Center to put on the event, but Katie Matisse, program coordinator of the LGBTQ Center, said that Hillel primarily organized the event. Like Anhedonia Delight, it was Matisse’s first Purim, too. They were excited.

“Faith can be an area where people can find either hate or love,” said Matisse.

According to both Matisse and Hillel Executive Director Adam Hirsh, Hillel has a great relationship with the LGBTQ Student Center. Last year, the two groups worked together to bring the first openly gay Jewish Orthodox rabbi, Steven Greenberg, to campus.

After headliners Aurora Thunder, Peach Fuzz and Anhedonia Delight closed the night with a powerful Beyoncé number, attendees had a chance to dance and eat nachos with the queens.

The year 2012 was a pretty historic year in terms of #marriage equality. The lower house of Uruguay’s Congress voted in overwhelming support of…