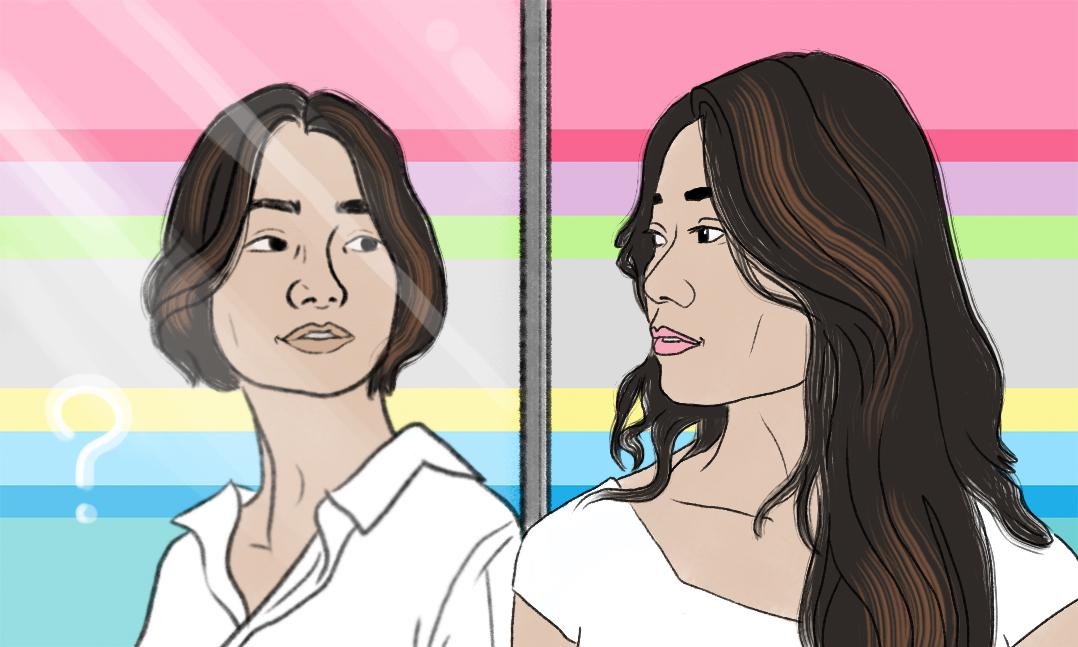 The COVID-19 pandemic has negatively impacted the #LGBTQ+ community in a myriad of ways, from isolation in unaccepting households to lack of access to medical procedures. According to a survey conducted by the Trevor Project at the start of the pandemic, 40 percent of young LGBTQ+ people have considered suicide in the last year; the numbers worsen to 52 percent in regards to transgender and nonbinary youth.

However, not all of the consequences of the pandemic have been negative for trans and nonbinary people, especially for those living on their own or in accepting households. Bobbi Reidinger, PhD, a professor of sociology at #Kent State University who teaches the course “Sociology of Gender,” explains why in an email. She writes, “Our gender is something that is inherently social. We have an understanding of gender because others around us have told us what is considered masculine or feminine (which society tells us are the only two options as we live in a world still dominated by the rhetoric surrounding a gender binary). We’re then rewarded socially for falling into those categories.”

That societal structure of expectations and rewards, as well as punishments for not falling into the accepted categories, has been completely dismantled by the pandemic. Reidinger continues, “Because our identities are reinforced by those around us, when we’re no longer around as many people, that reinforcement lessens if not disappears all together.”

First, according to the National Transgender Discrimination Survey, 63 percent of trans people have experienced serious acts of discrimination throughout their lives. Many of these forms of prejudice result from the affected individual’s interactions with others in public, such as “school bullying/harassment so bad the respondent had to drop out.” Additionally, there is frequent pressure to perform certain gender roles for protection from such injustices. As Griffin Wynne writes in an article for Cosmopolitan, “… sometimes you may choose your safety over your self-expression. You may opt for what’s easy over what’s authentic.”

However, when the pandemic shut down schools, workplaces and other public spaces, many trans and nonbinary people have felt safer in their day-to-day lives as the burden and threat posed by an unaccepting populace are removed. For example, Noah Gibbons-Shapiro of San Jose, California, who is nonbinary, had presented as masculine for about three years before the pandemic. Then, growing out their hair made them want to explore a more traditionally feminine style in the secure environment that social isolation provided.

“At home, I can make my gender and expression whatever I want it to be and define it however I want because it’s only for myself. Outside, I have to constantly be thinking about how others are perceiving my gender and what that means about my safety,” they say.

Ezra Silkes, a sophomore theatre design, technology and production major at Kent State who is also nonbinary, expresses a similar sentiment: “I wasn’t faced with choices like ‘what bathroom do I need to go into?’ I wasn’t faced with choices like introducing myself to new people with new pronouns. I didn’t have to come out to someone for, like, eight months straight … Gender itself fell by the wayside and gave me the ability to play with it more and present in ways I hadn’t done before.”

This introduces another benefit of quarantine: the unique opportunity to explore gender with more freedom and confidence than usual. In an article from them. titled “How Quarantine Can Help You Learn to Accept Your Body and Gender Identity”, Douglas Haldeman, PhD, clinical professor of psychology at John F. Kennedy University, describes that a break from the public eye can help people ignore the perceptions and standards of others and focus on discovering and practicing different presentations. He “suggests trying out a different way of connecting with yourself, ‘one in which this is not for presentation or how I might be read – this is just for me.’”

Gibbons-Shapiro and Silkes both did this and greatly enjoyed the experience, but it was also an opportunity taken advantage of by people who identified as cisgender before the pandemic and began to question their gender in the absence of societal pressures.

For example, Delia Brennan of Brecksville, Ohio, who uses she/they pronouns, viewed herself as a cisgender woman before the pandemic. She struggled with imposter syndrome when she did question her gender because many of her friends were going through similar processes. However, when quarantine began and she did not see those friends frequently, she “realized it was personal.”

“Lockdown allowed me to think about my gender and #gender expression in a way that felt completely comfortable for me and only me,” she says. “I was able to ponder who I wanted to be and how I wanted to express myself in a completely honest way.”

Quarantine also positively impacted her coming out, allowing for a quicker timeline and a more straightforward path to genuine self-expression for Brennan, who is now out as genderqueer and genderfluid.

This concept resonated so strongly with trans and nonbinary people that over a dozen responded to the call for interviews for this article. It would have been impossible to include them all, but every one reflected the same idea: Quarantine overwhelmingly improved relationships with gender for trans and nonbinary people who live in their own homes and in accepting households.

Reidinger expresses that all of this does not surprise her. She says that “when our social interactions lessen, as they have with the pandemic, it isn’t surprising that people begin to question things.”

Additionally, none of these positive changes have to stop when the pandemic ends. Haldeman recommends, “Everything you’re doing and everything you’re learning about yourself, you really should carry on after the period of social isolation,” an idea that is already on the minds of many of these individuals. Cecil Blue of Las Vegas, Nevada, who is nonbinary, always felt pressured to dress in a masculine manner and repress their traditionally feminine interests to pass as nonbinary in a way that was acceptable to cis people. However, quarantine changed that, and they don’t intend to go back to the way things were.

“Going into lockdown in March and having our entire society shut down and then reform into a strange new world where no one can see half my face reminded me that actually, people’s perception of me doesn’t matter!” they say. “Everything is fake. It can all be torn down and remade whenever.”