There is nothing more annoying than walking into a #gay bar and having no one notice you the entire night. It’s like, I didn’t just spend an entire hour cleaning the pizza sauce off my face, the I-just-watched-TV-for-10-hours sweat off my body, and maneuver hair wax that’s supposed to stick into place on the first application (never happens) to not get noticed! The worst is when I wear a tight v-neck –which everybody knows is the equivalent of a girl’s see-through halter-top– and nothing!

Wait, I’m supposed to be writing about summer and how great it was, aren’t I? Shit.

Well I hate that because I don’t have bleach white teeth and a set of pecs that protrude 5 inches from my body, I’ve suddenly become unnoticed at a gay bar on a late summer night. The ladies aren’t the only people who have to worry about body image. Gay men probably have it the worst when it comes to attracting a mate. Just hear me out before you start casting those judgement stones. You have two people who are turned on first and foremost by good looks—and then comes the need for this person to have a suitable personality. I’ve never once seen it practiced in the opposite manner, as much as some gays like to say they chase after a guy’s credentials before what’s between his legs.

I think the problem is that we try too hard. We think the only place to pick up a lover is the gay bar because that’s where there isn’t any huge hetero condemnation for being ourselves. While the latter is true, I’ve found that gay #bars house some of the most superficial gay men I’ve ever met in my life. We all get gussied up just for another gay to come over and buy us a drink—or at the very least give us a nice ass grab. It gives us a boost of self-confidence. But why in the hell does someone need a drink bought for him or his ass groped to gain a sense of self-worth? You just end up feeling like the worst piece of scum the next morning when the “I just got the attention because of my looks” thoughts start pouring in.

FYI: A gay bar isn’t the only place you can meet a person. I know we all want the organic meeting in the coffee house or grocery store, but let’s get real. Online dating is nice, but have you ever thought to join a club or group that shares your values or beliefs with the potential for other gays to attend? Or how about a gay-only sports team, dance or yoga class? They do exist, I promise. And they’re not filled with filthy whores who just want to get in your pants.

All I’m saying is that with the onset of a new semester, a new Fall season, a new job placement, a new school – whatever the new change might be, we should give a big “F*ck you!” to society’s constant pressure to look like “perfection.”  I’m not saying you shouldn’t practice healthy lifestyle choices, but we should stop acting like our looks are the most important thing in the world and the bar is the only place to meet a potential boyfriend. Besides, there is succulent wine to be shared, excellent TV dramas to be watched, and bellyaching laughs to be had with good friends.

(That reminds me– Once Upon a Time starts on September 30th, folks.) 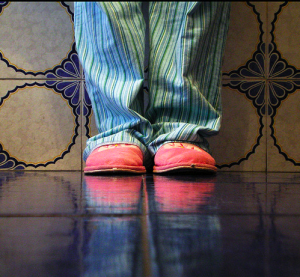 Stop worrying whether your pearly whites will get a guy’s attention tonight, and just remember that your extensive knowledge of pop culture with a tongue that spits witty fire will attract the person you really want to stay around. Like the great Etta James once said: I want a Sunday kind of Love—one that lasts past Saturday night.

Just remember this isn’t Disney though. You still need to brush your teeth, comb your hair and wear deodorant — no need to make the guy  across the table vomit in his mouth before you even speak.