#The New Normal  cast goes wireless and #unplugged as a way to return to what’s important: relaxing and enjoying family time. But they find that going without #Twitter, eBay bids and Angry Birds is harder than it looks — but one person who should definitely be banned from technology is the one and only Nana.

“If you follow #Rachel Maddow,
punch yourself in the hairy crotch”

Rocky and Nana actually bond over a lunch date, when they realize they have something in common: they’re both independent, strong-willed women with big life dreams. Rocky wants to someday move up from being #Bryan‘s assistant to produce TV shows with her own assistant. Nana wants to get her California real estate license (much less exciting and much more pointless — is there even a worthy housing market out west?) to give herself something to do until Goldie pops out the gay dad’s baby. 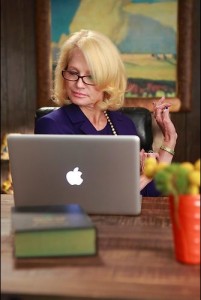 Rocky plays publicist and introduces Nana to the Internet (which Nana says is “for  pornmongers and people too rude to write a thank-you note”) and sets her  up with a Twitter account to someday get her real estate publicity started. But Nana uses Twitter to post hilariously ridiculous right-wing tweets like the one above about R.Maddow. Her insane posts attract hundreds of followers within hours. She then takes the bitch factor to another level by posting a personal (and extremely cheesy) music video that Bryan made to surprise David when they get married, which really gets the Twitter-verse talking…

“Do we all get bonnets?”

Meanwhile, at my dream house — I mean, David and Bryan’s home, where Goldie and Shania are bunking for nine months — the foursome goes without gadgets for an entire night. They plan to just cut out the phones and tablets to enjoy a quiet dinner, but Shania gets sassy and insists they go Amish: no electricity whatsoever. She even dons a pilgrim’s outfit and scoffs at the non-homemade candles the adults have lit. I love that Shania shows a little bit of the fierceness she inherited from her mama, and plays a sneaky hand to get her iPad back.

The following morning (or maybe two mornings later…The New Normal isn’t huge on keeping the progression of time in check) Shania wakes Goldie at dawn. She rambles about needing to grind the corn and darn the socks and heat the water for baths. Goldie, exhausted and fed up, returns the iPad and iPhone to Shania so she can get some sleep. I’m glad to see Shania isn’t being played as a totally oddball, wiser-than-her-years kid. She just wants her Angry Birds, after all. 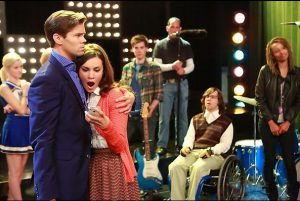 Bryan arrives at work on the set of a hit TV show that looks a lot like…. Glee. Photo credit: NBC.com

When Bryan sees his video has leaked on Twitter, and @NanaYourBusiness is the culprit, he explodes on the evil grandma. “If you can’t do the time, don’t record the crime!” Nana says, reminding me of something that should be said to any of the countless starlets who records sex tapes than act appalled when they appear on the Internet.

Bryan is further shocked the next day, when the cast and crew at a TV show set (filming a very Glee-like show called Sing, complete with cheerleaders and Rachel and Artie look-a-likes; nice one, Ryan Murphy) are viewing his embarrassing video. He immediately takes away all their phones, but then someone alerts him to the fact that Bryan-is-a-softie is trending. With the gushy music video leaked to thousands of Twitter users, Bryan is being painted as cuddly-wuddly and human — something he evidently wants. So he returns everyone’s phones and announces a retweet party: get that video out there! Bryan’s back-and-forth personality is funny and endearing, made more hilarious with his “Me! Me! Me!” ego. He remains to be my favorite character.

In the end, David saw the secret video on Twitter, and absolutely loved it. He said it reminded him how much he and Bryan are connected. I guess I keep forgetting the two aren’t married — I think they plan to wait until it’s relegalized in California? But regardless, this couple is one of the most lovable, loving and believable on TV right now.