The #New Normal celebrates a very un-normal #Thanksgiving this week. I know you have #turkey and cranberry cocktails calling your name, so I’ll try to keep this short. Happy Turkey Day!

“Vegetables are for the poor.”

The gang preps for Turkey Day, realizing they’ve had pretty shoddy past Thanksgivings. And we are treated with flashback scenes! Rocky recalls last year’s Turkey Day, a scene in which Nene Leaks plays Rocky and Rocky’s mom and dad. Rocky has long brown hair (not nearly as badass as her current bleach-blonde do) and she’s telling her #family about her new job as Bryan’s assistant. They scoff at the idea and say she’s not Hollywood material. Ah, nothing like having your dreams slashed by loved ones. Nene’s triple-role was a surprising choice by The New Normal directors, especially because she failed to make it funny. It also pushed the reality-boundaries a bit. I would’ve loved to see an aged Monique and Kevin Hart play mom and pop instead. 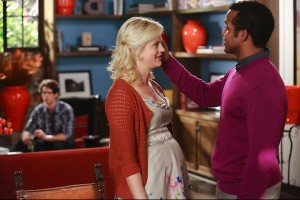 Goldie and Clint. When did this happen?
Photo credit: NBC.com

Bryan and David decide it’s time to make Thanksgiving about family, not just themselves, because a baby on the way means years of family-centric holidays. So the gang (AKA David, Bryan, Goldie, Shania and Rocky) plan a feast, even inviting Nana, Clay (Goldie’s ex-husband) and David’s estranged parents.

“We don’t want to kill them, we want to liberate them.”

Bryan and Shania travel to Ojai (which must be the farm country of California) to hand-pick an all-natural turkey to roast. But the hillbilly farmer tells them it’s their job to slaughter the turkey. So the pair decides to buy the lot of four turkeys instead of choosing one to kill. They ultimately make it their first vegetarian Thanksgiving when Shania refuses to eat any of them because she sees the “spirit” in them.

The New Normal takes another rocky course off the realistic storyline path when the guys are stuck with caring for four turkeys, which Bryan sets up in the backyards with food bowls and newspaper. I mostly love this show for its genuine portrayal of Bryan and David as a loving gay couple, but it stretches itself too far with this overly quirky turkey-saving scenario.

“We fight, then we fornicate.”

Things get awkward quickly when David’s divorced parents begin rounds of sharp-tongued spats the moment they arrive. It gets even more awkward when David walks in on them participating in some pre-turkey foreplay. Oops. He swiftly kicks them out, and the family dinner is reduced by two. 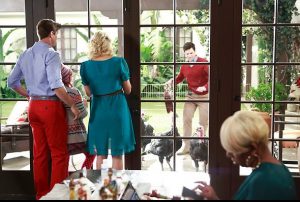 When Nana finds out the main dish is #tofurkey, she throws a hissy fit. Bryan finally stands up to the homophobic grandma and tells her to “shut your pumpkin pie hole!” Score 1 for Bryan, score -5 for Nana because she’s a Republican and gets kicked out of the dinner, too.

Pause for a  second — Goldie and Clint (Rocky’s cutie brother) have been going out? Did I miss this, or did we intentionally not know until this episode? Regardless, the two have gone on two dates, but Goldie is all tight-lipped about it because Clay is around. Right, because the man who cheated on his ex-wife multiple times shouldn’t have to bear the emotional burden that she has moved on. Not sure if I understand the line of thought there. To make things worse, Nana and Rocky hate that the pair are dating, and I have no idea why. Nice girl + nice guy = nice pair, or no?

One thing leads to another, and Clay and Clint get into a mini-brawl over Goldie, who then kicks out Clay, making him the fourth person to leave this quickly shrinking dinner party. Clint decides he should leave too, because even though he didn’t start the fight, he was still in it. Way to be overly gallant, man. Stay and eat the tofurkey — no one left here hates you!

Not surprisingly, the final five dinnermates all hate the tofurkey, so they order pizza instead. After all that hooplah, we get a predictable ending, made more cliche by the final snippet scene. Goldie is left to care for the four turkeys when Shania goes to school, and she is just so flustered! For real, the family is going to keep four turkeys as pets? Come on, New Normal. Don’t lose me now.

In honor of #Sex Week here at #Kent State, I thought I’d share a few pointers that you may or may not be familiar…