On Monday, Jaiowyn Robinson of Franklin Township in southeast Ohio, appealed a decision to deny her food assistance. The county denied her assistance because they refuse to accept that she’s female.

The next day, Robinson addressed the Warren County Board of Commissioners, imploring them to stop supporting healthcare #discrimination against trans people. Last month, the all-Republican board directed the county’s healthcare plan to exclude medically necessary transition-related care. As local coverage noted, this appears to violate the Affordable Care Act.

A Matter of Equal Humanity

The commissioners claimed the issue is a matter of federal overreach. Commissioner David Young said, “I’m not making a moral judgment here. If someone wants to do that [gender confirmation surgery], that is between them and God. It’s just not something I think taxpayers should be paying for.” 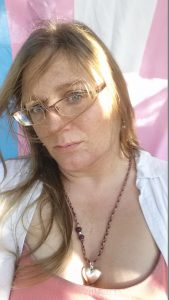 After Robinson’s presentation, Young continued claiming the issue isn’t about transphobia, but about “federal overreach.”

“Federal overreach” is the same argument conservatives have used to oppose marriage equality. It wasn’t compelling for Robinson.

“Maybe someone needs to tell you to treat people like a f—ing human being,” she replied.

The Low Costs of Transition-Related Care

Fiscally speaking, transition-related care is not expensive. A 2013 Williams Institute study found that 85 percent of trans-inclusive health plans did not see increased premium costs by adding transition coverage. As the Daily Beast details, transition-related care does not pose a substantial cost to insurance providers or employers, mostly because few people use it.

Though the costs to taxpayers and insurance companies are low, the benefits of transition-related care for trans people can literally save lives. This point was not lost on Ms. Robinson. She wrote a heartfelt letter to the Board of Commissioners, which mentioned the death of Leelah Alcorn, a teenage trans girl who lived in the area. In 2014, Alcorn killed herself by stepping in front of a semi-truck. She left a note explaining that she committed #suicide because of transphobia and rejection from her family.

“I write to you not as an employee or laborer for the county, but as a citizen oppressed by it. I was born and raised here in this wasteland; I know the call of the metal beasts running the railroads in Franklin, offering the same escape the trucks Leelah heard from her safe place in the woods near I-71. I come to you bearing witness. I also come with intent to open discussion and offer education from my unique insight into these issues, from the perspective of the afflicted.

According to the most recent poll from the Williams Institute this year puts the #transgender population at a mere 0.45 percent of the population. This makes the rate of intersex births one in 150. I’m guessing you have 2000 employees and a family rate of 2.5 children on average, meaning 5000 people potentially affected. That is 33 human beings you’re potentially denying medically necessary care for; a sharp contrast to your neighbors in Hamilton County who are taking the unbiased approach.

Recent statements by professional associations, such as the American Medical Association and the American Psychological Association, explain that treatment of gender dysphoria is a medical necessity and coverage should be included in health benefit plans. This spurred inclusion in the final regulations of the Affordable Care Act. The rule also applies to insurance plans purchased directly through an insurance carrier or an employer-sponsored health insurance plan, when any part of the insurance carrier receives federal financial assistance. For example, since Aetna sells insurance plans through state health exchanges, it receives federal financial assistance in the form of premium subsidies. This means that discrimination is prohibited in any other insurance product that Aetna sells; this would be the same for United Health who just lost a lawsuit over this very issue in Texas.

Perhaps instead of asking for removal of coverage, you should retract that statement and merely demand it at the first of the year when the ACA regulations go into effect, costing you nothing.

The cost of providing everyone with transition care is less than 0.03 percent of overall Medicaid expenses. Plus, that’s before you realize that less than half of gender variant people ever require this degree of medical intervention. And due to the low number of people needing the treatment, the minimal cost of coverage is dwarfed by the savings when they are accessed.

Two thirds of Fortune 500 companies attribute inclusive policy to their success and base their areas of location on its ability to retain that diverse workforce. States counties and cities, which have passed inclusive laws here in Ohio, cite that it has saved them money, in addition to making money through the tourism benefits of being a welcoming area. They find it’s cost reductive, beneficial and equitable when compared to the lifetime of therapy and treatment of mental health disorders that arise from lack of treatment, which affects trans people’s ability to fully participate in society. Relying on public services furthers your overall systemic loss accrued by denying these benefits.

[Gender dysphoria is] a medical condition cured through a timely hormone regimen and a onetime surgical cost. Correcting what is, in reality, a spectrum of genetic variations and endocrine disorders, not “lifestyle choices.”

Has anyone considered the county workers’ children, who are also directly denied care while ironically, having the premier care facility for treatment and well-being of trans youth in Children’s Hospital, just down the road? We can strip trans kids like Leelah of the care they need with a political stone thrown in their waiting graves, but god forbid we outlaw dangerous conversion therapy known by every medical and psychiatric entity in America as causing direct harm that’s guaranteed to kill them?”

After its many advertisements that proclaimed “coming out on March 16th”, the explicitly gay marketing for Love, Simon has raised the hopes of many…