For years, minority groups have longed for a doll version of themselves for representation in society. Barbie has a variety of careers, and friends of color, however there was no known doll that represented trans individuals. Until now, that is, thanks to a teen named Jazz Jennings.

According to a Williams Institute report, nearly 150,000 teenagers are transgender. At just 16, her memoir “Being Jazz: My Life as a (Transgender) Teen” debuted in October. Jennings uses her platform on YouTube to raise awareness for transgender rights, especially rights for trans youths.

Jennings’ doll debuted during the weekend of New York’s Toy Fair, Saturday Feb. 18 – Tuesday Feb. 21. The Tonner Doll Co. developed the doll; the company’s founder, Robert Tonner designed and created the doll himself. Tonner stated how much he admires Jennings,

“Jazz stands for everything I respect from a human nature point of view,’Tonner stated. “She’s incredibly brave, intelligent, warmhearted and creative.” 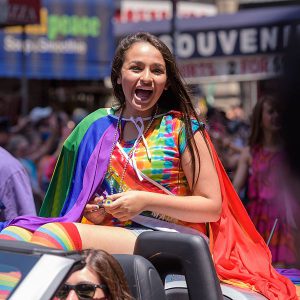 While the company usually markets towards adult collectors, this particular doll of Jennings is geared toward children, and intended to give transgender youths representation.

The dolls are currently not available but, “will be available for purchase in July,” according to CNN.

Tonner ensures the doll will come with an outfit from the cover of Jennings’ memoir. The outfit will consist of a pink shirt and jean shorts. Currently the doll’s all white outfit consists of ballerina apparel.

Jennings has appeared on media outlets including “60 Minutes” and the documentary, “I am Jazz: A Family in Transition,” on the Oprah Winfrey Network. This exposure has helped Jennings become an advocate and spokesperson for transgender rights, using social media to connect with fans, according to a CNN article.

In an Instagram post, Jennings stated, “The doll is considered to be the first ‘transgender’ doll because it’s based on an individual who is trans. Of course it is still just a regular girl doll because that’s exactly what I am: a regular girl!”

Calling herself a “paranormal fantasy author,” Maggie Stiefvater is well-known for her young adult novels. Her most popular works are the four-part series, “The…