On Wednesday, #Kent’s City Council held a special meeting where they unanimously voted to pass a proposed nondiscrimination ordinance for the city.

The vote makes Kent the 19th city in Ohio to prohibit unequal treatment of #LGBTQ people in employment, housing and public accommodations.

In April, the council added LGBTQ people to the city’s nondiscrimination laws for employment and housing, but the city code’s lacked a plan for penalizing violations of the laws. The ordinance passed on Wednesday created a plan for such penalties.

“Any lodging house, restaurant, eating house, barbershop, public conveyance by air, land or water, theater, store, or other place for the sale of merchandise or food products, or any other place of public accommodation or amusement where the accommodation, advantages, facilities, or privileges thereof are available to the public.”

On July 19, the council held a regular meeting where they voted on the ordinance for the first time, but an insufficient number of “yes” votes, due to two absences and one abstaining vote by Councilman John Kuhar, led to the ordinance being delayed until the special council meeting was called to vote on bond issues.

At the initial meeting, following the lack of movement on the ordinance, organizers from Equality Ohio, Northeast Ohio Indivisible and the local Democratic Socialists of America group stood in silent protest and left the building before the meeting had ended. The groups are all part of the coalition Kent 4 Equality.

John Hess, co-founder of the Portage County branch of the Democratic Socialists of America, was in attendance at both City Council meetings and joined others in the walk-out.

“I think it had its desired effect,” Hess said. “It not only passed, but passed unanimously. So, I think that tactic was used well.” 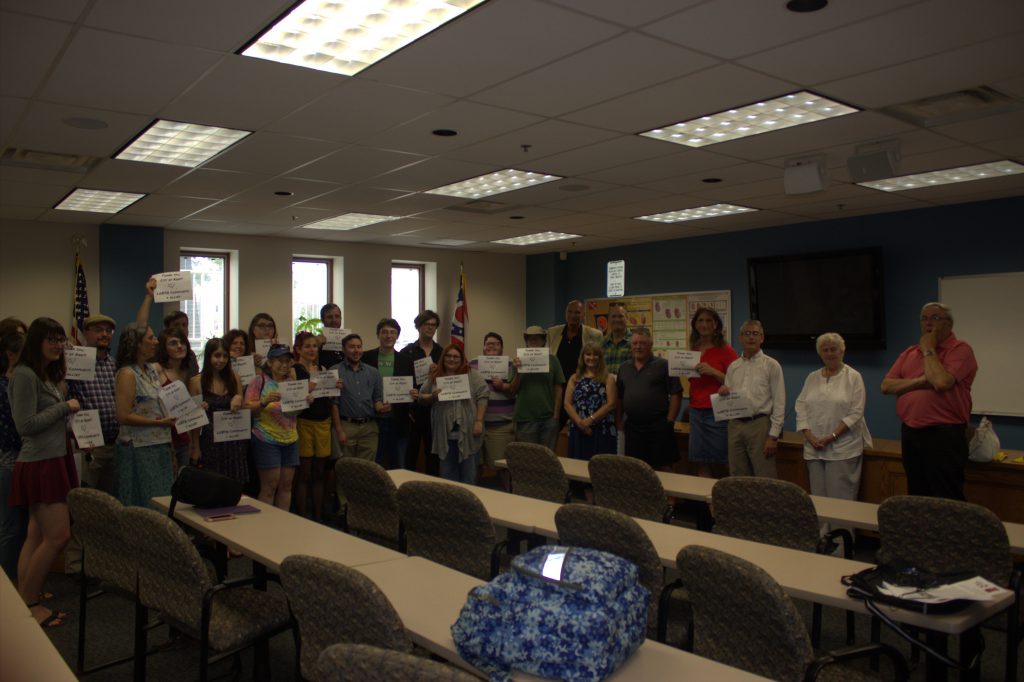 “Are you a good person?” Councilman Roger Sidoti said, explaining his choice to vote for the ordinance to pass. “You should be afforded the opportunity to demonstrate that under the laws of our country. You deserve all those things.”

After the meeting adjourned, Sidoti spoke to the attendees at large and praised their investment in the ordinance and effort towards getting it passed.

“I am thrilled,” Hess said. “It’s good to have a win, just to break up the monotony of defeat. It’s refreshing. And, it’s gonna take a lot more of these if the world is gonna get even remotely better.”

Violation of the ordinance will lead to mediation by the city prosecutor in an attempt to reconcile the complaint. If no reconciliation can be made, the penalty could be a fine or jail time.

Along with the ordinance, council also passed ordinances to put a vote towards making Kent a sanctuary city and constructing a health and wellness center on the ballot.

In honor of #Sex Week here at #Kent State, I thought I’d share a few pointers that you may or may not be familiar…