#Trans*Fusion and Pride honored #Transgender Day of Remembrance Thursday night in White Hall with a memorial and #vigil service.

Transgender Day of Remembrance (TDoR) is a nationally observed day to memorialize members of the transgender community lost to anti-trans violence. Traditionally observed on November 20th, TDoR was initiated in the late 1990s as response to the murder of Rita Hester, a transgender black woman.

This year Kent students honored the lives of 27 individuals who were victims of anti-trans violence, only two fewer than the previous years. 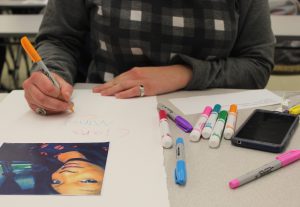 Senior business management major Moira Ledinsky creates a colorful poster to honor Ciara Minaj Carter Frazier in White Hall on Nov. 29, 2018. Ledinsky is on the PRIDE!Kent board serving as social media manager. The organization collaborated with Trans*Fusion for putting on the event. Once done with the posters, a powerpoint was shown and everyone recited the names of the victims on the poster. Photo by Anu Sharma.

The event began with opening remarks from McGirr followed by a presentation honoring the 27 individuals which included two Cleveland natives, Kiesha Wells and Phylicia Mitchell. The group also gave recognition to the transgender individuals who were not on the list, including global victims as well as those who may have been misgendered or misrepresented.

“A lot of murders go unreported by the media, police, the morgue, even family sometimes,” McGirr said. “Their trans-identity is swept under the rug and reported as their birth identity.”

It was also noted that transgender women of color made up the majority of the victims, a violent trend that has remained since the creation of TDoR, 19 years ago and most likely longer.

Jordin Manning, a junior psychology student at Kent, attended the event and spoke to the importance of honoring the lives of trans people lost to violence.

“[TDoR] is a very important day that many trans people do not get to have, murders are reported under wrong names or under wraps,” Manning said. “The societal and systematic write off of #LGBTQ people statistically make people see them as not significant.” 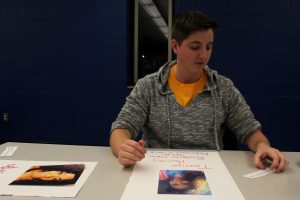 Senior Geology major Emerson Pelton makes a poster to honor and celebrate Tonya Harvey for the Trans Day of Remembrance and Vigil in White Hall on Nov. 29, 2018. The president of Trans*Fusion, Aaron Kessler, said they wanted to implement more of a healing activity along with mourning the trans victims. Photo by Anu Sharma.

Students then participated in creating posters for each individual, which were presented during the candlelight vigil. A garland of blue, pink and white flowers meant to represent the names of the 27 victims was constructed by members of Pride and presented at the vigil.

McGirr said that the event was an opportunity to commemorate the individuals lost, so that they would not be forgotten.

“The point is not necessarily to mourn, but also to celebrate lives,” McGirr said.

As for the future of Transgender Day of Remembrance, McGirr hopes there won’t be a need for another.

On May 9, Attorney General Loretta Lynch delivered a widely-praised and well-crafted speech, weighing in on controversy over North Carolina’s Public Facilities Privacy &…