Wednesday marked the grand reopening of the #LGBTQ Center in the lower level of the Kent Student Center. The celebratory reception, held in the new, larger space, was well-attended by students and faculty. 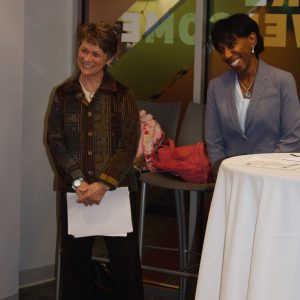 Rue Monroe, a sophomore who has been coming to the Center since the fall of 2015, also spoke. For them, the updated space shows how Kent’s LGBTQ community has grown.

“I remember coming down here and it was just a box; I remember so many people just filling into this box,” they said. “It was really nice and welcoming, but now we actually have a space where we can just relax, and communicate and talk with each other.”

The larger space creates a more open, comfortable atmosphere for students who spend time in the Center. Before the renovation, the Center had only one small office and students congregated at tables outside the office door. 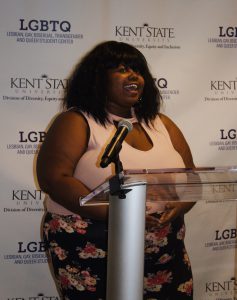 “I feel like I can come here and feel comfortable with myself rather than feeling so secretive and being in a box, [feeling] like ‘I can’t talk too much, everyone else is out there,’” Monroe added. “I always felt like I had to keep a secret of who I am, but now I’m in a space and it feels like I have more freedom.”

Ditlevson agrees that having a private space is essential for LGBTQ students.

“Privacy is important,” he said. “When people are sharing personal pieces of their identity, or trying to sort those pieces out, they really deserve privacy. In the past we haven’t been able to do that. People would come to me and talk about questioning their gender identity or their sexual orientation, and they’re sharing that in a lounge space where other people are in earshot. That’s just not respectful.” 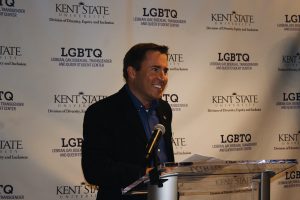 According to Ditlevson, the space has grown from 130 square feet in 2015 to over 1,700 square feet currently. Both the size and the purpose of the space have changed; in 2010, the offices provided limited space for the Center for Student Involvement.

The renovation was partially funded by the Kent Student Center, which covered construction costs. The Division of Diversity, Equity & Inclusion furnished the space.

On July 28, northeast Ohio’s #LGBTQ community was disappointed by the unexpected announcement that this year’s Cleveland pride event was cancelled. Todd Saporito, CEO…