With the sudden surge of #LGBTQ representation in film this past year, including In a Heartbeat and Call Me by Your Name, filmmakers are feeling more and more encouraged to reflect diversity in their own productions.

A group of #Kent State undergraduate students has wrapped up a short film featuring a #gay main character. The project Pop! follows a thirteen-year-old boy named Ty as he faces obstacles like a bully and an alcoholic father.

Ben Kemper is a sophomore digital media production major, with a concentration in digital film. Filming has been his passion since middle school and he is excited to introduce Ty and his story to the screen as writer and director of Pop!.

“I just wanted to write a movie about a kid and everything he goes through as he’s growing up, and this was kind of the first time I had an actual budget and an actual crew,” Kemper said. 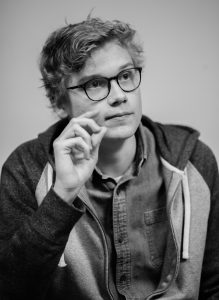 Ben Kemper wrote and directed Pop! as a sophomore. Photo by Cameron Croston.

Since the majority of the cast were adolescent actors, senior digital media production major and producer of Pop! Zoe Logston recalls pressure during the making of the film. Aside from managing and coordinating filming days with everyone’s schedule, she remembered her concern that LGBTQ discrimination in the script could lead to harassment on set.

“It was a sensitive topic so I was worried going in that there would be issues, or just somebody taking things that are in the script because we use a couple slurs with the bully. I was worried that on those days there would be crew members who would think that it was okay to say those things,” Logston said. “But every time I was blown away, everyone was professional about it, even our kid actors were very good about it.”

Finding an actor to play Ty was no easy task, according to senior electronic media production major Brooke Honkonen, the production manager and casting director of Pop!. The audition process was long and tedious, but eventually, the team found Harrison, a fourteen-year-old boy who was originally cast as the bully.

“He’s not a bully at all, he’s like a super sweet kid,” Honkonen said. “We got to know Harrison more because he was around set, and we realized that he really is the character Ty. He’s like this kid that you want to get to know, like you want to be his friend. I really think he brought his character to life and gave us a lot of insight being a fourteen-year-old boy playing a character who is gay, and he has a lot of opinions about it and really loves the role.”

While Ty identifies as gay in the film, the team emphasizes that the way his sexual orientation is portrayed is subtle and not the focus of the plot. Noting that Ty does not act stereotypically “flamboyant”, Kemper states that Pop! resembles the movie Boyhood more than it does Moonlight, in that its focus is a coming-of-age story where Ty is “not a gay main character but a character who happens to be gay.”

“You can tell it’s this kid who is just trying to grow up and have a normal and fun childhood, and then these people keep making that his title,” Logston said.

Logston points out that Ty himself never brings up being gay, and sees it as just another trait instead of his entire identity.

“It’s like hitting on that really relatable moment where someone takes one thing about you in any bullying situation and makes that your character, who you are,” Logston said.

According to Kemper, the reason for this type of representation is to show that despite society’s more accepting attitude towards the LGBTQ community, people often paint someone’s LGBTQ identity as the center of their personality when they are more than their sexuality. Pop! depicts this in characters who interact with Ty, and it is seen as overreaching and ineffective.

“Anytime another character brings it up and tries to use it as a negative against him it never holds water. It doesn’t in real life so it doesn’t in the movie either,” Kemper said.

All being passionate about film, the team agree that LGBTQ characters are becoming more visible in media, and that this is a positive influence for moviegoers.

“A lot of kids when they first start to discover that they feel differently than their friend, it’s like this weird moment where you feel like you don’t belong, like you can’t tell anybody, and there’s not people like you,” Logston said. “I feel like it’s always easier for a kid to go watch a movie and be like ‘oh these people have the same feelings I do’ and it just makes the whole process of finding yourself a lot easier and it makes accepting yourself a lot easier.”

The creators are satisfied with the finished product. Kemper, Logston, and Honkonen are grateful for the cooperation of the cast and crew.

“Watching the finished film just made me really happy, it’s basically exactly what I had in mind,” Kemper said. “Without every single person that was on the crew it wouldn’t be the way that it is, so I’m really thankful that we got the crew that we did.”

Pop! has had a crew screening and was submitted to ten different film festivals nationwide. The team is still waiting to hear from seven, and if it is not chosen at any location Kemper will premiere the production at Kent State for student and public viewing.

A few weeks ago, the United Methodist Church (UMC), one of the largest denominations in the U.S., ended the church trial case involving Bishop…