O’Rourke’s speech was highly focused on minorities and disadvantaged groups in the U.S., and  demanded that we fulfill our promise of all people being created equal, right now.

Among the groups mentioned was the #LGBTQ+ community. “Some people in this country, in some states, can be legally fired for their sexual orientation,” he said. He continued to list the injustices. “In Texas, by law you can be too gay to adopt a child out of child protective services. It’s true, by law that is okay, although it is not right, in this country.”

Admitting that our the LGBTQ+ community still faces challenges in the U.S., O’Rourke declared a promise.

“For the members of the LGBTQ community, I will sign into law the Equality Act,” he said. 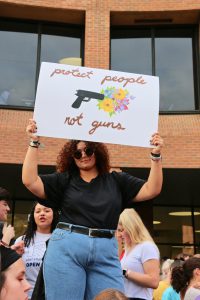 Women, people of color, displaced blue collar workers, mass shooting victims and more were also mentioned in O’Rourke’s speech. Diversity was key; he made it loud and clear that any challenge we face as a country, must be solved together.

O’Rourke has gained a lot of media coverage since his now infamous call of: “Hell yes, we’re going to buy back every AR-15 and AK-47 in this country.” He sees this as just one step to ending mass shootings in places like Dayton, OH, where he held a town hall Tuesday.

As such, gun violence was another major topic of the speech. O’Rourke did not shy away from the issue saying that mass shootings in our country “have become so mind numbingly common, that they don’t even make the headlines.”

O’Rourke explained his plan of action for bringing an end to this epidemic– one that includes universal background checks, red flag laws and the end of the sale of automatic weapons. A plan that O’Rourke believes will be fueled by the passion and drive of young people.

“I believe in you. I know that you are going to force this to happen,” he said. “Any significant change that we have ever seen in this country has been purchased with the service and sacrifice of young people.”

Kent State is approaching the 50th anniversary of May 4, 1970, where the Ohio National Guard opened fire on students. That day, four students were killed and nine were injured, an event that Kent State has since memorialized and continues to educate students on. O’Rourke shared his meeting with a survivor, Alan Canfora, comparing him to many other revolutionary young people throughout history that have inspired change in our country.

“It is going to be the very youngest among us who make sure that we meet this challenge. Not with half steps, or half measures. Or only half the country. It will not be Democrats or Republicans or Independents. It has to be all of us in America. And it has to be led by the young people of this country that will make sure that it happens.”

No, I’m not referring to the Vaseline or wet wipes stored behind your bed. Nor am I talking about the mass amounts of extra…