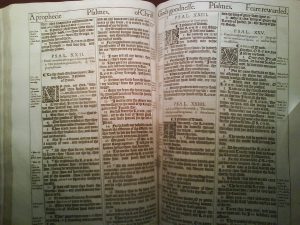 We’ve all seen the #King James translation of the Bible, correct? #King James VI of Scotland and I of England had commissioned 47 scholars to translate the Bible from the previous two versions, the Great Bible, and the Bishop’s Bible, so as to respond to the perceived problems detected by the Puritans. King James made clear instructions that the scholars were to conform to the ideas of an ordained clergy within the text itself.  King James Version is still widely used today, and the translation of the Bible helped the king keep peace with the church.

What you don’t know is that King James was a raging queen, himself.

Many biographers have claimed that King James had many homosexual affairs in his lifetime. His first was with his cousin, Esmé Stewart. King James became infatuated with Stewart enough to dub him 1st Earl of Lennox. Shortly after their relationship had ended, King James took a fancy to a poor Scotsman named Robert Carr. Carr had injured himself during a tilting match, at which match the king was present, and instantly King James took Carr under his wing, teaching him Latin as he nursed him back to health. Eventually Robert Carr was to be knighted and to become one of the king’s favourites.  After Robert Carr ended the relationship with the king, George Villiers, the 1st Duke of Buckingham came along. During a restoration of Apethorpe Hall, which was a country home to the royal family, it was discovered that there was a passage connecting the bedrooms of King James and Villiers. It was rumored that James had favorite male lovers, and at the top of the list came Villiers.

While all of these relationships were relatively public (a secretary of Robert Carr had even outlined the king’s behavior in his personal letters) there are still some historians who do not believe King James VI of #Scotland and I of #England was, in fact, a homosexual. King James was married to Anne of Denmark, and during their marriage she gave birth to seven children (not to mention the two stillbirths and the two or three miscarriages). King James also listed sodomy among other punishable crimes.

During his final years, King James VI and I suffered from kidney stones, arthritis, and even a stroke. And despite everything, he eventually died of dysentery with the Duke of Buckingham at his bedside. After his death, and despite all of his flaws as a ruler, King James was widely mourned. He had kept the respect of his people during his reign, and died a beloved king despite being an adulterer and a sodomite.

Do you feel enlightened after this history lesson? King James believed that sodomy was a fundamental sin, but he excused his own behavior (let alone that of his lovers) because he believed himself to be ordained by God. See the problem? King James made a huge mark on history by hiring those scholars to translate the Bible. What I find personally hilarious is that my own family has condemned homosexuals using passages of a translation that were commissioned by an actual sodomite.  Why, then, is it such an issue that some people distrust some passages of the Bible? If King James can insure that his own beliefs in an ordained clergy are included in his translation, who’s to say that he didn’t add anything else?

Shelves, cases and tables of brightly-colored rocks and the sound of soft flute music fill the inside of Momma’s Rocks.  Married co-owners Melanie Hawkins and…