Amanda Leu, who runs Spectrum’s Facebook page and works as the College of Communications and Information Diversity Coordinator, commended the decision. She worked in a committee of faculty and staff members who discussed the policy improvements with university administrators.

“This has been an ongoing process for a few years and we are very excited to finally have trans-inclusive healthcare policies at the university,” Leu wrote in an email to Fusion.

The committee has not yet seen the specific details of the policy change, Leu added. “However, any trans-inclusive policy changes are a huge step in the right direction. Previously, there were specific exclusions listed in the faculty/staff healthcare policies that said that any procedures related to ‘transsexualism’ were not covered under any of the healthcare plan options.”

When faculty and staff members shared their own personal stories about accessing trans healthcare, that “really helped put things into perspective for the administration,” wrote Leu. “For me personally, I have been trying to get top surgery for over a year and I was never able to get it approved with the old health insurance policies. I tried a few different things, but I was denied every time. I am very excited to take advantage of the new coverage at the beginning of the year, and again, I am really looking forward to seeing the actual policies once they are released.”

Erica Pelz, another member of the committee which advocated for the healthcare policy, agreed. Pelz, the Facilities Mechanical Systems Specialist for Laboratories, said she believes putting a human face to the issue helped demonstrate its importance. 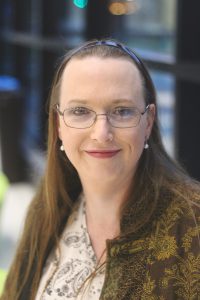 “I think what really got the ball rolling was that I was willing to stand up and be counted, to say, look, this [lack of coverage] affects real people in a negative way and I’m one of them.”

Although Pelz may personally benefit from the healthcare access, she said her motivation was to give back to the trans community and to help others.

On Friday, Pelz received the news in the email from Vice President for Human Resources Witt, and she was overjoyed.

“I was in ISB [Integrated Science Building] and I let out a ‘woohoo’ that echoed down the hallway,” she said. “I hope I didn’t disturb anybody’s class but I was just so, so overwhelmingly happy that it had happened.”