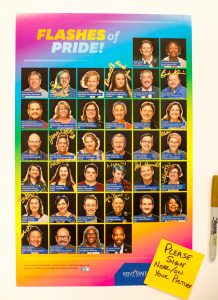 The new Flashes of Pride poster revealed Tuesday at the #LGBTQ center.

#Kent State students, faculty and staff gathered Tuesday for the celebration of the third annual Flashes of Pride poster reveal.

Ken Ditlevson, director at the LGBTQ center, spoke at the revealing. “I am proud of the 36 faculty, staff and students,” Ditlevson said, “who took the bold move to be a participant on the poster.”

The Flashes of Pride project intends to help students understand they are part of a community and that they aren’t alone. “Our goal is to show visibility,” said Ditlevson, “and being gay isn’t something you can see.”

Ditlevson said he was proud of the Kent State community, which he said has been supportive and accepting of diversity. “Unfortunately we don’t see [acceptance] everywhere,” he said referencing the backlash the Cleveland State University’s LGBTQ center received.

Students choose to get involved with the poster and are often seen as brave individuals.

“I [thought] this was a great opportunity for visibility, which helps our cause,” said Danielle Martin-Jensen, “People tend to be more open when they know people in a minority community.”

Martin-Jensen, a Kent State graduate student, said she hoped that people would see her on the poster and think differently about the community. Martin-Jensen also discussed how she felt about last year’s reveal saying that it put a smile on her face, this inspired her to participate. 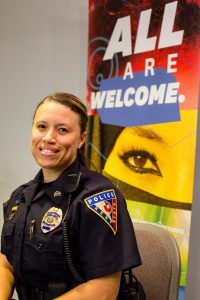 “I feel like [being on the poster] helps show representation,” said Aleks Bruno, a sophomore fashion design student, “helping people feel like they aren’t alone.”

Kent State Police officer, Sgt. Michquel Penn agrees. She explained that she participated in the Flashes of Pride project because she wanted LGBTQ students to feel comfortable with her. She said her role as an ally increased when she saw what her sister went through when she came out.

“To know I could have been there for her more; to have stood up for her more,” said Penn, “I felt terrible.”

If you think #Summer 2012 was just another season of meaningless men’s fashion, think again. It’s the neon-colored tank tops and the Crayola themed…