The 2016 Summer Olympics in Rio de Janeiro feature record-breaking numbers of openly #LGBTQ competitors. The Advocate lists 48 LGBTQ athletes who are competing, most of whom are female. Two anonymous transgender Olympians have been mentioned and Chris Mosier made headlines as the first openly trans member of Team USA. Although his sport, the duathlon, isn’t part of the Rio Games, Mosier has recently gained national publicity, including an advertisement with Nike.

From Jesse Owens to Billie Jean King to Chris Mosier, sporting events act as a stage, magnifying the scope of social justice issues. While record numbers of LGBTQ people compete in this year’s Olympics, questions remain: How many fear coming out due to prejudice and violence? What challenges do gay and trans athletes still face? Are nations truly progressing towards #LGBTQ equality? 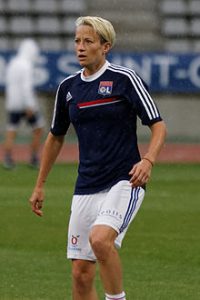 Concerns about anti-LGBTQ prejudice also arose two years ago during the 2014 Winter Olympics in Sochi, Russia. Many gay rights organizations and activists opposed Russia hosting the games, due to Vladimir Putin’s homophobic policies, such as outlawing youth access to gay media content.

Brazil’s frightening frequency of hate-motivated crime is also troubling. Contextually speaking, the nation’s general homicide rate is extremely high, but violence against LGBTQ Brazilians has increased since the legalization of same-sex marriage in 2013. An advocacy non-profit, Grupo Gay de Bahia reports that an LGBTQ person is killed in Brazil every 27 hours on average.

The Olympics represent a great deal: Global solidarity, the excitement and glory of athletic achievement, and a chance to reflect upon social progress. During the last Olympic Games, gay couples couldn’t marry in the state of Ohio. As spectators across the globe witness LGBTQ inclusion, hopefully in two years, gay and trans American Olympians won’t return to states where they can legally be fired and evicted just for being who they are. As the 2016 Games demonstrate, progress can be slow, but it’s happening.

In April of 2012 I was forced to resign as my son’s Boy Scout Den Leader because I am gay. In response, I launched…