Philadelphia unveiled a new version of the Pride flag which includes two additional stripes on June 8 for celebrating Pride month. The new flag is meant to represent non-white individuals in the #LGBTQ community. This has sparked debate within the community; some people support adding the two stripes and others oppose it. 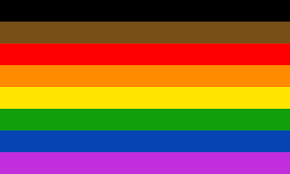 However, queer people of color often feel ignored in the community, despite the fact that the #LGBTQ rights movement was sparked by queer women of color. Also, LGBTQ people of color are more likely to face violence and #discrimination than their white counterparts. For example, many queer people of color were massacred during the tragic Orlando Pulse shooting in June 2016. Another example is the failure to indict the officer who killed Philando Castile. Last month, protesters at the Columbus Pride parade were arrested after a demonstration to raise awareness of police violence against people of color and within the LGBTQ community.

Additionally, the Human Rights Campaign states that “Black #transgender women face the highest levels of fatal violence within the LGBTQ community and are less likely to turn to police for help for fear of revictimization by law enforcement personnel.”

Marsha “Pay it no Mind” Johnson was a trans woman of color who stood up for LGBTQ rights at the Stonewall riots. According to Out History “The Stonewall Riots had become the spark that ignited transgender rights and activism through the efforts of Marsha P. Johnson and other fellow activists and supporters.” Johnson, along with other queer women of color such as Miss Major and Sylvia Rivera, helped pave the way for LGBTQ rights.

The flag that Philadelphia introduced is symbolic to queer people of color, it makes them feel more included and less ignored. It also offers a new perspective to their marginalization or isolation.

Anna Saez, a 2017 #Kent State graduate, wrote on social media that the flag makes her feel more included as a queer woman of color.

“You know, I shouldn’t be saying this publicly but this flag makes me feel like I belong. I pride myself on my Cuban heritage so much that a flag like this makes me feel like I belong to something for once. And being a mixed individual and being a woman who’s bisexual, I’m constantly told I’m nothing (I’ve had a couple people tell me how white I am and it honestly hurts). So, I appreciate this flag more than what people realize.”

For the fifth time since 2011, Democratic state Sen. Nickie Antonio of Lakewood has introduced the Ohio Fairness Act.  The Act would provide protection…