#LGBTQ history is rarely taught in schools. Without knowing what the community has already fought through, it can be hard to see the extent of progress or to contextualize the modern state of LGBTQ rights. This outline of LGBTQ history intersperses photos from the present day, in order to highlight the contrasts between “then” and “now.”

The first documented raid on a gay bathhouse took place in February of 1903, according to Sexual Deviance and Society: A Sociological Examination. There were 26 men arrested and seven were imprisoned on sodomy charges for up to 20 years. Bathhouses were popular among gay men prior to the AIDS crisis, but the popularity of these places decreased when the crisis began.

In 1924, Henry Gerber founded in Chicago the first gay rights group, The Society for Human Rights. Gerber had been institutionalized for his sexuality seven years earlier. The group was disbanded a few years later when several members were arrested. The Society for Human Rights published the first American LGBT newsletter called Friendship and Freedom. At the time, laws forbade the dissemination of this material, similar to how Russian laws forbid it today. 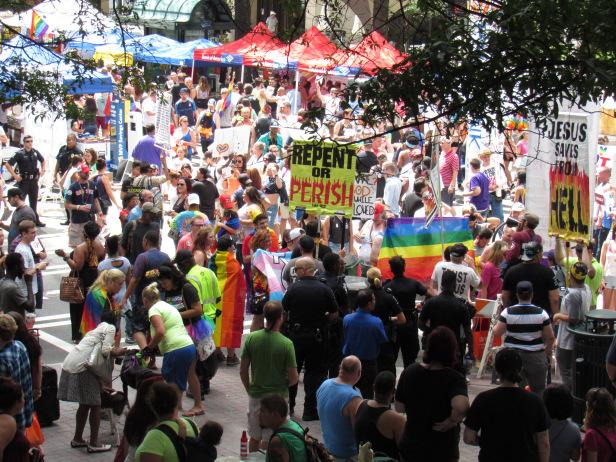 Three decades later, Phyllis Lyon and Del Martin, a couple in San Francisco, founded the first lesbian group, the Daughters of Bilitis. The Daughters of Bilitis were loosely affiliated with the feminist movement due to cross-membership, but feminist leaders called lesbian supporters a “Lavender Menace” in 1969, leading to a backlash and a separate feminist movement based on Women-Identified Women, the “founding document” of lesbian feminism. Lyon and Martin were also the first gay couple to be married in San Francisco, just a few months before Martin died.

A woman wears pins representing the bisexual flag and the United States during Charlotte Pride, 2016.

Although the 1969 Stonewall riots are generally considered the start of the modern LGBTQ rights movement, the Compton’s Cafeteria riot in 1966 was a strong example of backlash against the oppression of the LGBT community. A transgender woman started that protest as well, when a police officer in the Tenderloin district of San Francisco tried to arrest her for “crossdressing.”

A year after Compton’s Cafeteria, another raid, of the Black Cat Tavern, a Los Angeles gay bar, erupted into chaos. Following that raid, an LGBT publication began, called The Los Angeles Advocate. This eventually became The Advocate, still in operation today. 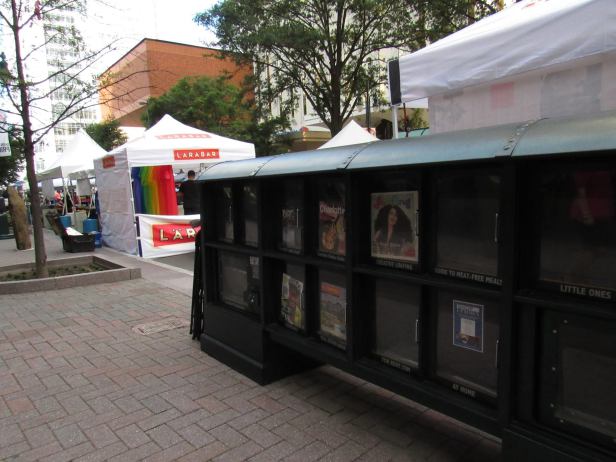 The Stonewall riots took place in New York in 1969. Police raided the Stonewall Inn, a popular gay bar owned by the mafia. The bar was the subject of constant raids, but this raid in particular ended with pushback from occupants. 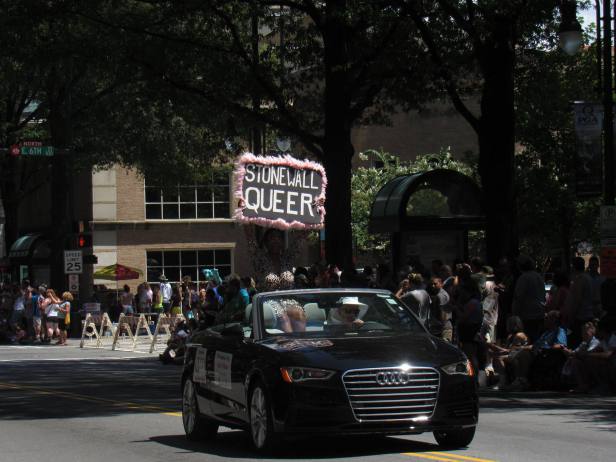 Annual reminders were yearly pickets on the 4th of July at Independence Hall in Philadelphia as a reminder that the LGBT community still did not have freedoms in the U.S. The reminders were discontinued and replaced with Christopher Street Liberation Day. 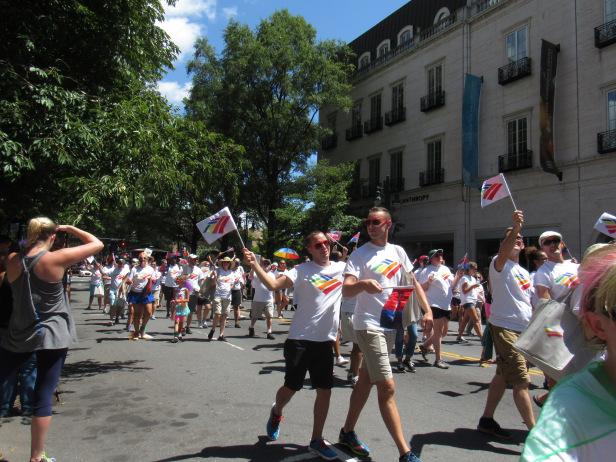 The first Pride March was held in New York City in 1970 to commemorate the Stonewall Riots, one year after they took place. The march was planned primarily by “Mother of Pride” Brenda Howard, a bisexual feminist from New York. Instead of Pride, it was called Christopher Street Liberation Day. A short biography of Howard was published by The Advocate in 2014. 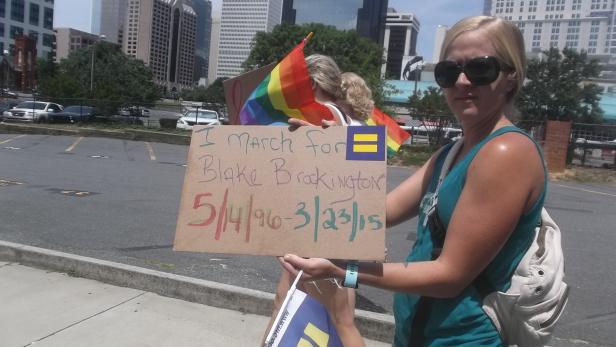 A participant in the March for Equality in Charlotte holds a sign in memory of a transgender activist who committed #suicide after years of #discrimination.

Homosexuality was removed in 1973 from the Diagnostic and Statistical Manual of Mental Disorders (DSM) and replaced with ego-dystonic homosexuality which applied only to unwanted homosexual orientations. In 1986, this diagnosis was removed as well. The DSM also removed gender identity disorder and replaced it with gender dysphoria in 2013. While homosexuality is not considered an illness, the stigma and discrimination faced by the LGBT community leads them to be more at risk for mental illness. 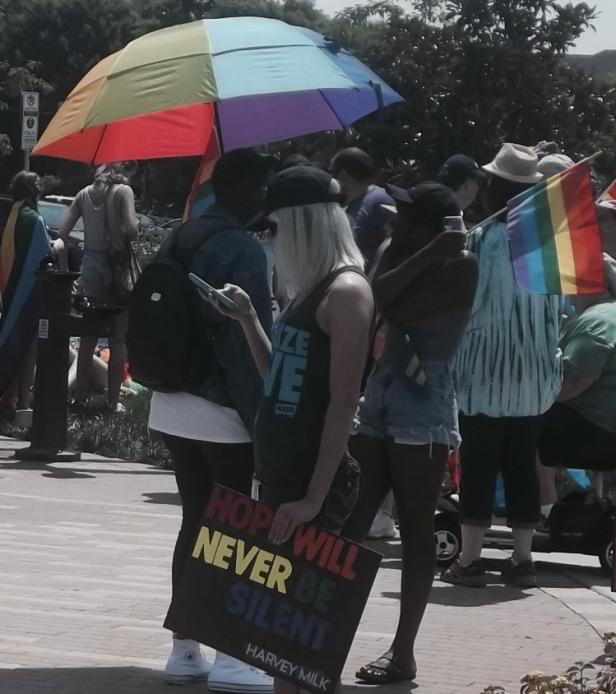 A protester holds a sign during the Equality March in Charlotte NC, 2017.

Harvey Milk was assassinated in 1978 by Dan White, the former city supervisor of San Francisco. The 2008 film Milk goes into the relationship between two men as it documents Milk’s political career. 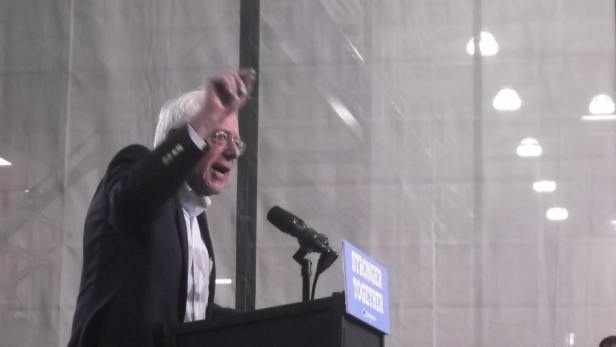 The Democratic Party took its first official stand on gay rights in 1980, adding equality regardless of sexual orientation to the civil rights section of their platform. Upon the early formation of the Green Party in 1984, gay rights became part of their platform as well. The Republican Party has yet to make any platform of general statement in favor of gay rights, opting instead for dog-whistle language about so-called family values. In 2016, the Republican Party platform states “Every child deserves a married mom and dad.”

The AIDS crisis is associated with gay men because it decimated the community when it first came to the U.S. While HIV/AIDS is still prevalent in the gay community, the virus is spreading most quickly to young men of color in the U.S. This is attributed to a stigma against gay men in the black community and the disproportionate imprisonment of these young men, as well as a disproportionate lack of access to healthcare. Transgender women of color are also at an increased risk for contracting HIV, and are sometimes mistakenly included in relevant statistics as men. The CDC tracks transmission rates among ethnicity, race, sexual orientation, and geographical area. 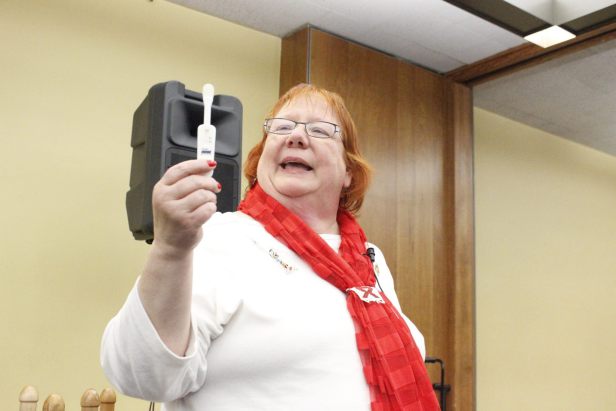 #Sex education which includes the LGBTQ community is rare. No state requires LGBTQ-inclusive sex education, while eight states currently bar it. This is compared to just two states that bar a promotion of religion in sex education programs.  A bill was introduced in the Senate last year that would stop the Department of Health and Human Services from providing grants that give misinformation or no information about LGBT relationships. The Real Education for Healthy Youth Act was introduced last session but was never voted on and would have to be reintroduced to receive a vote this year. 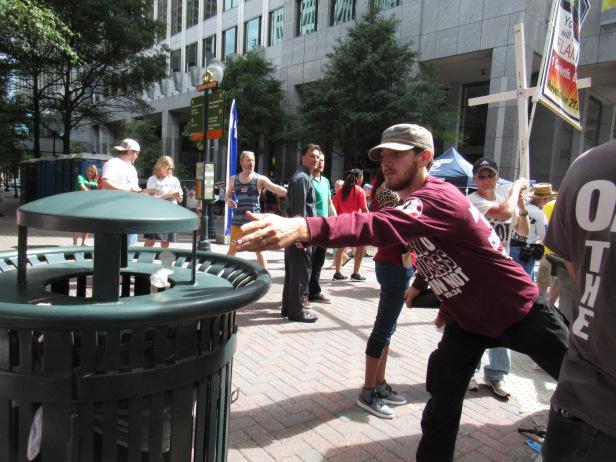 A street preacher throwing away a condom at Charlotte, NC Pride, 2016.

The AIDS Coalition to Unleash Power (ACT UP) was formed in response to the AIDS crisis. The group staged protests against the government’s lack of concern about the crisis under President Ronald Reagan, and these protests continued until the Clinton administration. The documentary How to Survive a Plague focuses on the crisis and the group’s actions. Several members of the group are still alive thanks to the discovery of dozens of relatively successful HIV drugs released since the 1990s. There is no cure for HIV yet. 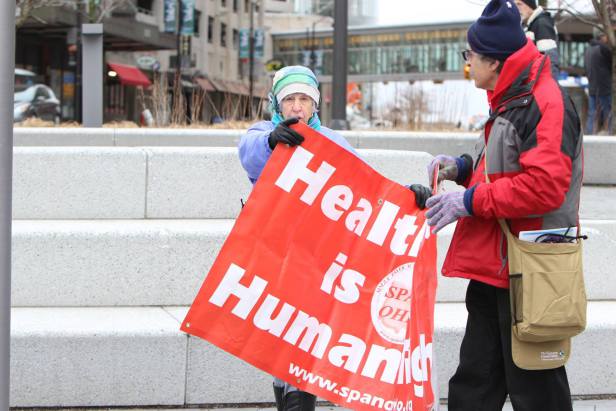 President Bill Clinton signed the Defense of Marriage Act (DOMA) in 1996. The law denied benefits to gay couples in the event that #gay marriage became legal and allowed states to refuse to recognize marriages in other states. Clinton did not disavow the law until 2013. 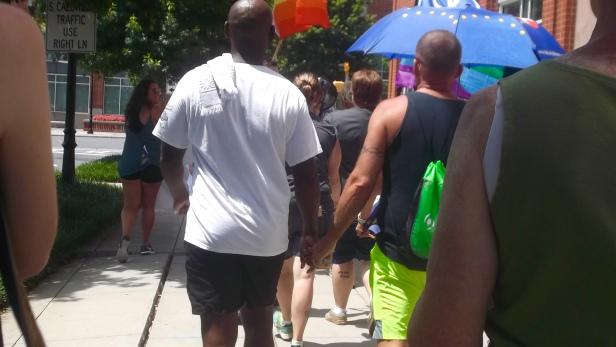 The word queer was used against the gay and trans communities for decades, but in recent years many people have begun to reclaim the term by using it to describe their gender and/or sexual orientation. This reclamation and the word itself remain controversial in the LGBT community. 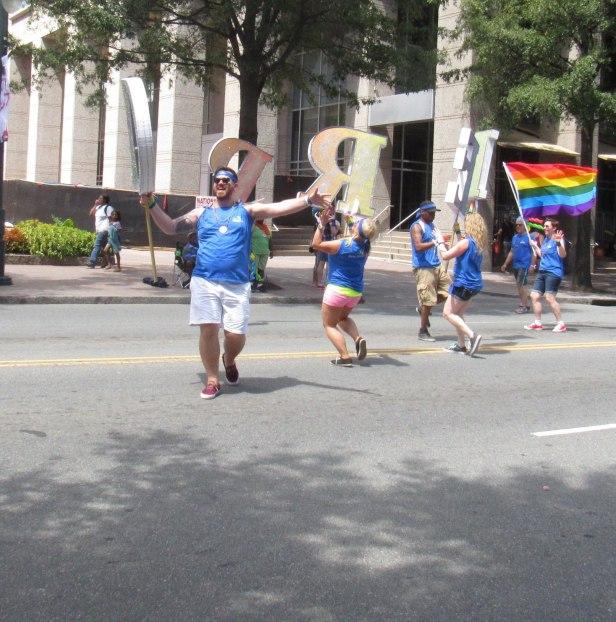 In 2003, sodomy laws were overturned in the Supreme Court case, Lawrence v. Texas. This came after the Court’s 1986 ruling which upheld sodomy laws in Bowers v. Hardwick. The laws had been in place since the country’s founding, with one law proposed by Thomas Jefferson calling for the death penalty as punishment. 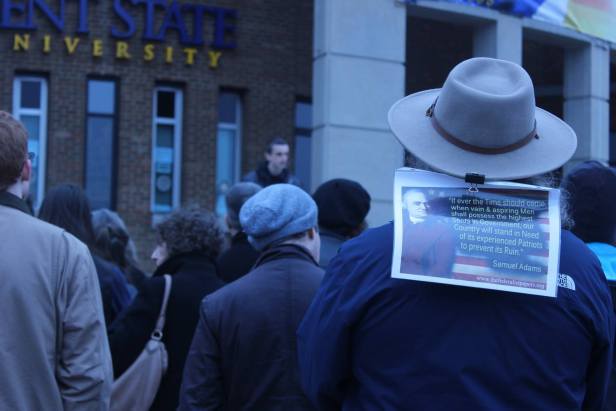 A rallier with a sign quoting Samuel Adams taped to his hat at a Constitution Day rally in Kent, Ohio, 2017.

Six years after Lawrence v. Texas, Congress passed the Matthew Shepard and James Byrd Jr. Hate Crimes Prevention Act. This law requires the FBI to track hate crimes against LGBTQ people. However, this only expands federal law and taking cases to federal court can be expensive.

Some people criticize hate-crime laws, however. The LGBTQ legal nonprofit, Sylvia Rivera Law Project, opposes hate crime laws because, like other “tough on crime” laws, they target marginalized populations and perpetuate mass incarceration. Hate crime laws increase penalties for actions which are already criminal, and they also frame police as allies to the LGBTQ community despite a long history of police abuse toward them. 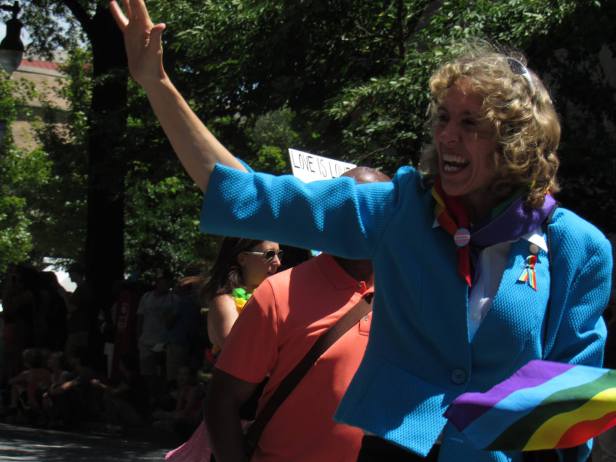 Charlotte, NC Mayor Jennifer Roberts marching in the city’s 2016 Pride celebration. Roberts and the city council brought a non-discrimination ordinance to the city after two years of debate, and it was overturned by the state of North Carolina in a one-day session by the passage of HB2.

Marchers rally during the March for Equality in Charlotte, NC, 2017

On June 26, 2015, same-sex marriage became legal across the U.S. The Supreme Court decision Obergefell v. Hodges came exactly 12 years after the decision striking down sodomy laws. The Obama administration celebrated the ruling by lighting the White House in rainbow colors. 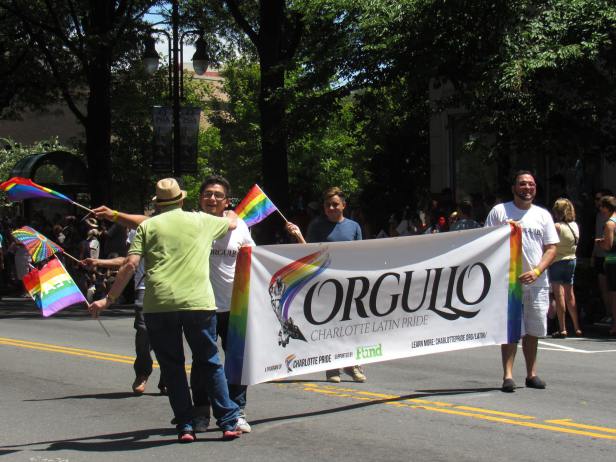 The Orlando nightclub shooting took place one year ago. A man named Omar Mateen killed 49 people and wounded 53 others on Latin Night at Pulse, a gay bar in Florida. Mateen claimed to have ties to ISIS, but the FBI found no evidence of this. A number of fundraisers raised millions of dollars for the victims and their families. Local mosques encouraged members to donate blood despite the shooting taking place during Ramadan, a period of fasting that could lead to medical issues while donating. 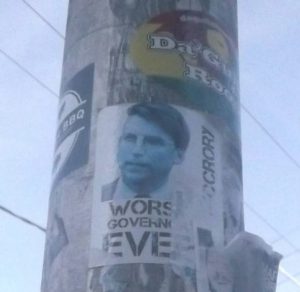 Trans people face higher rates of violence than cisgender people. This year, at least 15 transgender people have been murdered, surpassing the rate at this point in 2016, which was already the highest trans murder rate in recorded history. Trans women of color are most at risk.

There is very little information on the commonality of transgender people because many of them are closeted due to stigma or fear of discrimination and violence. However, it has been shown that forcing people, particularly children, to conform to the stereotypes of their assigned sex can be extremely harmful, increasing their risk of mental illness.

The March for Equality took place on June 11, 2017, as LGBTQ people around the country marched with other marginalized communities to protest the Trump administration’s trans- and homophobic policies.

Editor’s Note: This article was originally published by Charlotte on Acid and has been edited.

On Wednesday, a Survivor contestant, Jeff Varner, outed his competitor, Zeke Smith, as #transgender. Varner then accused Smith of being deceptive. “Why haven’t you…