The 2016 presidential election is right around the corner, so voters on either side of the aisle are looking to their respective candidates to decide where they stand on the issues.

While both the Republican and Democratic parties are fairly clear about where they fall when it comes to social justice issues — specifically #LGBTQ rights– the candidates representing each party have not always been so clear.

Shifting Towards Being an Ally

Democratic nominee Hillary Clinton has not always been open about her stance on LGTBQ rights. According to an article in the New York Times, it took Clinton until 2011 to openly support gay marriage and the LGBTQ community as a whole.

Clinton had an chance to become a leader in the gay rights movement in her first presidential campaign in 2008 but didn’t take it, according to an article in The Washington Post. Clinton allegedly told friend and political consultant Hilary Rosen that she didn’t know how to support LGBTQ rights with a “religious and family context.”

Clinton’s views on LGBTQ rights — while have changed — were in line with that of the Democratic party, which didn’t officially embrace the LGBTQ community until same-sex marriage was added to its platform four years ago.

Democratic Vice Presidential Nominee Tim Kaine also said he opposed same-sex marriage in a 2005 campaign ad during his successful run for Virginia governor, according to an article in The Washington Post. His position shifted — first toward support of civil unions and then for same-sex marriage — by the time he ran for the Senate in 2012.

“While [they haven’t] always openly supported LGBTQ rights, the most important thing is that [they do] now,” said #Kent State College Democrats Communications Director Alexis Atwater.  “Everyone has changing opinions, and I’m sure many of us know someone in our lives that maybe didn’t support the right to marriage equality and eventually came around to supporting it.”

Despite previous reservations, Clinton and Kaine are now firmly on board in supporting LGBTQ rights, stating on their campaign website that lesbian, gay, bisexual, and transgender Americans deserve to live their lives free from discrimination. 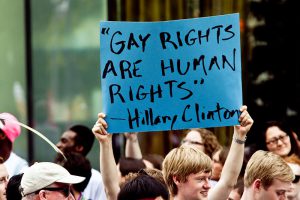 According to Clinton’s campaign site, once in office she will fight for full federal equality for LGBT Americans, support LGBT youth, parents and elders, honor the military service of LGBT people, fight for an AIDS-free generation, protect transgender rights and promote human rights of LGBT people around the world.

So no matter where she started, she seems to be pretty clear on her stance now — despite the time it took her to get there.

“I truly believe that when Hillary says ‘Gay rights are human rights,” she means it,’ said Atwater.

Republican presidential candidate Donald Trump has also been unclear on his stance for LGBTQ issues. While he represents a party that has opposed most LGBTQ initiatives, Trump has not made an official comment about LGBTQ issues on his campaign site.

After the tragic Orlando Pulse Nightclub shooting in June, however, Trump said in a speech that he believes that he is a more appealing candidate to the LGBTQ community than Clinton.

Trump has reversed his position on North Carolina’s anti-LGBTQ law, “HB2,” which prohibits cities from passing local non-discrimination ordinances and forces trans people to use public restrooms which correspond with the gender listed on their birth certificates. Initially, Trump opposed the law, citing its economic detriments. However, after criticism from the right-wing, he reversed and said states should decide whether discriminating against LGBTQ people should be allowed.

“Ask the gays what they think and what they do,” said Trump. “Not only Saudi Arabia, but many of these countries, and then you tell me — who’s your friend, Donald Trump or Hillary Clinton?”

While Trump has not been especially forthcoming when it comes to LGBTQ issues, his running mate, Vice Presidential Candidate Mike Pence, has made his stances very clear.

Pence is most known for signing into law the controversial Religious Freedom Restoration Act in Indiana, that would allow businesses to deny service to people — namely members of the LGBTQ community — based on their religion.

According to a Time Magazine article, Pence also opposed the repeal of “Don’t Ask Don’t Tell” in 2010, stating  he did not want to see the military become “a backdrop for social experimentation.”

Pence also said that “resources should be directed” to gay “conversion therapy,” a widely discredited and arguably harmful practice which attempts to “convert” LGBTQ people.

Recently, Pence criticized the Obama administration directive on transgender people’s bathroom rights, saying that it should be a state issue. 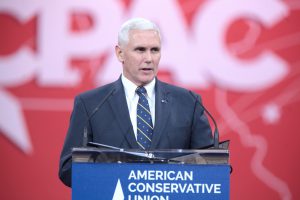 “The federal government has no business getting involved in issues of this nature,” Pence said.

So while Trump has remained uncharacteristically quiet when it comes to LGBTQ rights, his running mate has not.

When reached for comment, a representative from the Kent College Republicans was unavailable to respond.

For more information about both Hillary Clinton’s and Donald Trump’s stances on the issues, you can visit each of their campaign sites below:

For the fifth time since 2011, Democratic state Sen. Nickie Antonio of Lakewood has introduced the Ohio Fairness Act.  The Act would provide protection…